As I walked to the Mexican Consulate on a blustery winter day in New York City last week to join a protest calling for justice for the 43 missing university students of Ayotzinapa, Mexico, I began to think of warmer days that did not require layers and gloves. For some reason, I thought of my Pop’s hands.

He has these rough, calloused hands with scars near the tips of his fingers from the years he spent as a farm worker. As a kid growing up in the suburbs of LA, far removed from the back-breaking labor of the fields of central California, I would stare at them and naively ask when I would get hands like his.

As I approached the consulate, I shook hands with Felipe de la Cruz Sandoval, a professor at the Ayotzinapa Rural Teachers College in Guerrero, Mexico from which the 43 students were forcibly disappeared last September, and was instantly reminded of my own father. 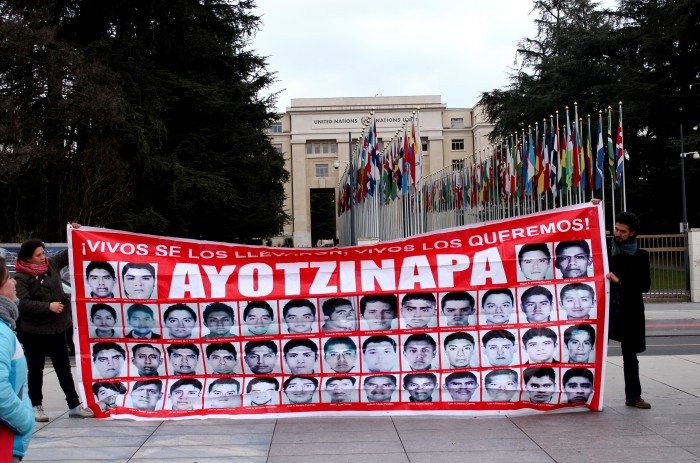 As dozens of others joined Felipe to demand justice for the missing students, for their families, and for his son who miraculously survived the attack, I better understood how ending the war on drugs is a Latino issue and needs to be a top priority for national Latino advocacy organizations.

From passage of marijuana prohibition in El Paso a century ago to the failed drug policies of the Regan administration and President Obama’s extension of the Mérida Initiative, a plan under which he U.S. gives hundreds of millions of dollars to Mexico each year —the vast majority of which is funneled into the disastrous and failed war on drugs— Latinos have been paying dearly, sometimes with their own lives, for American prohibition without having a seat at the policy making table.

That’s why Professor De la Cruz’ journey to NYC was so momentous he was there to announce a national tour (Caravana 43) of some of the victims’ parents and fellow students set to take place across the United States to share their tragic story and demand an end to the failed policies that killing our children.

With more than 70,000 people having been killed in Mexico alone as the result of Drug War related violence since 2006 —not to mention the countless disappeared and the 50,000 unaccompanied minors who arrived at the U.S. border in search of refuge from drug war related violence last year— Latinos need to come out in support of La Caravana, Professor Felipe De La Cruz Sandoval and the families of the 43 students to demand an immediate end to the failed war on drugs.

Jerónimo Saldaña is the legislative and organizing coordinator for the Drug Policy Alliance. You can follow him @JeronimoSaldana.