Phoenix, Arizona. Pale blue sky blushes at sunset. The heat still feels just warm on the skin this time of year. Food trucks serve up some of the best tacos this side of the border. It‘s been five years since SB1070 was signed into law. Governor Jan Brewer and state Senator Russell Pearce are out of office. Sheriff Arpaio is barely holding onto his position after being found guilty of racial profiling. As the ink dries on the story of SB1070, the racial profiling bill reaching the fifth anniversary of its signing just yesterday, it must not be remembered simply as a political hiccup, but as a tremor of reaction to demographic change.

The authors of SB1070 sought to paint an emergency in order to incite fear, create a dilemma to veer the country towards a policy of punishment and self-deportation. Openly written into its preamble, they stated “The legislature declares that the intent of this act is to make attrition through enforcement the public policy of all state and local government agencies in Arizona.” 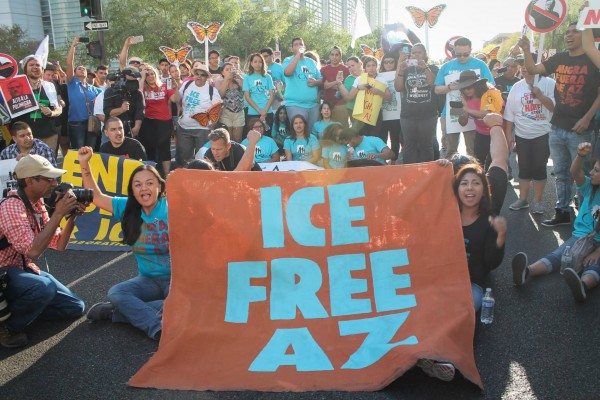 While written as an immigration bill, SB1070 was a particular affront for Latina/os and Chicana/os. It vandalized our history, wreaked havoc on our present and denigrated our future. And given that 95% of those deported in the past five years were Latino, signified a front line in our broader pursuit for dignity in this country.

The impact was made most clear in the story of a little girl, Katherine Figueroa, who in 2009 while watching television after school and saw both of her parents arrested by Arpaio’s sheriffs in a work site raid.

A year before the state gained notoriety with SB1070, she pleaded publicly for their release and in her efforts humanized an issue that had become politically toxic. Her story was eventually featured in a documentary film, “Two Americans.”

A few months ago that same young woman celebrated her 15th birthday with a quinceñera, alongside both of her parents and her little sister. The family successfully advocated for the right to remain, one victory amongst so much pain.

The tension and strife leading up to SB1070 and in its aftermath are not an anomaly to be attributed to a few extremists. In fact, people living in states and localities with growing majority-minority populations are facing similar reactions. In 2010 Arizona had a population foreshadowing the shift to come. The highest number of people under the age of 18 are now brown while white people make up the highest amount of those aging past 65. SB1070 is not simply a mean spirited law. It’s part of a larger trend that seeks to defend the status quo and maintain power in the same hands despite demographic change.

In the face of political overreach, many of Arizona’s political and business leaders have made it a priority to repair the state’s image and voice their support for diversity. But the rhetorical correction does not change the still-standing intent or the on-going impact. In the Arizona of today border communities still live in a constitution free zone. Immigration and Customs Enforcement agents still operate with impunity in local jails. And police officers are bound by law to inquire about the status of people they stop and deem suspicious of being “illegal.” Migrant and communities of color are over-policed and still face discrimination.

The vigilance with which Latinos rose to resist SB1070 is still necessary today. Because if we understand SB1070 as a warning and not simply a hiccup then surely more will come. At times as blunt as the police shooting of Antonio Zambrano-Montes in Pasco, WA but more often in more nuanced forms.

History shows that social progress is often followed by backlash that comes in violent fits as well as calculated recalibration. It is not a coincidence that the declaration of the War on Drugs and exponential increase of number of people incarcerated followed the Civil Rights and Black power movements. Or, contemporarily, that the emerging legislation for the religious freedom (i.e. freedom to discriminate) in places like Indiana is following on the heels of the near secured victory of marriage equality for LGBTQ people.

Five years after 1070, the cameras are gone and life goes on. On the surface it may seem like things are back to normal. But appearances are only skin deep, and the scars are just below the surface. Communities in Arizona courageously resisted that attack and managed to also become a beacon of hope against extremism. But it has not been without a cost. Thousands have been deported. Many who were able to prevent their removal are in limbo, without work authorization or lawful status. Others now carry felonies on their record as a result of the notorious Sheriff’s raids, including members of the Figueroa family. They are ineligible for deferred action, and likely would be excluded from most immigration legislation. In an era of hyper enforcement and prejudiced policing, immigrant families are now not just mixed immigration status, but also increasingly mixed status with criminal convictions. That’s why, in places like Arizona, the words spoken by President Obama, that relief is extended to ‘Families not Felons’ ring hollow in a certain way. For Katherine Figueroa, it most certainly does.

Marisa Franco is the director of the #Not1More campaign.

One response to “Five Years Later, SB1070 Was Never Just About Immigration”