Deportations and the Death of the ‘Loyal Latino Voter’ in 2016

“They’re no better than the Republicans,” says Ramón, my 92-year-old Salvadoran immigrant father, while watching another local news report featuring a family sad and angry at the deportation of the male head of the household. “If this continues, I’m not going to have a reason to go vote next year.”

Such refrains from Latino voters like my father aren’t really news in an era in which some are trying to make deporting people an all-too-normal occurrence, much like the failing (thank goodness) efforts to continue normalizing police violence and murder. But when you consider that such statements are coming from Papa Mon, a lifelong Democrat who has not missed a vote since becoming a citizen many years ago, the dimensions of the crisis facing immigrants, political parties and the entire country are clear.

Though he has known of deportations since before the Bracero era, when more than 500,000 people were deported over several years, my father has never accepted or liked deportations—or the politicians that execute them. Polls taken in the Obama era —an era defined by more than 2 million deportations, most of whom were Latinos with no criminal record— indicate that the majority of Latino voters will share my father’s lifelong repudiation of deportations. And therein lies the crisis facing us all, especially the Democrats: the deportation crisis and how it will kill the “loyal Latino voter” of times past.

As the country watches the rioting and rebellion in Baltimore and with almost all major presidential candidates at least mouthing statements about reforming the prison system, few to none are talking about the silent immigration crisis that jails hundreds of thousands of mostly (98%) Latino immigrants and deports millions more. But as Papa Mon’s disillusion and lifelong rejection of deportation indicates, most Latinos will never grow to accept the failed immigration policies that border wall the political imagination of Republican and Democrat alike.

Unfortunately for both parties, few to none of us are in a mood to do anything but abolish the multi-billion dollar system that destroys families by the tens of thousands, terrorizes children and humiliates all but the die-hard party loyal. Many like my father have come to expect and reject what they perceive as the cynical calculations of Republicans, who have banked on (and benefitted from) anti-immigrant, anti-Latino policies that appeal to a segment of the white electorate. In their efforts to stave off white flight from their party, Democrats like Obama have lowered the moral bar on immigration to unprecedented lows by reaching record highs in terms of jailing and deporting immigrants. As a result, polls of Latinos show a clear decline in interest in the Democratic party. 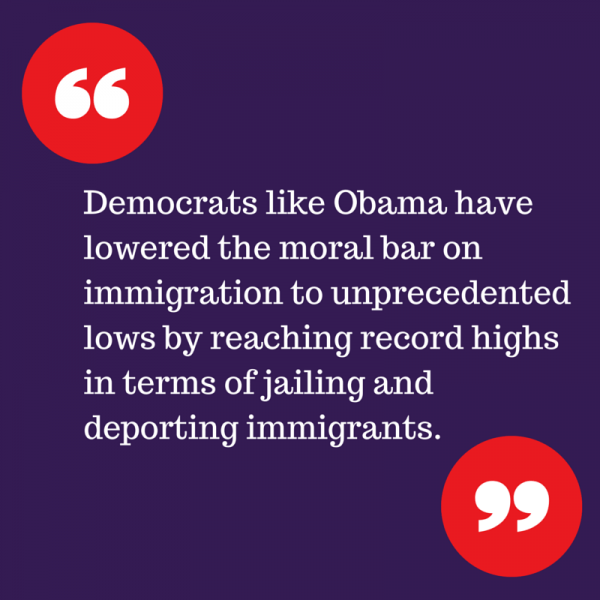 After activists forced Obama’s hand to use executive authority he and his operatives claimed he didn’t have, polls showed broad Latino support for Obama’s announcement of the DACA and DAPA programs, the executive actions designed to stall undocumented deportations of students and their parents, respectively. Unfortunately, DACA and DAPA are held up for an undefined period of time, with some legal experts even saying that the Obama Administration may actually lose the case and be forced to end the programs. Experience points to the probability that Latino and other activists will soon ramp up efforts to again pressure the Democrats to do something to stop the deportations, which continue throughout the country.

Before such a situation, the preferred responses of Democrats and their defenders in the Latino community will likely be variations on previous approaches: blaming Republicans for everything, including deportations, lying (i.e., Obama officials saying he was mostly deporting “criminals” while also saying he had “no executive authority” to introduce programs like DACA and DAPA) and diverting attention from deportations with loud cheers of “¡Sí Se Puede!” at events studded with Latino actors and “Latino leaders” incapable of even saying the word “deportation.”

Though they proved effective for a moment, such approaches now smack of the rotten food served to men, women and even children, in the private immigrant prisons millions of Latinos hear about on Spanish-language television and (more directly) from families like ours. Lest we see an awakening among politicians and Latino political consultants who really (and mistakenly) believe that “Latinos have no choice and will vote for us, regardless of what happens on immigration,” the immigration crisis brought to you by Republicans and Democrats will continue.

Besides the undocumented themselves and besides Obama and his Latino legacy, the biggest losers in this continued crisis of political imagination are Hilary Clinton and the Democratic party she may soon lead. Even before announcing her candidacy, Clinton found herself the object of political actions by DREAMers and other activists concerned about her positions with respect to the deportation crisis. Clinton’s recent actions —her repetition of Obama tropes on “the need for comprehensive immigration reform” and her pronouncements in favor of deporting Central American women and children back to countries where they fled the rape, exploitation and murder— point to the likelihood that the Democratic operatives who believe there’s no limit to punishment and suffering Latinos will stomach in the name of party loyalty still have jobs.

Without overcoming their radical right wing, Republicans will not likely benefit from growing disillusionment among Latinos because of the Democrats’ deportations. But the political calculus heard behind closed Democrat doors in 2012 will not hold. The cynical logic of “They don’t have a choice” is already dead in 2015, previewing the likely death of the “loyal Latino voter” in 2016.

Short of creating or joining a third party (an option that will grow more serious in 2016), the beginning of any serious effort to re-animate the Latino electorate must begin and end with two things, one practical, one necessary: stopping the Bush-Obama deportation machine and sparking the political imagination that inspires movements and voters alike. The opportunity to combine the two sits before both parties, who can do U.S. politics a favor by putting forward smaller, more doable proposals than either the behemoth “comprehensive immigration reform” proposals or the blind rush to militarize the border. Such a third way will appeal to Papa Mon and the millions like him who will grow old rejecting mass deportation and the politicians that push it.