You may have heard the abbreviation TPP in some background noise, or seen it on a screen at one point. Maybe you even heard a brief discussion about it in what passes for news coverage on TV. But even if you know that TPP means Trans-Pacific Partnership, you may not know what it really means.

Don’t worry: only about 700 people really know… and they are definitely not talking about it.

Before delving deeper into the topic, let’s hit the sweet spot head-on: the TPP will do more damage to U.S. immigration and immigrants than NAFTA ever did.

And rest assured, NAFTA created new waves of immigration and severely altered public policy, to the extent that immigration is now headed towards a future where foreign workers may get many if not most jobs in some industries, while having as many rights as medieval serfs.

This is not exaggeration, as Part 1 of this essay sets up the background on the Trans-Pacific Partnership, and Part 2 will lay out the treaty’s known provisions and potentially ruinous effects on immigrants.

What is the TPP?

So what is the Trans-Pacific Partnership? It is a treaty, under negotiation, involving the United States with 11 other countries, ranging from Vietnam and New Zealand to Chile and Mexico. 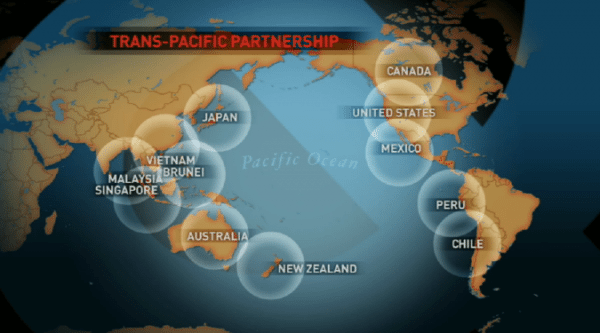 The treaty is trying to promote free trade amongst all 12 countries and covers topics such as intellectual property, investments, services, Internet access, food safety, pharmaceutical products, agriculture, and yes, immigration. To say that the TPP is “extensive” and “far-reaching” is to understate the case: it is in all ways either a historical economic boost on a global scale or a massive power grab by multinationals, with almost no middle ground. It is no coincidence that both supporters and opponents to the TPP call it “NAFTA on steroids,” for the implications of its contents —whatever they seem to be— are huge.

Part of the problem with the TPP is that its negotiations are secret. Not the “open rounds” (about 20 in all) that have taken place, but the ones that matter most to Americans: the ones taking place in Congress. There the TPP is being handled like the economic version of the Manhattan Project—only a handful know what’s going on and woe to him or her who reveals it.

Lest you think this is an exaggeration, take a look at how the TPP is being “presented” in Congress:

Just recently, President Barack Obama was disingenuous enough (in a charitable assessment of his motives) to challenge TPP opponents to pinpoint what about the treaty was objectionable to them. Not to overstate the obvious, but that’s hard to do when the subject at hand is actually kept secret.

Add to this the fact that the Obama Administration has been pushing hard for the TPP to receive “fast track” status, meaning it can be negotiated exclusively by the Executive branch and then presented for de facto approval to the Legislative branch (meaning the House and Senate). Fast-tracking a treaty, a procedure created during the Richard Nixon Administration, simplifies approving treaties by removing Congressional oversight, reducing the votes needed for approval from 2/3 in either House or Senate to a simple majority and making the treaty provisions secure from modifications (i.e., the treaty is approved as given or it is rejected entirely). Of over 520 treaties approved by the U.S. since fast-tracking was instituted in 1974, only 16 have received such treatment, and none have been anywhere as extensive as TPP intends to be.

But here’s the kicker: a treaty negotiated under “fast track” terms supersedes the Constitution under U.S. law.

You read that correctly: the TPP would override Constitutional statutes. And under fast-track protocol, Congress cannot amend or modify the treaty after it passes.

And all this ties into immigration (among other topics) because immigration policy has largely been the purview of Congress, has been occasionally taken over by the Executive branch (most lately by President Obama on granting legal status to current illegal immigrants) and under the known provisions of the TPP, immigration policy will fall not under Congress or the Oval Office, but in the hands of multinational corporations.

Given all this and the “more” in the background, is it any wonder then, that under conditions like these, the TPP has raised deep concerns, to the extent that even Democratic party leaders such as Sen. Elizabeth Warren and other key Democrats are challenging the process and President Obama, causing Sen. Warren to remark:

I have heard the argument that transparency would undermine the Trade Representative’s policy to complete the (TPP) because public opposition would be significant. In other words, if people knew what was going on, they would stop it.

How did NAFTA affect immigration?

The immigration angle is obviously the key component of the overall risks, but to understand that aspect properly, one has to delve into the historical and economic factors that led to the current immigration scenario. And those factors are directly a result of the North American Free Trade Agreement, NAFTA.

NAFTA was the treaty signed by Mexico, Canada and the U.S. in 1994 to establish a free trade zone (with limitations in many areas) between the three countries. Supporters of free trade agreements (FTAs) and NAFTA in particular said it would galvanize the economies in all three nations, balance out differences in trade and manufacturing processes and, in the case of Mexican workers, raise their wages and standard of living to reduce the income gap with its northern partners. In this way, supporters claimed, immigration from Mexico to the U.S. would drop until in about 2025 or so, it would pretty much cease (for “better wages” reasons).

Even the most vehement supporters of NAFTA (and there were plenty amongst multinationals and both major U.S. parties) conceded that, over the short-term, immigration from Mexico to the U.S would increase. But although NAFTA was supposedly designed at reducing the need of immigrants to go north in search of opportunities for a better life, it did the opposite: it gutted large swaths of the Mexican economy, particularly in agriculture and textile manufacturing and led to the largest increase ever in legal and illegal immigration across the U.S. southern border.

The influx was expected, but not the extent and duration of it, as small farms withered and were sold off to multinationals, often for less than five cents on the dollar, and manufacturing jobs, once the backbone of both nations’ upwardly mobile workforces, were gutted by lowered wages, vertical integration and law-busting treaty provisions that forced workers into subpar working conditions.

The small farms of Mexico, prior to 1994, had net export balances and, same as the U.S., were subsidized by the government. With NAFTA, U.S. subsidies to corn farmers increased, allowing for cheap corn to flood the Mexican markets. The small farmers in that country had little choice but to either drop the price of their crops and take losses or resort to chemicals (fertilizers, pesticides, etc.) to enhance their yields. That most of these products (and modified seeds) were sold by U.S.-based companies, and was seen as a net gain for the U.S.

Small farms in Mexico started failing and by 1998, large multinational firms owned most of the corn-growing lands in Mexico, many in partnership with U.S. growers. Through vertical integration, these new Mexican power brokers of corn were now growing corn for less cost than before (the Mexican subsidies were almost all given to the largest farms), but corn prices to the general public went up almost 180% by 1999. In a country where corn is a daily staple in almost every meal (“Sin maíz no hay país”), the impact was devastating.

In manufacturing, the more insidious side of FTAs such as NAFTA came to light. U.S.-based textile manufacturers moved their operations to Mexico in order to take advantage of lower wage scales and fewer (much fewer) environmental concerns. As NAFTA mandated a 20-kilometer “trucking zone” north and south of the U.S.-Mexico border, this same zone was used to designate an “FTA manufacturing zone,” where U.S. and Mexican law were subsumed to the needs of companies operating under NAFTA. This was later expanded to all of Mexico, but the logistics —and established modus operandi— continued to favor the border zone.

This is how many U.S. workers found themselves out of work, as capital flowed south in pursuit of lower costs (often a blunt euphemism for “fewer legal restrictions on mistreating people and the environment”). South of the border, Mexican workers, who in many ways had better protections under the law than U.S. workers (on average, more paid holidays, longer paid sick leaves, higher overtime pay, and more) then found themselves faced with the choice of losing their jobs as well or buckling under to new conditions that often slashed their pay as much as 80% and did away with their all their benefits.

But at least they had a job—or the option of going north. And like their farmer brethren, the move north went from stream to flood.

As if NAFTA weren’t enough, the Central American Free Trade Agreement (CAFTA), signed in 1999 involving five countries in Central American along with the Dominican Republic (making it CAFTA-DR), also replicated the economic gutting of small farmers and independent manufacturers, leading to increased migration of Hondurans, Guatemalans, Salvadorans (and other nationalities) into Mexico and then the U.S., while some Dominicans chose to brave fierce ocean tides to reach Puerto Rico and then find a way into the States.

If not for the clamp down on immigration that resulted from the Twin Towers and Pentagon attacks of 2001, the percentage increase of immigration from Mexico since 1994 and NAFTA’s implementation, might have reached 250% or more instead of “just” 198%. Building a wall across a border seems ridiculous to most everyone when only a handful of people cross over, but when it becomes a double-handful every day, then a wall starts to sound almost reasonable.

But the wall is just an object: it’s the mentality behind the idea of the wall that concerns immigrants, and should, for TPP will make a wall either mandatory or totally superfluous.

Editor’s Note: In Part 2, the author details the threats to immigration and free trade enclosed in the Trans-Pacific Partnership.

Gil C. Schmidt is a Grant Development Specialist with Resource Associates, focusing on Hispanic communities nationwide. Gil is Puerto Rican, grew up mainly in the Deep South and the island, and can’t drawl in either English or Spanish. He can be contacted at gilcschmidt@gmail.com. He tweets from @GilTheJenius.