Despite garnering over 50,000 signatures to an online petition asking that the Obama Administration not cut back on health care benefits to Puerto Ricans living on the island, this past Monday the Puerto Rican Healthcare Crisis Coalition (PRHCC) issued a strong statement, saying that June 8 decision by the government’s Centers for Medicare and Medicaid Services (CMS) to cut Medicare Advantage benefits in Puerto Rico by 11% was “a blow to the health of the entire Puerto Rican community.” 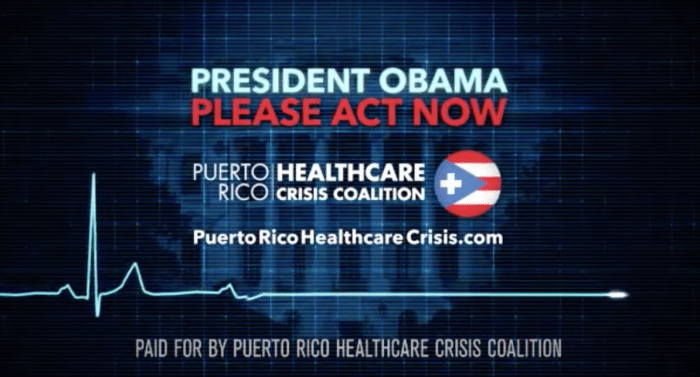 According to those closely following the situation in Washington, D.C., there were indications as late as Monday that CMS would hold back from the proposed cuts. However, letters (see below) from CMS to both Sen. Chuck Schumer (D-NY) and Puerto Rico’s Resident Commissioner Pedro Pierluisi (D), a non-voting member of Congress, confirmed that the cuts would proceed, but that CMS would be open to keep working with those individuals and groups who were following this issue. Once the CMS letters reached the offices of Schumer and Pierluisi, PRHCC Chairman Dennis Rivera shared this statement:

In 2008 when he was campaigning for President, Obama acknowledged that Medicare funding levels for Puerto Rico are [sic] ‘insufficient’ and promised that he would ‘work closely with the government of Puerto Rico and Congress to strengthen the federal government’s investment in the health of the people of Puerto Rico.’ This promise has been broken. Puerto Rico’s healthcare system was already teetering; President Obama’s actions will potentially push it over the edge.

Now is the time for all 7.5 million Puerto Ricans to fight the outrageous discrimination against the people of Puerto Rico.  Everyone needs to unite and sign the petition at puertoricohealthcarecrisis.com or call 787-665-2020.

The following two documents are what the Department of Health and Human Services sent to Schumer’s office (similar documents were sent to Pierluisi’s office). They explain the reasoning as to why CMS decided to continue with the cuts. In short, CMS conducted a larger sample size than what was done locally, thereby making different conclusions from what local Puerto Rican officials are claiming. The documents also contain a desire by the federal government to worker closer local officials and interested parties.

June 8 Letter to Sen. Schumer from DHHS by Latino Rebels

Last week, Pierluisi introduced a comprehensive bill to Congress, called “Improving the Treatment of the U.S. Territories Under Federal Health Programs Act of 2015.” He also took to the floor of Congress to discuss the bill: