I just got off the phone with my mother. She just wrapped up a short account about how much work they have had at their business in the past couple of weeks—most of it centered around the sheer amount of clients and calls they have received, all good things, but also about how tired she is… about how tired my dad is.

“Tu padre está en el negocio, trabajando,” she concludes. (“Your dad is at the business, working.”)

This is not an unusual thing. Many parents have to take time out of their weekends to make sure that they are able to provide for their families. More often than not there isn’t an end to the workweek. For my dad, this whole notion is different.

My father has always been a self-employed man. One of six children, he grew up in Caracas, Venezuela—and by no means was he the perfect child. Growing up, young Saúl was kicked out of more schools than he cares to remember, which forced my grandmother to send him off to boarding school. He managed to get kicked out of there as well.

My father met my mother, Vilma, during his college years. Or at least that is the version of the story they have always told my brothers and me. “Fue amor a primera vista” love at first sight, my mother has always described to us, and 30 years later it is still true.

Back in 1998, my mother talked my dad into moving to the United States. She conveyed to him how much she feared that my brothers and I would have to grow up in a country that offered us nothing but uncertainty. After some back and forth, my father agreed, and in the year 2000 we were set to go.

I don’t remember much throughout the transition. Perhaps it was ignorance towards the emotional sacrifice my parents had committed to make for us, or perhaps it was my sheer excitement about coming to the United States that clouded my better judgement. Then again, what does an 11-year-old know about leaving loved ones behind, memories, family—abandoning everything to start back from square one, in hopes that it will work out for the best. In hopes that the sacrifice is worth it.

One Wednesday morning, an August day in 2009, my father walked into my room to tell me that “immigration police” was downstairs, inside our home. I asked my father what would happen to us, and in the most sincerest of ways he replied “I do not know. Please get ready and come downstairs.”

Nothing really came from that episode. I think that the aftermath was trying to rebuild my parents from the emotional damage they endured that morning. Both of them were scared, angry, sad, worried. My mom was noticeably a lot more distraught than my father—Saúl just stood there in silence, reeling in from what just had occurred.

It was not until 2012, when my father was once again trapped by his worst nightmare. “Me paró la policía,” he texted my mother, “no sé que hacer.” (“The police pulled me over. I don’t know what to do.”)

My father, who has not had a valid driver’s license for quite some time, found himself being ticketed by a Florida state trooper. The officer took his expired license, told my father to not drive ever again, and wrote him a citation that doubled as a notice to appear in court. I don’t think I have seen my father more scared in my entire life.

I share these two accounts to try to convey how much my father has had to endure to get to this point in his life. The man has lived in the United States for the past 15 years, half of which he has spent as an undocumented immigrant, and yet, he remains committed to his work and to his family.

When I think about how tough I think I’ve had it, trying to navigate the higher education system in order to get a degree and a job, I often think back at all of the things my father has had to endure, and how much of it he has had to keep to himself—in hopes that his fears and worries would not become additional burdens for my brothers and me.

I recognize that I have had the privilege of having a father my whole life. A privilege that unfortunately not a lot of people have.

Earlier this week I was moved by the stories of two fathers who will not be spending Father’s Day with their kids. Brigido and Max are just two of countless stories of fathers who deported and consequently separated from their families. If my father’s worst fear is to be deported, mine is to have to face life knowing that he worked as hard as he could, and yet, he was taken from me—a consequence of a broken immigration system that continues to destroy families on a regular basis.

As we celebrate Father’s Day today, I want my dad, and undocumented parents everywhere, to know that there is a whole community standing behind them. We are working hard and diligently to ensure that you remain close to the ones you sacrificed so much for. 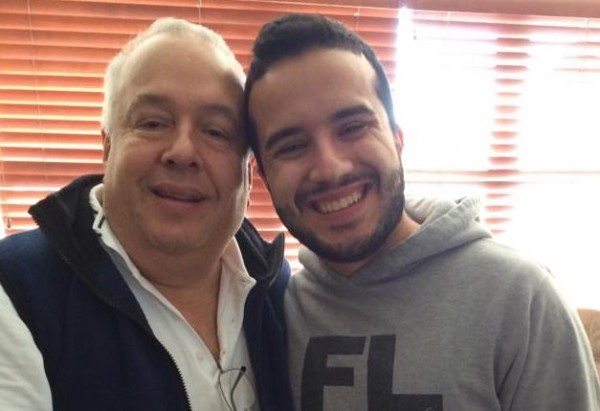 Dad, I know that I do not call you as much as I probably should. I know that I took the easy way out and wrote this English, instead of Spanish, and that you will probably need to have this letter translated to you. Despite both of these things, I just want you to know how proud I am of you.

At no point have you stopped trying, working or inventing new ways to keep our family afloat. Despite of where you find yourself today, you still manage to make the best out of any situation. My only hopes are that I am able to validate all of your efforts, so that the countless nights you have spent worrying about whether you made the right choice in coming to a country that has kept you in fear for so long are all worthwhile. That is one.

The other is to try apply everything you have taught me. To never give up, to always find a new way, to be kind, caring, and compassionate to others. To be strong.

I know things are still not “ok.” That once again you have to wait to be recognized as a contributing member of society. But I assure that I am working hard to make sure that the day comes when you no longer have to live in fear. That, I can promise you.

One response to “Happy Father’s Day to My Undocumented Dad”