Portraits of revolutionaries hang in our homes. Biographies of their lives fill our bookcases. Their public displays of courage against the injustices of the day inspire us to be eternally vigilant. But all too often our role models, especially of men for men, are largely divorced from family life in the popular imagination.

Think about it. Did Pancho Villa have children? Yes. But what do we know about the relationship they had with their father? Do they come as immediately to mind as his successful evasion of U.S. General John “Black Jack” Pershing or his daring raid on Columbus, New Mexico? Or, perhaps, even at all? What might our radical education be like if we spoke of exemplary figures in terms of embodying both a life of rebellion and deep, loving care for children, particularly their own?

For years, I’ve looked up to legendary Chilean folk singer Víctor Jara for what it means to be a complete human being. His weapon of choice was a guitar. He wasn’t a bandoleer wearing revolutionary or a gun-toting guerrilla in the mountains of Latin America. His politically uncompromising music aligned with socialist Salvador Allende right through the spectacled politician’s historic election to the presidency on September 4, 1970.

Despite the singer’s non-violent nature, Jara became a martyr nonetheless. Following the September 11, 1973 coup that overthrew Allende and imposed the dictatorship of Augusto Pinochet, the imprisoned singer-poet was murdered by a flurry of army bullets inside Chile Stadium. It’s one of many tragic chapters in the story of 20th century Latin America. 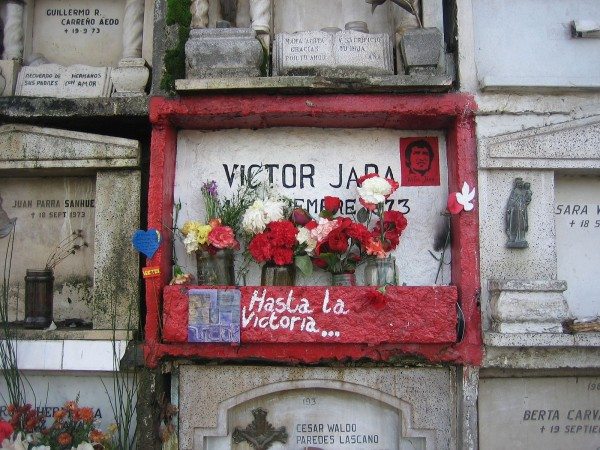 Without a doubt, Víctor Jara inspires me as a popular musician and martyr, but there’s still so much more to him. He was a theater director, an artist, a father, a stepfather, a loving, faithful husband and consummate family man. Jara’s compassion for children is laid out in his body of work.

As a son, Jara carried in him throughout his own brief life a difficult relationship to his father. Born in Lonquen to Manuel and Amanda Jara, Víctor recalls working the fields with a plow as a young boy with his father. Living in rural poverty, other memories in the home were unpleasant. Manuel Jara drank his problems away, disappeared from the home and reappeared to beat his wife. The trauma of domestic violence aired itself out later in the intimate lyrics of Víctor Jara’s “La luna es muy linda.”

The musician evolved out his volatile upbringing with a sincere tenderness for children. A number of songs that he sang, from “Canción de cuna para un niño vago” to “El niño yuntero,” a Miguel Hernández poem set to music, display a deeply human concern for their impoverished lot in life.

Best among his songs is “Luchín” with lyrics that speak of a young Chilean shantytown boy playing with a modest cloth ball. “If there are children like Luchín / Who eat dirt and worms / Let’s open wide their cages / So that they can fly like birds.” Beyond songs, some of the most popular images of Jara are of him surrounded by shantytown children as he played his guitar much to their innocent amazement.

Other well-known photos of Víctor Jara showed him, again, with guitar in hand surrounded by children, this time his two daughters, Manuela and Amanda. Jara fell deeply in love with Joan Turner, a British woman living in Chile. She had been married before to a Chilean choreographer, only to have it dissolve when his heart left hers for another. All of this happened when Joan was pregnant with their daughter Manuela.

Víctor Jara later took Manuela in as if she were his own. He married Joan Jara and they had a child, Amanda, together. Joan Jara’s book “Víctor: An Unfinished Song,” gives insight into their family life. “Víctor was a very good father. He learned to change nappies and powder a small bottom, was good at doing things that needed a firm and gentle touch, like cleaning wounds on children’s knees, extracting splinters or cutting babies’ toe-nails,” she wrote. And he loved Manuela and Amanda’s mother with firm fidelity.

How many revolutionaries do we look up to that display a sense of conviction and courage in the social matters of the day, but also create poetic narratives of children as being central to them? Better yet, Víctor Jara was a revolutionary Rad Dad and a hell of a one at that. His life was cut short by the horrors of fascism, but not before giving us more than enough to humbly attempt to model ourselves after.

Gabriel San Román is the author of “Venceremos:” Victor Jara and the New Chilean Song Movement, and a writer with the Orange County Weekly.