UPDATE, June 29,2015: NBCUniversal has terminated its relationship with Donald Trump.


This morning the National Hispanic Leadership Agenda (NHLA), a coalition of the country’s most prominent Latino organizations, released a statement applauding Univision for severing its business relationship with Republican presidential candidate Donald Trump after reaction to Trump’s comments about Mexicans reached a fever pitch in the U.S. Latino community. In addition, the NHLA is demanding that NBC Universal (owner of Telemundo) also end ties with Trump. With news that the NHLA has taken an active role in the Trump controversy, an online petition calling for NBC to stop working with Trump has begun to go viral. 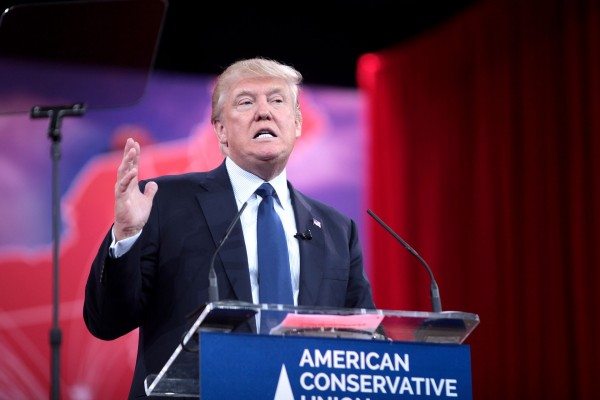 NHLA SUPPORTS UNIVISION DECISION TO CUT TIES WITH TRUMP, URGES NBCU TO DO THE SAME

Washington, D.C.—The National Hispanic Leadership Agenda (NHLA), a coalition of 39 of the nation’s preeminent Latino advocacy organizations, released the following statement applauding the entertainment division of Univision Communications for ending its business relationship with the Miss Universe Organization —which is partly owned by Donald Trump, a contender for the Republican Party’s presidential nomination— over his repugnant comments regarding Mexican immigrants and, by extension, Mexican-Americans. NHLA also calls on NBCUniversal (NBCU) to follow Univision’s lead and both withdraw from airing the Miss U.S.A. pageant and terminate its financial ties to Donald Trump.

“Aspirants to the highest office in the land must not use a national electoral platform to spew venomous speech about Mexican immigrants and Mexican-Americans,” said Hector Sanchez, Chair of NHLA and Executive Director of the Labor Council for Latin American Advancement. “As a Mexican immigrant to this country, I can personally attest to the falsity of Donald Trump’s statements.”

“Univision Communications’ courageous action to sever ties with both the Miss USA and Miss Universe Pageants–which are partly owned by Donald Trump—is civil rights leadership in the digital age,” said Felix Sanchez, Chairman and Co-founder, National Hispanic Foundation for the Arts. “We implore NBCU to follow Univision’s lead and take a similar stance and sever their financial relationship with Mr. Trump, in light of the bigoted way he has denigrated Mexicans and Mexican-Americans.”

“Trump’s arrogance has never been questioned, but his disgusting views on Latinos and Mexicans in particular will forever mark him as the arrogant bigot that he is,” said Alex Nogales, President and CEO, National Hispanic Media Coalition. “Our country deserves much more from its Presidential candidates.”

On June 16, 2015, Mr. Trump announced his candidacy for the Republican presidential nomination. During Trump’s announcement speech, he said:

“When Mexico sends its people, they’re not sending their best. They’re sending people that have lots of problems, and they’re bringing those problems with us. They’re bringing drugs. They’re bringing crime. They’re rapists.” Trump also proposed erecting a big “wall” along our Southern Border, to be paid for by Mexico.

The Miss USA Pageant is scheduled for a July 12, 2015, broadcast on NBCU from Baton Rouge River Center in Baton Rouge, Louisiana. Nia Sanchez of Nevada, the reigning Miss USA, will crown her successor at the end of the event. Ms. Sanchez, who is from California, is of Mexican descent.

Yesterday, PRI’s The World spoke with Felix Sánchez, head of the National Hispanic Foundation for the Arts, and one of the key drivers in making the NHLA statment a reality.

The NHLA statement comes a day after Trump wrote to Univision CEO and president Rudy Falco, telling Falco that Univision employees are now banned from his Miami golf course, which is located right next to Univision’s studios. When Trump shared news of the ban, Unvision issued the following directive to its employees: “As part of this decision, UCI employees should not stay at Trump properties while on company business or hold events/activities there.”

Trump’s Instagram had also posted a personal note from Univision anchor Jorge Ramos, who has asked Trump for an intereview. That image contained Ramos’ personal cell number (blocked out in red below). The image no longer exists on Trump’s Instagram account, although the Falco letter does: 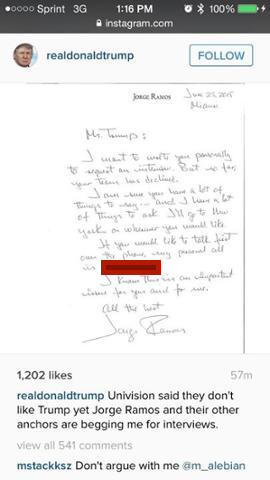 Trump has threatened Univision with a lawsuit for alleged breach of contract.