What It Will Take to End an Arizona Sheriff’s Reign

Maricopa County’s Sheriff Joe Arpaio is the personification of hate.

As a result, the man who made his career putting children in chain gangs and ritualizing acts of humiliation in the name of law and order may finally be seeing the end to his reign. But for Arizona to recover from its reputation as the most bigoted state in the country or for any sense of justice to be returned to Maricopa County, the institutions he built will have to be dismantled and sent packing along with him.

For his over 20 year rule as Maricopa County Sheriff, Arpaio has codified policies that abuse people in custody and terrorized neighborhoods with crime suppression sweeps.

The Department of Justice observed his racial profiling as the worst agents have ever witnessed in their careers.

In Arpaio’s early time in office, these attacks went largely unprotested. Our communities did not realize the dehumanization would become a pattern or grow into the vilification of brown people who paved the way for the national anti-immigrant attack we’ve witnessed. But that changed in 2007.

That year, Arpaio was granted an agreement with the federal government that deputized county law enforcement to act as immigration officials. Arpaio used it to deputize vigilantes and mount armed patrols of Latino and indigenous neighborhoods, a spectacle that paved the way for other forms of legalized racial profiling against immigrants, including the notorious SB1070 law, its copycat laws and current federal policies that have led to almost three million deportations under the Obama administration.

It was Arpaio’s neighborhood sweeps and anti-immigrant tactics that garnered national attention, gaining him GOP candidate visits and earning the state its reputation as the most hateful and racist state in the country. And it was his thinking that he was above the law that ultimately will be his downfall.

After decades of community organizing that led to lawsuits and piles of evidence, Arpaio has been found guilty of racial profiling and is now facing criminal and civil contempt charges for violating an order that he stop such practices. Survivors of his workplace raids filed a suit and won an injunction. As a result, Arpaio can no longer sweep up hundreds of workers for merely earning a paycheck to support their families. Ads plastered around the city and on official vehicles that called for vigilantes to profile and arrest anyone profiled as an immigrant have been removed. After years of fighting back, we have neutralized certain parts of his legacy, and have built the momentum that could lead to his imminent removal from office.

But Tent City still houses both sentenced people and many still awaiting trial even as daytime temperatures in Phoenix reach 115 degrees and above. He may have been stripped of his immigration agreements, but they’ve been replaced with actual federal deportation agents stationed alongside the Sheriff in the Maricopa County Jail. In fact, Arpaio announced that he sent 5,000 people to ICE in the last 18 months. And even if someone doesn’t end up separated from their loved ones, thousands of victims of his profiling now have criminal records that make them ineligible for relief. 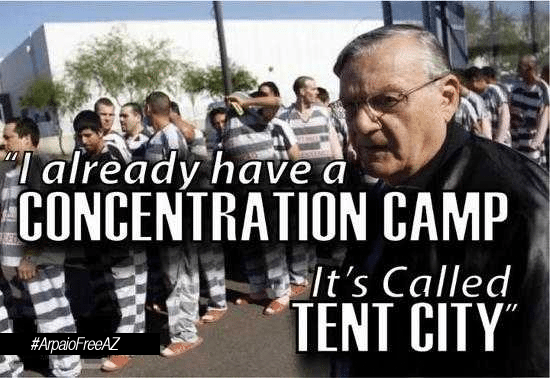 Arpaio has never attacked our community alone. His racism and violence moves the dial consistently to the right, but it is the federal government that takes advantage of that space by institutionalizing nationwide anti-immigrant policies that started in the laboratory that is Arizona.

For us to have an #ArpaioFreeAZ, it means much more than the removal of the head Sheriff. There is no separating Arizona from the national policies that earned President Obama the title Deporter-in-Chief. There is no space between Maricopa County and Eloy where a man just died under more than suspicious circumstances and victims of local and federal policy are brutalized in detention. With a federal detention bed quota of 34,000 a day, Arpaio’s work serves to meet the federal mandate of the continued criminalization and mass incarceration of migrants.

Since 2007, when we began organizing against Arpaio’s attacks on day laborers and his neighborhood sweeps rounding up hundreds, we have learned that in order to stop the assault on our community, we have to take on the enforcement-detention-deportation machine on every front possible. We can’t talk about deportation without talking about detention and we can’t talk about detention without talking about enforcement and criminalization. As we await a court decision potentially shielding millions from deportation, the momentum to shut down detention and get Arpaio out of his office grows.

The Sheriff may be the individual on trial, but we are fighting for an end to a whole system that has made racism its policies and terrorizing our communities its practice.

Carlos García is the director of Puente Arizona, which leads the #ArpaioFreeAZ campaign in Phoenix, AZ.