When I lived in Old San Juan —en la calle San Fransisco— there was an old man who walked the streets of that grande dame for hours with a bullhorn, waving a huge Puerto Rican flag. Like a town crier, he yelled again and again: “La colonia se va, se va. Se va la colonia.” It was more like a prayer than a mantra. Watching him from my balcony I thought: “Why won’t this fucker shut up? In my bloody dreams this will happen.”

Well, I might have underestimated the old fart. It looks like his prayer was more like a prediction. Reality is this: the Estado Libre Asociado (or ELA) turned 63 last month. It is agonizing. Like the Puerca de Juan Bobo, they don’t know what more to put on it to disguise the fact that…it’s a pig.

When Governor Luis Muñoz Marín proclaimed the Constitution of the Commonwealth of Puerto Rico (read ELA) on July 25,1952, Puerto Ricans welcomed this political Jabberwocky as the yellow brick road to a Boricua Oz. 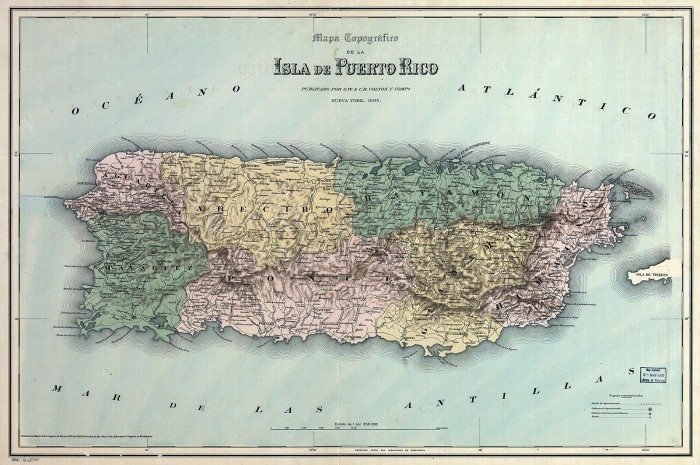 “Democracy makes nations as well as men equal in dignity,” Muñoz Marín said. And we believed him. No such thing as a colony, he said. The ELA is “un estado creador.” Sure thing.

Here he is explaining the unexplainable to a group of Puerto Ricans. Explaining an Estado Libre Asociado: qué no es estado, ni es asociado y menos libre. It more being the case of: what is this shit?

If you understand what in God’s name he is getting at, give me a call.

At the time, Pedro Albizo Campos, leading figure in the Puerto Rican independence movement, called Muñoz Marín out and described the ELA as “a political corporation created by the United States to wield imperial power in Puerto Rico.” Or in another explanation: “The United States was interested in the cage, not the birds.”

Vicente Geigel Polanco, a leading political figure when the ELA was born, called it “a farce.”

What we got served up was cognitive dissonance a la Boricua.

More than six decades later, Puerto Rico is far from the progressive island fabricated by Muñoz Marín. Broken by a colonial status that bred a corrupt, entitled and not very intelligent political class, $72 billion in unpayable debt, a soaring crime rate and a population decline not seen since the 50’s, it is now a false “showcase of the Caribbean.” Talk about getting the fuck out of Dodge.

The economic crisis has stripped away the veneer and revealed a decaying and defunct political system propped up like a Victorian Memento Mori. Or in Boricua terms: El Muerto Para’o—tethered to a wall. It does not take being Albert Einstein to now what insanity is. And what both political parties are doing is the pure definition of insanity: Doing the same thing over and over again and expecting different results.

Or as Puerto Rican economist Santos Negron Diaz recently wrote in Claridad: “We can not continue to pour new wine in old wineskins.”

Gov. Alejandro García Padilla, in his message commemorating the 63rd anniversary of Puerto Rico’s commonwealth, hung on hard to the ELA—stating it “needs to grow and reach a climax.”  I am of the mind that the time has come, the Walrus said, to don that wooden kimono.

Bad governance and poor public administration are the main culprits of Puerto Rico’s many crises. The current status is not ideal and it has led to some of these problems. I don’t think anyone can deny that. So, the time has come to change it. History has shown that sometimes a nation needs a painful fall on it’s behind to wake up, get up and finally do something about it.

The status quo is no longer sustainable and Puerto Rico needs to grow up and take control, even if that means more sacrifices. As our old folks often say: Se acabó el pan de piquito.