If you’re a true New Yorker, you’ve heard the phrase: “Fulano-De-Tal is from THAT block.”  Furthermore, if you’re from South Bronx growing up in the 80’s, more than likely, legendary photographer Ricky Flores has the images to prove it. Now, what if I told you a handful of those images are being turned into large-scale murals in several NYCHA South Bronx playgrounds? I know, thrilling,no isn’t it? And what if I verbally stimulate your climatic experience by revealing that the muralists are world renown Brazilian artists Ananda Nahú and Izolag Armeidah? Breath heavily and release. Instead of going for a smoke, enjoy Ananda’s article by CNN Style as one of “Seven creatives redefining Brazilian art and design.”

After going into the fanatic scream-dance, hyperventilating, convulsing and vociferating someone to help me off the floor,  I decided to go and check this out for myself. Choking up in the brutal New York heat, these wonderful couple engages in the incredibly physical work of spray-painting art on a 12 feet high by 12 feet long wall. While wearing a gas mask to avoid drawing a spray-painted mural into my lungs, I sat down with these gifted visual artists, who also happen to be a loving couple.

MF: Working in the streets of the Bronx, Rio de Janiero and other cities worldwide, what is the most common sociopolitical issue you’ve encountered?

ANANDA: I always find many people who were forced to leave their country of origin due to poverty, corruption and wars, to seek more stable places politically. This makes a lot of completely different cultures come together, mingle, and become a new cultural identity.

MF: Is art inherently political by it’s own nature or we make it a political issue?

ANANDA: Yes, we make it a political issue.

MF: Should there be a “museum of street art”?

ANANDA: Museum of street art doesn’t make sense because the streets are already a museum; many tags done, much history painted by hands and minds that already don’t exist anymore. When art is out in the streets, it immediately becomes an art gallery. You can try to reproduce same impact and aggressive style of what’s on streets, but in my opinion, what’s on streets belongs to the street. 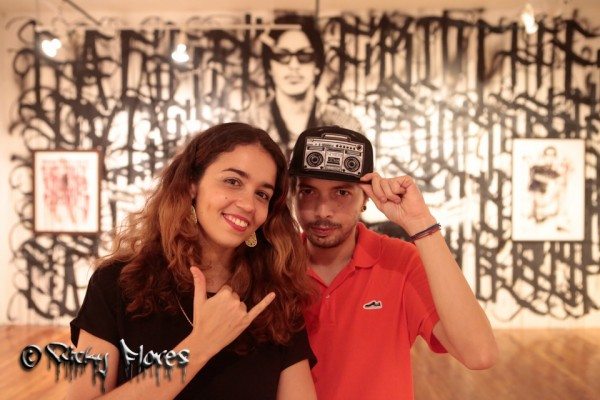 MF: What do you think is the unifying thread of all Latinos?

ANANDA: I believe that the union of Latinos comes from its history in common fought with struggle and perseverance in life. This constant fight against territorial and cultural domination makes people want to praise fiercely and proudly their own origins.

MF: What do you think Latino artists resist depicting in their works in fear of being rejected?

ANANDA: The artist has a duty to visually express the essence of contemporary art, as well portraying the entire voice of his/ her generation. S/he will never have a complete acceptance; there will always be those who will resist seeing.

MF: What was the moment you realized you wanted to become an artist and work to beautify the streets?

ANANDA: I always liked to draw and paint. It has always been something natural for me. When I decided to do School of Fine Arts and Graphic Design, I knew that I would develop something. Graffiti came into our lives naturally; we began to make paintings on the streets already in order to build a visual identity.

MF: All the murals you’ve been painting, are they considered graffiti? If not, what’s the difference?

ANANDA: Mural means many people involved in paint production; means sending drafts, waiting for approval, following a theme. There is no freedom in Mural, you must follow what was agreed and approved. Graffiti means not ask permission to paint, you buy your own spray cans, and you fund your painting, and paint what you want. It means freedom of expression and action.

MF: Is that what you’re encountering right now, a lot of “red tape”?

MF: Ok, moving on. What is “Faces from the Block” and how that project came to fruition?

ANANDA: Faces from the Block is an 8-year collaboration between South Bronx Puerto Rican photographer Ricky Flores, Izolag and Me. It was born by happenstance when Izolag and me found Flores’s work on Flickr, an online social media photo-sharing site around 2008. We quickly became fascinated with his work and began incorporating some of the images in a series of paintings representing cultures from around the world. It was during this period of time a collaborative process was developed with the goal of creating a joint exhibition and murals here on the streets of the South Bronx.

The collaboration is an explosive and loving interpretation of the residents of the South Bronx through the eyes of Izolag and mine. They depict friends and family from his youth, seen through the lens of time and distance based on the stories Izolag and I heard in Brazil about life in the South Bronx during the fire years of the 60s that ended in the wasteland of the 80’s. The body of photographs resonated with our own experiences of life in the streets of Bahia and Rio de Janeiro and they were inspired by the resiliency of the people of the South Bronx and their influence in art, music, dance and culture and the birth of the Hip Hop movement. The body of artwork that Izolag and I created from Flores’ photography range from line drawings, fine art paintings and large murals created with stencils and filled out with warm colors of the tropics and laced throughout with textile patterns influenced by cultures from Africa and the Orient. 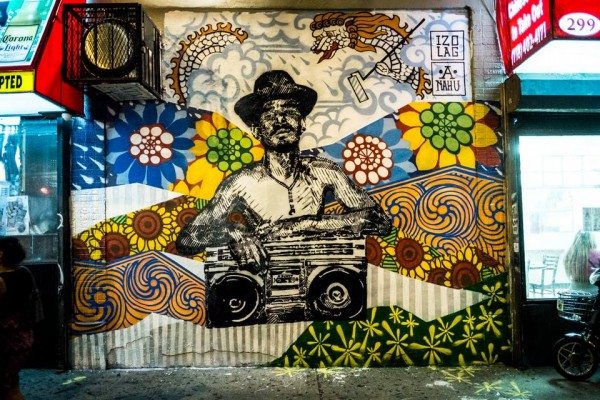 ANANDA: Know your roots to know how to fight.

MF: Thank you for sweating colors off your skin, beautifying our streets.

Ricky Flores started documenting life in the South Bronx after he purchased a camera with a small inheritance he received from his father in 1980. It started a journey of self-discovery born out of photographing the lives of his friends and family during one of the most turbulent times in the history of Bronx and New York City. Over the years Flores free-lanced for the Daily News, the New York Times, the City Sun and the Village Voice. Flores was recognized for his coverage of the attacks on World Trade Center on September 11, 2001 and is a two time winner of the New York Press Publishers Association for Spot News. He has a permanent installation at I.S. 206 in the Tremont section of the Bronx commissioned by the School Construction Authority New York City Board of Education and the New York City Department of Cultural Affairs.  He is currently a staff photographer for the Journal News in Westchester, New York. @Ricky_Flores

Izolag studied fine arts at the Federal University of Bahia, and there deepened his knowledge of graffiti, stencil, poster and the calligraphy art form. He took to the streets and made large stencils refining his techniques. He developed various styles of calligraphy, from the most classic to modern, creating his own style. He has become a pioneer in the stencil art form in Brazil and is known for creating large murals using this technique filling out the work with multiple layers of color. The images take on a life-like quality. He recently broke the world record when he created a stencil measuring 50 by 20 meters. A large portion of his work is based on children living in conditions of risk, living in shelters and on the streets. He has partnered with social activists and photographers from around the world to help these children and workers to build a better future. Izolag has sold hundreds of paintings across Europe, collectors include corporations, European prisons, and various galleries spread across the world. @Izolag

Ananda Nahú attended Faculty of Design and Fine Arts of the Federal University of Bahia. During this period, she studied photography, engraving, lithography, silkscreen, etching and used these techniques in creating posters. She developed techniques with stencils and created artwork influenced by elements of contemporary art and textile artwork from African and the Orient. This mixture of styles, colors, visual aspects, painting techniques and diversity of materials is a striking feature in Ananda’s work. The process of creation and execution of her paintings unites digital manipulation with the physical creation of the artwork, adding a modern process in producing a traditional handmade artwork. With this as a foundation you can see the integration of cultural references and the diversity of people, harmoniously working and interacting together in the same composition, which transmit messages of strength, beauty and the divine nature of the human being. All this is informed by Ananda’s own history and country where the diversity of nature and races is the main characteristic. @anandanahu

One response to “Faces From the Block: Brazilians Turn South Bronx Into Street Art Gallery”