This morning Ezra Klein, explainer-in-chief at the conspicuously lacking in diversity Vox, tweeted his site’s latest attempt to draw in Latino readers:

The difference between "Latino" and "Hispanic," in one comic: http://t.co/qyoLh8UzaC

One thing to note: Klein is of Brazilian descent (he also shouted the piece out on his Facebook, saying this: “This is fantastic, and I say that as someone who is Latino, but not Hispanic.”).

Still, some Latinos on social media immediately took notice. Jennifer Lubrani pointed out that the “cartoon isn’t even accurate,” as the comic refers to people from Spain being Hispanic (only people from Spanish-speaking countries in Latin America are) and includes all of the Caribbean in definition of Latin America (a move pushed for by some Latinos, but one that isn’t widely accepted).

Vox has been catching flak for its lack of diversity even before it launched early last year, and its founder Melissa Bell explained to researchers preparing for a International Business Times piece on the lack of diversity in the media that “Vox Media did not have its numbers available but were in the middle of conducting an internal study.”

While it should be pointed out that the artist Terry Blas is himself Latino, the lack of Latinos on Vox‘s staff and editorial board has led it blunder once again by publishing one of its trademark explanations, only this time it’s explaining an issue that, for Latinos, is well worn-out. This is 2015, Vox, not 2002. Talk about a stale topic. (If Vox really wants to raise it to another level, read this.) 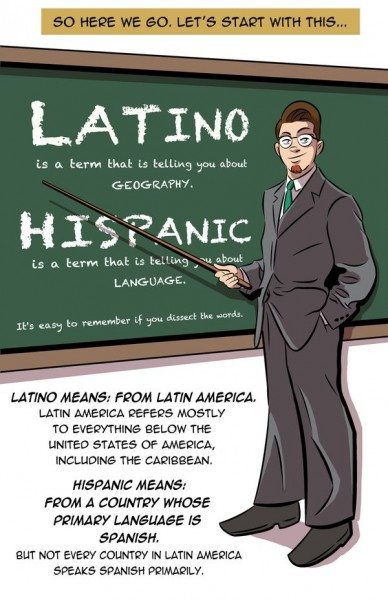 Because Vox bills itself as a flashier, journalistic version of Wikipedia, most visitors to the site readily swallow any description the site presents. The lack of Latinos on an editorial board causes a problem when the site attempts to reach Latinos by talking to Latinos about Latinos.

Sorry, Ezra, we know that you identify as Latino, but your outlet’s Latino news coverage has been shallow from the very beginning and so disconnected. The way you frame this latest comic as something factual doesn’t help either.

But what do you expect from an outlet that is quick to use West Side Story references when it comes to writing explanatory news pieces about Puerto Rico’s economic crisis?

Raise your game, Vox. Digital Latinos are so way ahead of you. For example, read this. It’s time you caught up to them.