We don’t think we have ever seen 52 seconds of actual crap dominate our social feeds so much, but such is the case of a new Carl’s Jr. “Borderball” ad for a Tex Mex Bacon Thickburger (of course). Suddenly, sex, the border and immigration are hawking fast food. Only in America.

Cue the spin and the “get over it” attitude. From Carl’s Jr.:

It is simply a fast food ad, and, like all of our ads, the premise helps to paint a picture about the food. If a connection was made between the ad and politics — it was certainly not our intent.

Please don’t insult our intelligence. You knew exactly what you were doing. Just admit it and move on. Even one of the models, Kara Del Toro, who shakes her culo for Team Mexico, said it:

I think it’s really sexy, and I think it’s playing up on what’s going on politically right now with immigration I love it.

As you might imagine, we are not alone on this one:

Our ad is "not political," "it helps paint a picture of the food." That's freaking hilarious, Carl's Jr.! Honestly! https://t.co/x9Pilv78PW

Just saw a Carl's Jr ad with girls playing volleyball over the Texas-Mexico border fence. I'm honestly not sure if it's wrong or just weird

Here are some of the comments from Carl Jr.’s Facebook page:

How long do we continue to support Carl’s Jr. in using pornography to sell their products? Their food is fine, but their advertising is absolutely inappropriate. I’m not OK with it. This is a “family friendly” restaurant marketing to adults and children.

I feel like Carl’s Jr and Hardee’s would rather sell their burgers with misogyny than an actual explanation of their food.

And take a moment to read the YouTube comments. Just one example: “Except real mexican women are 4ft9 300 pounds and look like indian chiefs.” Oh, Internet.

Of course, the ad has plenty of people who loved it. Woot! Burgers! Butts! Bikinis! Border wall!

What is doubly sad about all this, is that we are pretty sure that whoever came up with this commercial literally stole the idea from those who have tried to highlight border life a bit more authentically and for different reasons. Gee, where have we seen border volleyball before?

Then there is this photo from The Atlantic: 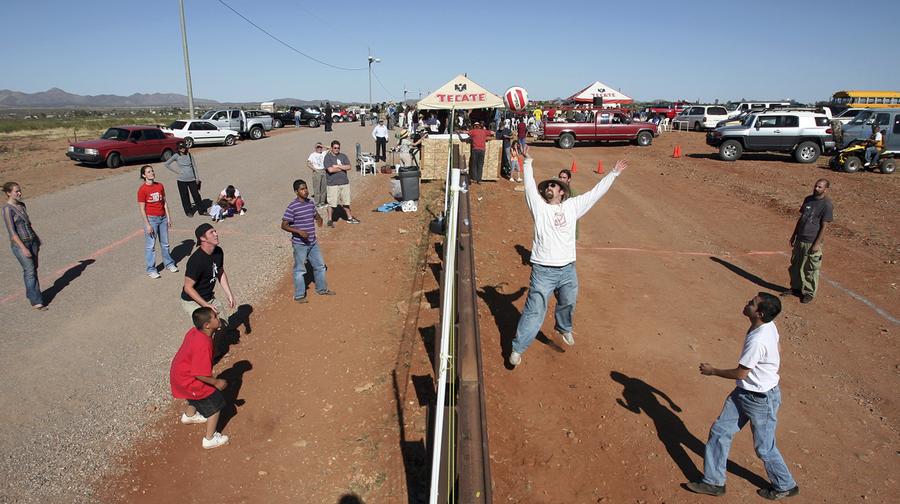 Residents of Naco, Arizona join residents of Naco, Mexico for a volleyball match during the fourth “Fiesta Bi-Nacional” at the fence that separates the U.S. (left) and Mexico (right), on April 14, 2007. (Reuters/Jeff Topping)

One response to “Carl’s Jr. ‘Borderball’ Ad Is So #NoMames, It’s Painful”