Vota! Is the App That Helps Get Out the Vote 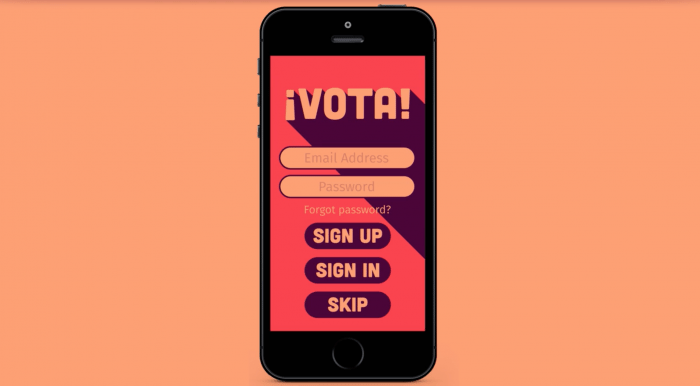 At over 55 million and growing, the Latino community has been dubbed the “sleeping giant” due its large population but still-unrealized political power. Though Latinos are widely credited for helping Barack Obama get elected in 2008 and then reelected in 2012, the Latino voter turnout rate was a mere 49 and 48 percent, respectively. During the 2010 and 2014 midterm elections, Latino voter turnout dropped to about 32 percent, clearing the way for major GOP gains in state governments and in both chambers of Congress.

As a graduate student interning for a Latino lobbying firm in D.C. last year, Rey Goicochea realized the ways in which the lack of Latino presence at the polls affect political discussions and policies.

“I met every Latino member of Congress,” Rey tells me during a recent phone conversation. “You could see firsthand the effects of low Latino voter turnout. They would say, ‘Oh, well this can’t happen because they won’t turn out to vote,’ or ‘This would be great if our people voted.’ ”

Attributing his political awakening to the outbreak of immigration protests back in 2006, it was during his D.C. internship that the Astoria, Oregon native and son of Mexican immigrants decided he would do something about low Latino voter turnout. He came up with the idea for an app that would allow users to research candidates and nudge friends and family members into registering and voting.

Such nudges are more effective than most may think according to Sasha Issenberg, whose 2012 book The Victory Lab was featured on an episode of CBC’s Under the Influence with Terry O’Reilly back in the summer:

That goes against a lot of conventional thinking in politics. In much of the election advertising I’ve been involved with, a big effort is expended to sway undecided voters.

But Issenberg states that the real key to winning an election is to mobilize your existing supporters. A large percentage of people are infrequent voters — meaning they support a candidate, but don’t make the effort to get to the voting booth on election day. …

Team Obama understood the importance of getting his supporters to the voting booths, and put up billboards that asked three questions:

The signs ended with the line: barackobama.com/make a plan.

And when voters clicked on that URL, the site helped them do just that. It’s estimated that Obama generated 10% more votes with that nudge.

Looking for someone to help him create the app, Rey reached out to someone whom he’d met during his undergraduate studies back in Oregon. Jose Alvarado had entered the master’s program for computer science at the University of San Francisco, and as soon as he heard the idea his former schoolmate had come up with, Jose agreed to build the app. Thus, Vota! was born.

Rey and Jose worked around the clock in order to make sure the app would be ready in time for the 2014 midterm elections, but the design and specifications kept getting rejected by Apple’s App Store. Apparently an app must meet a number of requirements before it can be accepted. The 2014 elections came and went, and Vota! sat on the shelf for a few months.

After a hiatus, and still unhappy with the way the app looked, in early 2015 Rey showed it to a digital artist by the name of Devin Polaski. Devin’s wife, a fellow student of Rey’s at the University of Michigan, had told her classmate that her husband was really into social justice and looking to apply his time and talents to worthwhile ventures. Devin punched up the design and has been the project’s chief creative officer ever since.

Vota! appeared in Apple’s App Store on July 6, and Rey says the app has received a postive response from the community, specifically civil rights organizations in Oregon.

In August Rey appeared on Univisión Portland to discuss the app.

Depending on how you feel about the current political milieu, it may surprise you to learn that Vota! is an app created with the outward goal of helping progressive candidates win more Latino votes. Candidates who would like to be featured on Vota! must submit a request with Rey, and so I ask him what would happen if a conservative wanted to be included on the app:

We’ve got a little bit of a backlash of people saying, ‘Why only Democrats? Why only progressives? Why not Republicans too?’ And I think the Republican Party has spoken, in terms of how they feel about the Latino community and the immigrant community by and large. So I don’t really have a problem cutting them out, because I feel people can educate themselves on the Democratic and progressive candidates on our app, and if they want to educate themselves on the conservative candidates, they can do that somewhere else.

At the moment Rey is looking for a bit more money to add a few features — an introductory video explaining how the app works, maybe a Spanish version. They’ve set up a GoFundMe page with the goal of raising $15,000. Jose’s brother is also working on an app for Android.

In the end Rey hopes Vota! can end the “fatalistic thinking” he witnessed among elected officials who weren’t willing to put in the effort to pass reforms that would directly benefit the Latino population, out of fear that said effort will go unrewarded by Latino voters. He blames low Latino voter turnout on apathy due to a lack of results out of Washington:

We’re not satisfied with the solutions from the political establishment right now. We’re not listened to a lot of the time, and we’re just pandered to. We haven’t seen any real movement on immigration reform. I personally felt abandoned when we didn’t have immigration in Barack Obama’s first term in office. We heard, ‘Come out and we’ll get immigration reform passed.’ Now, we know it’s not all his fault. But I know a lot of Latinos felt like there could’ve been a bigger push, or that there should’ve been more political capital [spent] to really get immigration reform through. So when 2012 came, and 2014, we weren’t motivated. We basically felt lied to.

Vota! is available on the App Store. For more information, you can also visit the Vota! website.

One response to “Vota! Is the App That Helps Get Out the Vote”