Along the Camino de Santiago, in the heart of the lovely walled city of Viana, is the Iglesia de Santa María de la Asunción. On the church premises, inside the gate but right before the entrance to the building, is a marble marker.

The uninformed pilgrim will walk over the plaque in a rush to view the church’s beautiful baroque interior, never suspecting that their feet are stepping on the tomb of one of the most notorious figures in European history.

The man buried there, who was born in September 1475, was power-hungry and ruthless. He was capable of bribery, deceit, murder and, if one is to believe the rumors that circulated in his lifetime, incest. He had a close relationship with Nicholo Machiavelli and provided the main source of inspiration for The Prince. He was named a cardinal in the Catholic Church at age 19. He was Pope Alexander VI’s main advisor, as well as his son. He resigned the cardinalcy at age 21 to become one of Europe’s most successful military commanders. His exploits, as well as those of his family, have inspired novels, films, and television series. What’s more, in a theory that scholars are increasingly embracing, when Pope Alexander VI decided that portraits of Jesus needed to make him look more Caucasian, as opposed to Semitic, his son, then considered the most handsome man in Italy, became the model for the image of the Nazarene we’re familiar with today.

The question then becomes, why is Cesare Borgia buried outside of a church in a small town along the Camino de Santiago? 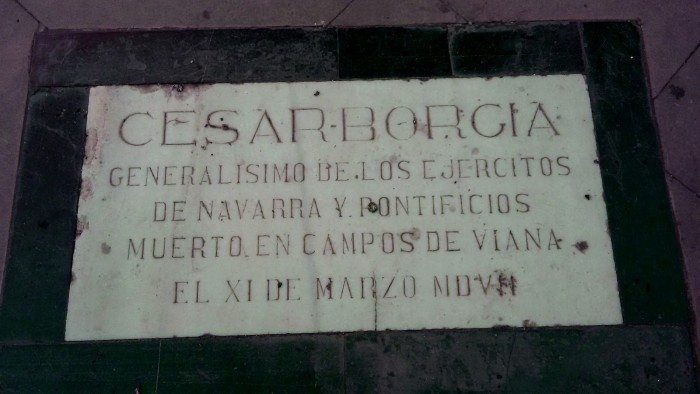 After his father’s death from malaria, Cesare’s fortunes fell on hard times. Although Machiavelli considered him a superb statesman, the former cardinal had trouble holding on to his considerable domains without papal patronage. What added to Cesare’s misfortunes was that the new pope, Giuliano Della Rovere, better known in history as Julius III, was the Borgias’ most deadly enemy.

With the new pope leading the conspiracy against him, Cesare was imprisoned, exiled to Spain — the country of his father’s origin — and the papacy took over his extensive land holdings.

Cesare managed to escape from prison, fled to Pamplona, and joined his brother-in-law King John III of Navarra, who was in desperate need of a military commander to fight off an expected Castilian invasion.

At once, Cesare set off to recapture Viana, then in the hands of a Navarran ally of Ferdinand II of Aragon. Cesare’s force of Basque soldiers captured the town without much resistance, but not the castle. He organized a siege, but when a mule convoy with provisions made it through during a severe storm, and then a party of knights escaped, Cesare became furious. He ordered his soldiers to pursue the knights, but since he was already mounted, he had a considerable headstart. When the knights realized that Cesare Borgia was on his own, they ambushed him, piercing his body 27 times with swords, lances and knives.

King John III buried his brother-in-law and military leader in Viana’s main church, behind the altar in an elaborate marble mausoleum.

But the story doesn’t end there.

The locals say that a bishop of Calahorra who hated the Borgias decided that such a “degenerate” was undeserving of a church tomb. He ordered the mausoleum dismantled and Cesare’s remains to be buried in the middle of the street where everyone could trample on him. 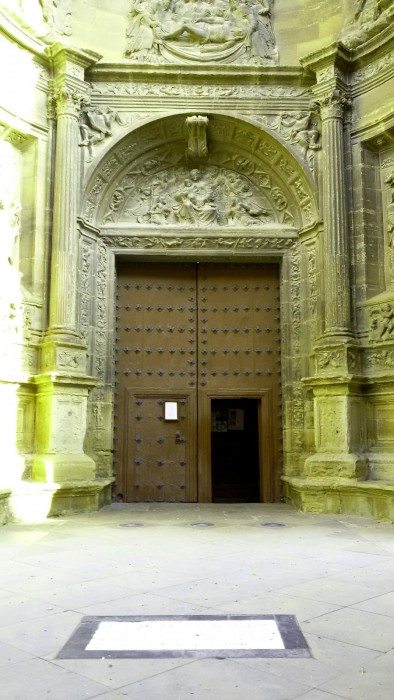 It wasn’t until 1953 that a group of historians succeeded in securing a more respectable site for Cesare’s remains. Although he was not allowed inside of the building, he now rests on hallowed grounds.

And so ends yet another of many stories one encounters along the Camino de Santiago.

One response to “Stepping on History”