KBOI 2 News in Boise, Idaho, reports on a local deli owner who had a few choice words for a Latino customer who gave the business a one-star rating on its Facebook page:

Jesse Lopez-Gonzalez, a Nampa resident, told KBOI 2News that all he wanted was to try a sandwich from a place he had never eaten at before, so he headed to Aj’s Gourmet Deli located off Garrity Boulevard in Nampa.

‘There’s a sign up,’ he said. ‘The guy was having a special so I went in to go check it out and see, you know, what he had.’

He ordered the first sandwich to-go, but Lopez-Gonzalez says he changed his mind after learning that the special was for dine-in customers only.

‘He puts it on the counter and I’m just like “hey, you know, I wanted… I wanted to eat it here,”‘ Lopez-Gonzalez said. ‘And then he’s like well it’s already in the box and then I’m just like OK. I told him “hey, you need to calm down, you don’t need to give me an attitude.”‘

Unhappy with the customer service Lopez-Gonzalez says he received, he decided to post a review on the deli’s Facebook page.

The rest, as they say, is history: 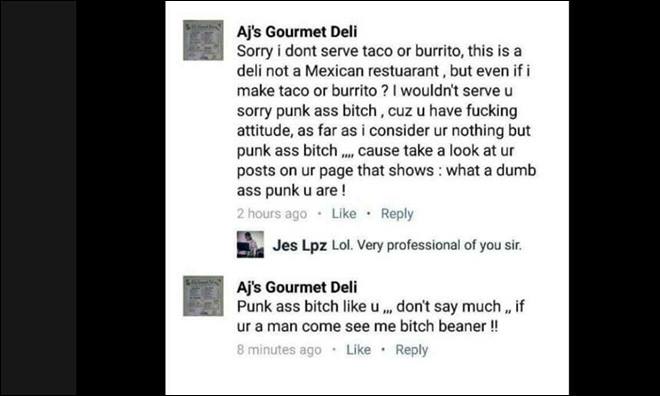 Since the reports, the deli’s Facebook page has quickly filled with one-star reviews accompanied by comments about the owner’s hateful remarks.

Eggie Nava writes, “Considering the population of this county is high in the latinos… you just alienated a HUGE portion of your business… good luck on your next endeavor.”

“With all the upheaval from their racist comments, I’m afraid that my family would be in danger if we chose to eat or go into their establishment. Making a conscious choice to select businesses with better business practices!” says Amy Riley.

Doug Price writes, “Obviously this owner has a racial issue, seems to think it’s not going to have any effect on the business. Guess what? It’s all over social media now…. Good job.”

“It’s unfortunate to find that one place I enjoyed eating at, turns out to be an Establishment with racists workers,” writes Kimber Lundy. “The food has been good, but not for me any more.”

Then there’s Patrick Trakel, who left a five-star review but says:

I’m going to do something that goes against the current trend by posting an actual review. I’ve eaten at AJ’s on numerous occasions. He has always been generous, gracious, and friendly to myself, my friends, and my family. The food has always been fresh, unique, and absolutely delicious. I loved this place, and my own real, personal experiences merit all five stars of this rating.

But it’s not enough. No matter how well AJ has treated me personally, no matter how good the food is, nothing excuses his recent behavior. Say what you will about how everyone has a bad day and says something they later regret, but I sure as hell don’t hurl racist garbage at people, no matter how pissed off I might be at them. Decent people don’t think that way, they don’t speak that way, and they certainly don’t type it up and post it for all to see. All of this is even more shocking to me given that AJ himself is a member of an even smaller minority group in this country. I guess it just goes to show that racism can and does exist all around us.

AJ, you’ve had ample time and opportunity to apologize or even just try to explain your actions, and all you’ve done is double down on them. Thanks for the good times and great food, but you blew it. I won’t be back.

A Facebook event has been created for Friday, October 23, from noon to 6 p.m. MDT at the deli, where customers are encouraged to order tacos and burritos.

So now that AJ’s Gourmet Deli will likely be shutting its doors, the only question is: what will open its place? We’re thinking a taquería.

One response to “Deli Owner Posts Anti-Latino Remark Against Customer”