Democracy Is Dead in Guatemala 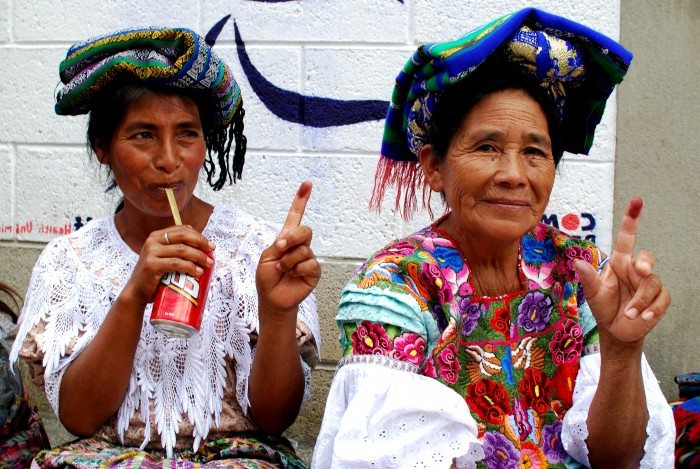 Only about half of the Guatemalan electorate showed up at the polls on Sunday to vote in the presidential runoff election between conservative comedian Jimmy Morales of the Frente de Convergencia Nacional and former First Lady Sandra Torres of the social-democratic Unidad Nacional de la Esperanza. Despite his ties to the jailed former President Otto Pérez Molina and other military officers responsible for massacres in the early eighties, Morales campaigned as an independent outsider à la Donald Trump — against abortion, same-sex marriage and the legalization of drugs. For her part Torres ran as the woman who, during the presidency of ex-husband Álvaro Colom, worked to better the lives of Guatemala’s women and children through social programs (not unlike another presidential candidate in the United States). In the end, the tsunami of anti-establishment sentiment created by a corruption scandal — which swept both the president and his vice president out of office this year — was enough to carry a seemingly political unknown like Morales into the Casa Crema. Torres conceded defeat after results showed Morales beating her by over 30 percent.

This is what democracy looks like? No. Not even close.

Guatemalans had been calling for the elections to be postponed so that reforms could be made to the electoral system. Elections have been dysfunctional for years, as donor anonymity allows candidates to run campaigns funded by drug-trafficking money and all kinds of corruption. Back in July the Comisión International contra la Impunidad en Guatemala, the UN-backed body which broke the corruption scandal that led to the downfall of both the president and vice president, released a report stating that one out of every four quetzales spent by a political campaign in Guatemala comes from drug cartels, and another half comes from government contractors.

The people of Guatemala more or less knew this, even if they didn’t know to what extent it was true, which is why they were calling for elections to be postponed till November. That was before President Pérez Molina stepped down on September 2, less than a week before the general elections. While it was celebrated as a victory at the time, many Guatemalans worried the resignation would amount to nothing if the political system remained undisturbed. Pérez Molina was a few months away from the end of his term already, and he was succeeded by Alejandro Maldonado who, as a conservative judge in Guatemala’s Corte de Constitucionalidad, annulled the genocide conviction of former President Efraín Ríos Montt in 2013.

As for the 35 percent of registered Guatemalan voters who actually went to the polls on Sunday and cast their ballots for the self-styled anti-status quo candidate Jimmy Morales, they may soon discover that they’ve just helped elect a second Ríos Montt or Pérez Molina presidency. Both former presidents are part of the same right-wing military cabal that founded Morales’s party back in 2008. Conciencia Guatemala went so far as to call Morales a “lifesaver” for the disgraced Pérez Molina and his Partido Patriota, to which the president-elect also has close ties.

It’s easy to throw up your hands and say that democracy has failed yet again in Guatemala, but true democracy has yet to arrive. The game was set up in such a way to give the illusion that a vote for Morales was a vote against Guatemala’s political establishment (just as U.S. voters supporting Trump claim to be fed up with the status quo). But the only thing the people of Guatemala have achieved in the past several weeks is to drive away a wolf and elect a coyote.

This man was just elected president of Guatemala. This is Jimmy Morales as "Black Pitaya." pic.twitter.com/ly1P5YZ0oO

2 responses to “Democracy Is Dead in Guatemala”