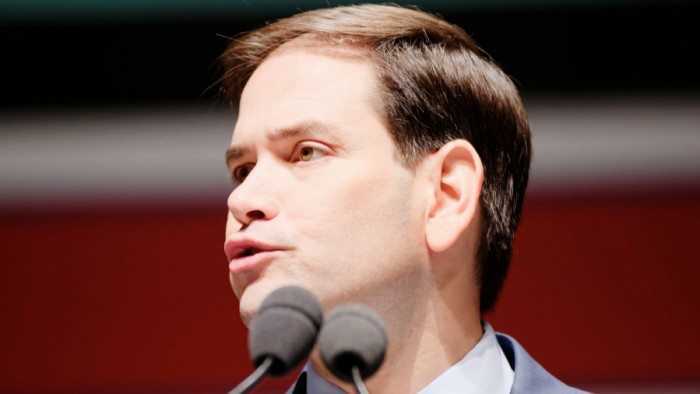 After a Syrian passport was found next to the body of one of the perpetrators of last week’s Paris attacks, 27 state governors announced that they will refuse to receive any of the 10,000 Syrian refugees granted asylum by the Obama administration. Former Florida governor and current Republican presidential candidate Jeb Bush appeared on CBS This Morning on Monday to say the United States should focus on taking in Christian Syrians only.

For their parts, Senators Ted Cruz of Texas and Marco Rubio of Florida — both running for president as well — argued that the United States can’t afford to take in Syrian refugees who might have a terrorist or two among their ranks. Cruz will introduce a bill that would put Jeb’s proposal into action, barring Syrian Muslims from entering the country but opening America’s door to Christians.

Rubio doesn’t believe the United States should accept any of the refugees fleeing civil war and religious persecution in Syrian, saying in an ABC interview, “It’s not that we don’t want to. It’s that we can’t.”

While U.S. leaders are debating whether America can afford to provide sanctuary to Syrian refuges, reports are surfacing of the over 28,000 Cubans migrants who have crossed the Texas-Mexico border in the fiscal year ending September 30. When Costa Rica granted travel visas to the 1200 Cubans who had made it there — after flying to Ecuador, crossing into Colombia, sailing to Panama, and then crossing into Costa Rica — Nicaraguan security forces shot tear gas into crowds of Cuban migrants trying to cross its southern border on their way through Central America and to the United States.

Strangely enough, Nicaragua, as a communist country, is actually close allies with Cuba, and we have yet to see how the Cuban government will respond to such mistreatment against its former citizens. (It may be that Havana thinks nothing of it, since any Cuban who leaves the island is traditionally viewed as a traitor to the revolution.)

Of course, Senators Cruz and Rubio are Cuban Americans themselves, and are constantly crowing about being the sons of Cuban refugees who fled persecution in Communist Cuba (although Rubio’s grandfather actually fled Batista’s Cuba and returned weeks after Fidel took power, only to flee his homeland again a few years later). Both Republican senators wax on and on about how the United States opened her arms to their forebears and embraced them as new Americans.

But now that millions of Syrians are fleeing conflicts largely ignited by Republican warmongering, these two sons of refugees feel the United States can ill afford to embrace asylum seekers from other countries. In fact, they didn’t believe the country should have taken in the desperate mothers and children who flooded across the U.S.-Mexico border in the summer of 2014; their suggestion then was to round up “the huddled masses yearning to breathe free” and ship them back to whatever hellhole they escaped from.

The influx of Cuban migrants is due the United States’ longstanding practice of granting Cuban immigrants on U.S. soil a fast track to permanent residency — a policy known as “Wet Foot, Dry Foot,” since any seagoing Cuban who steps foot on a South Florida beach receives the same treatment. The announcement last December that the United States and Cuba would resume diplomatic relations has many Cubans convinced that the decades-old policy is in its final days, and many are hoping to take advantage of their special immigration status before it’s too late.

To recap: The United States is struggling to find a place for the 10,000 Syrian refugees it has agreed to take in. Meanwhile, nearly three times as many Cubans have been taken in during the past 12 months.

Senators Cruz and Rubio don’t seem to have anything to say about that contradiction. I wouldn’t have expected them to either. They have no real principles, after all, only believing in whatever’s good for people like them.

Still, hypocrisy being a notoriously American characteristic, Ted and Marco can rest easy knowing they may be the most American men in the country.

One response to “Marco Rubio and Ted Cruz Are Hypocrites”