Bernie Sanders Voted Against Immigration Reform in 2007 (and Was Right) 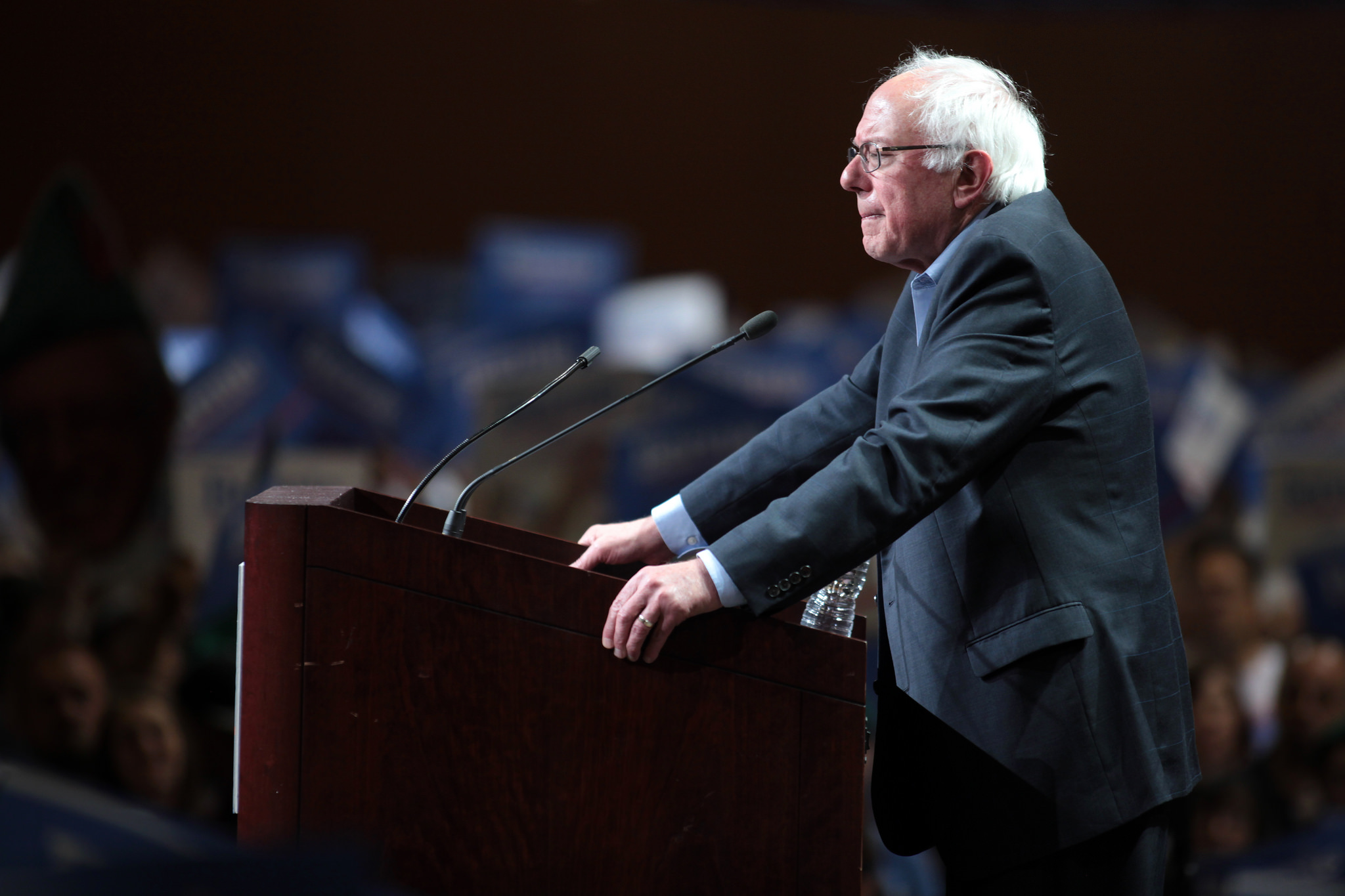 “I’m a strong supporter of immigration reform,” Hillary Clinton stated during last Thursday’s debate in Milwaukee. “And I have been ever since I was in the Senate. I was one of the original sponsors of the DREAM Act. I voted for comprehensive immigration reform in 2007; Senator Sanders voted against it at that time.” This is where my partner Rocio looks over at me from the opposite end of the couch. “Is that true?” she says, her voice tinged with a sense of betrayal and disappointment. How could Bernie Sanders, the people’s candidate, have voted against an effort to end one of the United States’ major injustices?

Hoping to maintain her lead in the polls among Latino voters, Clinton is trying to present herself as a more consistent advocate of immigration reform than Bernie Sanders, and in this her most effective attack is pointing out that Sanders voted against a bipartisan comprehensive immigration bill in 2007. The Secure Borders, Economic Opportunity and Immigration Reform Act of 2007, introduced by Senate majority leader Harry Reid on the heels of the Democrats’ retaking control of both the Senate and the House of Representatives, was largely a compromise between earlier legislation proposed by Senators Ted Kennedy, John McCain, Jon Kyl and John Cornyn. It was also a last ditch effort by George W. Bush and the Republicans to stem the flow of immigration, while eliminating issue from the Democratic Party’s platform. Containing all of the DREAM Act, which would’ve provided a pathway to citizenship for undocumented immigrants brought to the country as minors who graduated from high school and met other requirements, the 2007 bill also included provisions for increased border security, a guest worker program, and restrictions on future immigration.

The bill called for 20,000 more Border Patrol agents and 370 miles of additional fencing along the U.S.-Mexico border. It removed four of the five family-based categories under which an immigrant could apply for permanent residency, keeping only the preference for spouses and children of U.S. citizens. The guest worker program would’ve allowed 200,000 Latin Americans to work in the United States for two years, after which they would have to return to their home countries for a full year before they could reapply for temporary work.

Bernie Sanders supported the DREAM Act part of the bill, but opposed the guest worker bit and the downgrading of family reunification. So did one of the United States’ most venerated Latino civil rights organization, the League of United Latin American Citizens, and the country’s largest trade union, the American Federation of Labor and Congress of Industrial Organizations. In May 2007, a few weeks before the Senate’s vote, LULAC’s executive director said the group “cannot support a bill that will separate families and lead to the exploitation of immigrant workers while resulting in widespread undocumented immigration in the future.” For its part, the AFL-CIO described the exploitative nature of the guest worker provision to “modern-day Bracero Programs,” referring to the program launched during the Second World War to meet labor demands in the United States — and which lead to the forced deportation of millions of Mexicans, including a few U.S. citizens, from the United States under Operation Wetback beginning in 1954. The American Immigration Lawyers Association called the bill “unworkable,” explaining that “political considerations eventually warped the proposal in ways that would bring more chaos to our immigration system instead of the order and rationality that this bill was intended to restore.”

In June 2007 a junior senator from Illinois by the name of Barack Obama (who had already announced his presidential bid), proposed an amendment that would’ve eliminated the new merit-based system after five years. The new system was meant mostly to replace the current family-based system that awards points to green card applicants with family ties in the United States. The Senate quickly voted down Obama’s amendment. But then Byron Dorgan, a Democratic senator from North Dakota, introduced an amendment that would’ve ended the guest worker program after five years. Frank Sharry, a pro-immigration lobbyist, described the Dorgan amendment as vengeance for a successful amendment backed by Republican Senator John Cornyn of Texas which would’ve stripped confidentiality from applications for citizenship, leaving denied applicants vulnerable to deportation. The Senate adopted Dorgan’s amendment, with Obama, Sanders and Clinton voting in favor of one of the several “poison pills” that the bill’s supporters blame for its ultimate demise.

Unlike former Senators Obama and Clinton, Senator Sanders voted against a subsequent cloture motion, which would’ve ended debate on the bill and initiated an actual vote on it. Even if the Senate had passed the bill with Dorgan’s amendment intact, there were still major problems with the bill. Hundreds of thousands of guest workers would’ve been at the mercy of U.S. employers, who would’ve been encouraged to mistreat their workers by the understanding that none would complain for fear of being sent back to Mexico, Honduras or wherever. Then, after two years these workers would’ve been expected to return to their home countries, voluntarily relinquishing whatever job opportunities and physical safety they’ve enjoyed in the United States to face a region still ravaged by poverty and bloodshed. Of course, few would’ve abided by the new rules, instead trying their luck by slipping into the shadows and finding work wherever they could, creating a new class of undocumented and exploited workers to replace those given legal status by the bill.

Had the 2007 bill passed, the United States’ immigration crisis could’ve been worse today than it already is. There would’ve still been millions of undocumented people, only with less paths to legal status. Had the bill passed with Dorgan’s amendment removed, each year would’ve seen hundreds of thousands of temporary workers brought to the United States to fill labor-intensive jobs at extremely low wages, fueling widespread exploitation on the one hand and massive unemployment on the other. And having passed a reform bill in 2007, Republicans would’ve been less eager to take on the issue again so soon — especially with the GOP now controlling both chambers of Congress and an unpopular Democrat (at least among Republicans) in the White House.

Perhaps wanting to play the part of a good U.S. socialist, however, Sanders’s constant line about immigration is that the undocumented drive down wages in the United States, hurting U.S. workers. The argument is the same one echoed by those on the far right, and seemingly places the blame on undocumented workers and not on the U.S. employers who hire them, which I’m sure isn’t Bernie’s intention. What he should say is that current U.S. immigration policy is bad not only for U.S. workers, but for all workers, no matter which side for the border they’re from. A job promising only long hours and a low wage is hardly any better for the father of two from Durango than for the recent college graduate in Illinois. Just because workers from Mexico or Central America are more willing to endure workplace exploitation than their citizen counterparts doesn’t make the exploitation any more justifiable. What isn’t good for some workers isn’t good for all workers.

And just because an undocumented immigrant doesn’t have legal permission to be in the United States doesn’t mean U.S. employers can then exploit him or her. In order to ensure there aren’t second-class workers being taken exploited — driving down wages and making entire industries out of reach for U.S. workers — immigrants of any status should be on equal footing with U.S. citizens with regard to workers’ rights. Employers should be more afraid of breaking labor laws or violating workers’ rights than the undocumented are of losing their jobs for expressing dissatisfaction over workplace conditions. Only then would the floor on wages and work standards rise high enough to make some jobs more realistic for U.S. workers. For now, entire industries are dominated by undocumented workers, with the employers in those industries relying on a battered and malleable workforce.

Hillary can bash Bernie for voting against the 2007 immigration bill — a bill that would’ve separated families, left immigrants vulnerable to deportation, and created a new class of exploited workers — if she wants. I would’ve voted against it, too. Despite how wrong it seems on the surface, Bernie did the right thing. He must’ve had his doubts at the time. He must’ve wondered if he was on the right side of justice, or if he’d just buried his long progressive record in politics. Still, that Bernie’s capable of taking an unpopular position for the right reasons says more about him than Hillary would like you to know.