EDITOR’S NOTE: A previous version of this op-ed was published in The Hill. The author has given us permission to republish his piece. 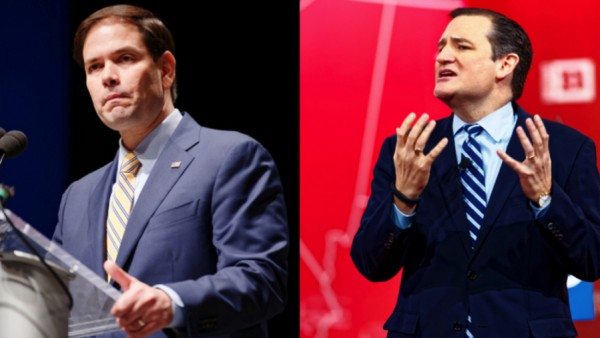 Growing up on the mean streets of East Los Angeles, I, like many of my childhood friends, feared the police more than the local gang, Big Hazard. Specifically, we dreaded Latino police officers, since they had a reputation of being more brutal than their white peers with us—poor Chicano kids from the projects. By verbally and physically harassing us, the Latino officers reinforced their 100 percent loyalty to their white peers and police department. Similarly, just like in my old barrio, in the Republican presidential nomination battle, we can clearly see how the two Latino candidates, Senators  Marco Rubio (Florida) and Ted Cruz (Texas), go the extra mile to demonstrate their loyalty to their white peers and mostly white electorate with their anti-Latino immigrant agenda.

Instead of glowing in an important historical moment, where two Latino leaders represent viable candidates for the highest office in the United States, Rubio and Cruz have engaged in a vitriol debate over their disdain towards undocumented immigrants—the vast majority being Latino. The ongoing duel between the senators regarding who supports amnesty or a pathway to citizenship for undocumented immigrants, as if it’s a sin to do so, represents a low point for both campaigns. Speaking of low points, during one Republican debate, the senators tussled over the Spanish language. When Cruz questioned Rubio’s conservative credentials for supporting President Obama’s immigration executive orders in Spanish on Univision, Rubio, as usual, refused to acknowledge any sympathies for those who live and work in the shadows.

Apart from demonstrating their anti-Latino immigrant credentials, it’s difficult to differentiate the two Latino Republican candidates with real estate mogul Donald Trump and his racist positions on immigration. This includes the mass deportation of Mexican immigrants (like in the case of the “Operation Wetback” of the mid-1950s) to the construction of a huge wall (that Mexico will miraculously pay for) to the ban of all Muslims to this country. While candidates like John Kasich and former candidates like Jeb Bush have expressed their discontent with Trump’s xenophobic language and tone against immigrants, the only Latino candidates don’t seem perturbed at all.

Given their anti-Latino immigrant agendas and lack of sympathy for the plight of immigrants, if either Rubio or Cruz manage to become the Republican nominee, how will the winner regain the trust and confidence of Latinos, as the largest ethnic minority in the country? Given that Latinos represent over 55 million residents in the U.S. with a growing voting population, when the Republican and Democrat nominees compete for the White House, Latinos will remember their friends and foes. National polls show are already confirming that.

This is the hard lesson that 2012 Republican presidential candidate Mitt Romney learned with his “self-deportation” position towards undocumented immigrants. By taking such an extreme position against immigrants, Latinos voted by a 3 to 1 margin for Barack Obama. Apparently, Romney didn’t learn from the disastrous case of California Governor Pete Wilson (R) in the 1990s, when Wilson supported Proposition 187—a draconian measure against undocumented immigrants. Not only did Wilson galvanize the Latino vote, he also ensured the demise of the Republican Party at a statewide level.

In addition to Latino voters, Asian Americans, as the nation’s fastest-growing ethnic group, also find immigration to be important issue. Like Latinos, Asian Americans voted by a 3 to 1 margin for Obama in 2012. Once you add African Americans (a loyal Democratic voting bloc) Democrats will secure the majority of ethnic minorities in this country, making it impossible for either a Rubio or Cruz Republican nominee to prevail in 2016.

In the words of the last California Republican governor and Hollywood action hero, Arnold Schwarzenegger, I have four words —three of them in Spanish— for the presidential campaigns of Rubio and Cruz: Hasta la vista, baby!

One response to “Latino Republicans as Anti-Latino Candidates: The Shameful Case of Ted Cruz and Marco Rubio”