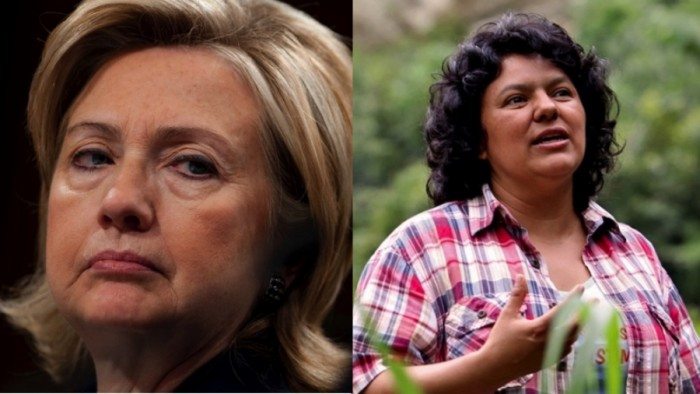 On the left, former State Sec. Hillary Clinton, and on the right, Berta Cáceres, an environmental activist killed on March 2, 2016

On Sunday, Greg Grandin, a professor of history at New York University and one of the foremost specialists on U.S.-Latin America relations, appeared on Democracy Now! to discuss the death of Berta Cáceres, the Lenca environmental activist assassinated in Honduras earlier this month.

Scores of gay-rights activists have been killed. I mean, it’s just a nightmare in Honduras. I mean, there’s ways in which the coup regime basically threw up Honduras to transnational pillage. And Berta Cáceres, in that interview, says what was installed after the coup was something like a permanent counterinsurgency on behalf of transnational capital. And that wouldn’t have been possible if it were not for Hillary Clinton’s normalization of that election, or legitimacy.

In the months following the military coup in 2009, most of the hemisphere — indeed, most of the world — was calling for the reinstatement of Manuel Zelaya, the democratically elected president detained by soldiers at dawn on June 28, and flown from a U.S. military base to Costa Rica. (He’d been removed by the country’s elite for increasing the minimum wage, convening a court to adjudicate the land claims of poor campesinos and the indigenous stripped of their properties by powerful companies, and proposing a number of other progressive reforms.) A resolution introduced in the Organization of American States calling for the “immediate, secure and unconditional” return of President Zelaya garnered overwhelming support by the membership, though then Secretary Clinton promptly blocked the proposal.

Clinton shrewdly refused to label the situation a military coup, knowing full well that such a determination would freeze all U.S. military aid under the Leahy Law. Hillary’s silence allowed golpista security forces to go after LGBT, indigenous, campesino and other opposition groups, resulting in countless human rights violations, injuries, and deaths. Meanwhile, she reached out to an old friend, Lanny Davis, the lawyer who’d defended husband Bill during his impeachment and who was at the time representing Honduras’s business leaders. Instead of meeting with Zelaya, Clinton sent an email looking to see if Davis could put her in contact with Roberto Micheletti, one of the principal golpistas and the de facto president of Honduras following Zelaya’s ouster. “We strategized on a plan to restore order in Honduras and ensure that free and fair elections could be held quickly and legitimately, which would render the question of Zelaya moot,” Hillary infamously admitted in her 2014 memoir, Hard Choices.

Last week, when asked about the 2009 coup and the post-coup consequences, the Clinton campaign called such allegations “simply nonsense.”

Suffice it to say the coup regime remains in power to this day, and Hondurans continue to live under a narco-capitalist government that denies basic rights while granting vast concessions to multinational corporations, especially in the biofuel industry. By stopping attempts to restore the Zelaya presidency and supporting neoliberal policies, the only issue Clinton left “moot” in Honduras was democracy.

Hector Luis Alamo is a Chicago-based writer and journalist. You can connect with him @HectorLuisAlamo.