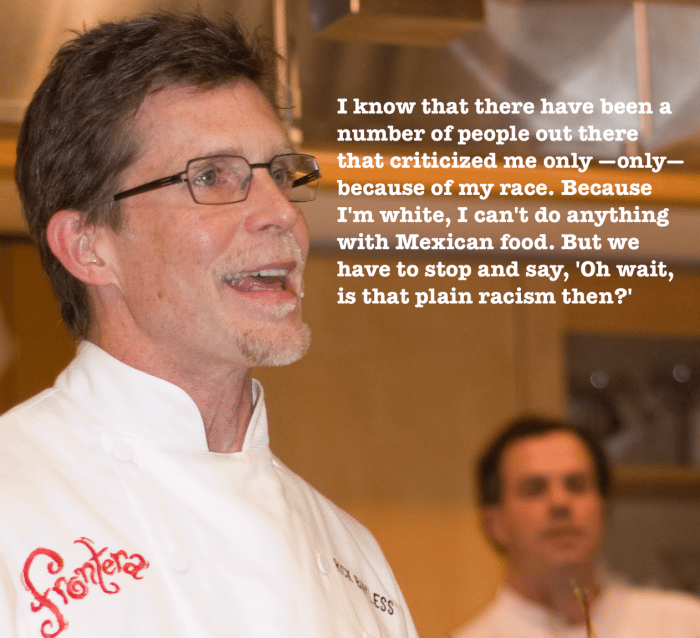 So earlier today, we came across an NPR piece called “When Chefs Become Famous Cooking Other Cultures’ Food.” The crux of the piece needs no explanation:

For some non-white Americans, the idea of eating “ethnic cuisine” (and there’s a whole other debate about that term) not cooked by someone of that ethnicity can feel like a form of cultural theft. Where does inspiration end? When is riffing off someone’s cuisine an homage, and when does it feel like a form of co-opting? And then there’s the question of money: If you’re financially benefiting from selling the cuisine of others, is that always wrong?

Not surprisingly, one of the bigger culprits mentioned in the piece was Rick Bayless, the guy who has made his mark with Mexican cuisine. Bayless has a history of critics (just read what our friend Gustavo Arellano has written in the past) and apparently, Bayless is crying racism. The NPR piece quoted an interview Bayless gave to WYNC’s The Sporkful, hosted by Dan Pashman:

Pashman: “There are also other Mexicans and Mexican-Americans who are like, ‘Screw this guy Rick Bayless.’ So how do you feel when you get that kind of reaction to your work?”

Bayless: “Well, usually people who have that opinion of me don’t want to have a conversation. Those people that say it are usually very political, and they have a mouthpiece and they just go around saying it. And everybody thinks, ‘Oh, lots of people must believe that.’ And honestly, I don’t think they do. I know that there have been a number of people out there that criticized me only — only — because of my race. Because I’m white, I can’t do anything with Mexican food. But we have to stop and say, ‘Oh wait, is that plain racism then?’ “

We don’t know if Bayless can roll up so much entitlement and privilege in one quote, but looks like he did it. But just case you some explanation from us, here is what one Latina Rebel told us today in the office: “Talk about white fragility and entitlement all at the same time.” Then there’s this quote from a Latino Rebel: “I mean, he doesn’t understand that racism comes with power—which he has to travel and do research.”

Our final response to this whole “plain racism” claim by Bayless? Hit it, Aamer Rahman: