Why the ‘Build the Wall’ Mural at the University of Minnesota Is Shameful, Insulting and Racist

In case you missed what happened at the University of Minnesota this past weekend, the following local report explains:

That “Build the Wall” mural, painted by the university’s College Republicans club on September 30, has lead to protests, from a call to “Build Bridges Not Walls” to having the words “Stop White Supremacy” spray painted over the mural: 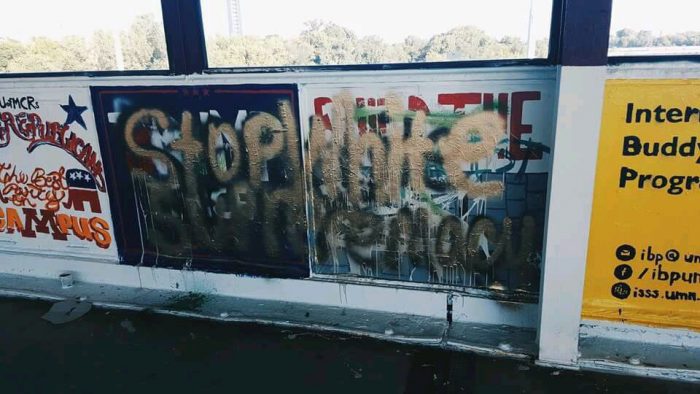 The “White Supremacy” tag led to this statement from the College Republicans:

It also led to a statement from University of Minnesota president Eric W. Kaler:

During the annual “Paint the Bridge” event, an opportunity for registered student groups and University departments to promote their groups by painting a panel on the Washington Avenue Bridge, one panel assigned to a student group has received attention. The panel includes the phrase from Donald Trump’s presidential campaign, “Build the wall.” While this is protected as free, political speech, we have heard from members of our community who find the phrase hurtful, offensive, anti-immigrant, and anti-Latinx.

People in our community may disagree with the sentiment expressed. However, while the University values free speech, the subsequent vandalism of the panel is not the way to advance a conversation.

The University of Minnesota supports a campus climate that welcomes all members of our community and our values of equity and diversity, but that also ensures the free flow of ideas, even those that are offensive to some. As students and our community participate in responses to this and future issues, I urge all of us to be respectful and thoughtful in our approach. We encourage all who find some protected speech distasteful or offensive to engage in more protected speech.

As you might imagine, this led to responses against Kaler. Here is what Navigate MN (one of the first groups to call attention to the “Build the Wall” mural said:

We tend to agree with Navigate MN on this one. This is not just about “offense.” The phrase “Build the Wall” has become code word for racism and xenophobia against Mexicans, Latin Americans and U.S. Latinos, ever since Trump framed his entire campaign on the fear of rapists and criminals streaming into the United States. For a bunch of college Republicans to suggest that there is nothing wrong with that phrase flies in the face of reality. That phrase has led to more hate and more violence against Latinos.

Furthermore, we do wonder if these college Republicans would have the same courage to paint murals that espouse anti-Semitism or say that Blacks should go back to Africa—two other beliefs from fellow Trump supporters.

We sincerely doubt it, but when it comes to Mexicans and Latinos, we should just stay quiet and not speak out?

What these Republicans students did was racist, no matter how they try to defend themselves now and hide behind the white supremacy that is now protecting them.

One response to “Why the ‘Build the Wall’ Mural at the University of Minnesota Is Shameful, Insulting and Racist”