AQUARIUS: A Tale of Two Brazils Bordered by the Ocean (INTERVIEW) 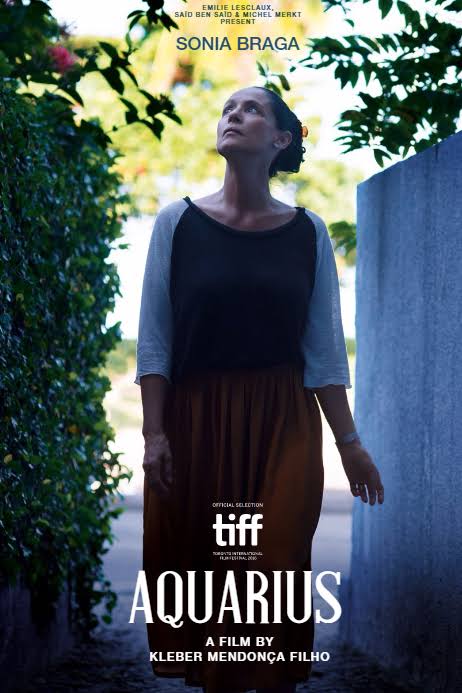 In an already tense worldwide political environment, daring artists use their chosen medium to illustrate the struggles we’re experiencing. Some have released songs in solidarity, while others have created naked statues of presidential candidates and settled them in public parks. Whatever the case may be, controversial protest pieces have been popping up everywhere, repudiating the status quo and rejecting the establishment’s belittlement of the disenfranchised.

Brazil is no exception. Between Dilma Rousseff’s impeachment due to corruption and the controversy surrounding the 2016 Olympics, Brazil has been the epicenter of political headlines. And in the artistic universe, the film “Aquarius“ proved too much for Brazil to handle. After winning prizes at several film festivals including Amsterdam and Sydney, “Aquarius” was seen as the one film to beat at the Oscars. But the Brazilian government’s Oscar committee rejected the nation’s candidate for Best Foreign Language Film, blurring the line between art and politics. Was it political retaliation? The film does explore the class and racial divide, unleashing a clash between leftists and conservatives commentators.

The film dovetails with the simmering anger in Brazil over the construction giants at the center of the graft scandals engulfing the political establishment. But Bruno Barreto, the director who presided over the Oscar committee, said the panel was not under pressure from Mr. Temer’s government to vote against “Aquarius.”

“Aquarius” is a drama exploring modern Brazilian life, written and directed by Kleber Mendonça Filho (Neighboring Sounds). Legendary actress, Sônia Braga, (“Kiss of the Spider Woman“, “Sex and the City“) plays Clara, a 65-year-old marijuana-smoking grandmother widow and retired music critic who is the last resident of the Aquarius, one of the few buildings of its age and character that remains in a gentrified seaside neighborhood. Now that the developers have purchased all other apartments, they pressure Clara to move. But she has pledged to leave only upon death, and will engage in a cold war with the developers to keep a home that has been a silent witness to her entire life.

A captivating film, earning Sonia Braga Oscar buzz for her incredible performance, “Aquarius” is a tale of two Brazils: the conservative elite in power and the people fighting to take the power back. Kleber Mendonça Filho knew best to show the power of the Braziilian people, through the eyes of a strong, mature, independent and intelligent woman. As a true #LatinaRebelde, a short conversation ensued regarding this masterpiece and her memorable character.

Marlena Fitzpatrick: I watched the film twice and I fell in love with it and the main character Clara. I want to be her when I turn 65! This is a free-spirited, strong and intelligent woman. Is she a feminist?

Kleber Mendonça Filho: What’s interesting about the film is that young women say exactly what you just said. They want to be Clara when they grow old. They think about loneliness, about life and time passing. They’ve established their own point of view in life in a very chauvinist society, so that’s a beautiful thing. The natural thing would be to think that older women would identify with Clara, but young women do.

Sonia Braga: These young women understand their rights and fight for them. And a lot of men identify with Clara too.

MF: What also makes Clara so fascinating is that it breaks every Hollywood imposed ageist stereotype.

SB: My only problem with that is that she’s 65 and I’m 66 right now. I feel much younger than she is!

MF: There you go!

SB: That character is young.

MF: She is. I also love how she broke the taboo that older women aren’t sexual. Sexuality in this film isn’t romantic. It’s mature. She shows us that it’s okay to break those age barriers. There’s this one scene where roles are reversed: she calls a young man, maybe half her age and she simply wants pleasure. Period.

SB: Frankly, I wish he was younger. The only problem with that scene, for the audience, is that if she was a man, that would be ok. In films, we don’t see that character. The artists are avoiding the subject. We, 60-70-year-old women, in society, we exist. We’re running for president, they are prime ministers, we are in science. The question is, why are we not in the movies?

MF: And who’s responsibility is to create those characters? Is it the writer? Is it the director? Is it the actor speaking up?

SB: I will say this: “Aquarius” is the best screenplay I ever read. What you see on screen is what was written on the screenplay.

KMF: I wrote the script. I wrote the character as you saw it, but it’s a marriage made in heaven because we have Sonia playing her. The normal procedure would be to write and cast a defiant granny. Sonia could never play that stereotype.

MF: And it could easily go that way, because it’s not just any grandmother, it’s a Latina grandmother giving “chancletazos.” In other words, is not just the Hollywood standard, is the stereotype they’ve permeated a Latina women.

SB: As Latinas, as Hispanic women, we’re not there. What’s amazing is that we spend more money in films than any other group. To not have that representation is very serious. About 20 years ago, my foundation NHFA (Jimmy Smits, Esaí Morales, Felíx Sánchez and I) went to Congress. We’re giving scholarships to young students so they can study arts. Are we helping or creating the problem? We’re not being represented, so we went to Congress to raise the question. And still last year, there was the same problem at the Oscars with the #OscarsSoWhite. They ended up calling more people to join to raise representation. Things need to change.

MF: That’s a good example of what the film tackles: the issue of displacement and gentrification. How the people in power continue to push us away at all costs. The establishment is trying to push Clara out of her home to build a luxury resort. It shows the clashes of class and racial tension to the point the film became a political scapegoat. How prominent is gentrification in Brazil?

KMF: It is very prominent because the cities are controlled by the market and big companies. Whenever you leave decisions to big companies on how the community works, it becomes divisive and it doesn’t work. It works for them in terms of making money, but it doesn’t work in human terms. That’s my main point in the film. What inspired me to write the film. I kept seeing this all the time in the city where I come from. However, we see this all over Latin America: decisions being made by money-hungry people on how the city should be ran and organized. A lot of these decisions do not take into account history, preservation and do not make the city human.

MF: Wow! Same happens here, I live in the Bronx and we’re going through the same issues. And with that I must ask, Sonia: what’s your definition of a Latina Rebel?

SB: It’s our first breath of life when we’re born. When the doctor spanks the newborn baby girl to show vital signs, that’s a Latina rebel.

MF: WHOA! A rebel is born! And for you Kleber, what’s your definition of a Latino Rebel?

KMF: I would just stick to the rebel. I think all these labels come from outside: Latino, Hispanic. You are who are to begin with. I see myself as a guy. I don’t really see myself as Brazilian or South American. I see myself as a filmmaker and every now and then as a rebel. Especially these days due to the political turmoil. I was put in a position of being and acting like a rebel, but I just believe in democracy.

SB: Actually, that’s important. For me, I’m a pacifist. I want peace. Our life matters. That’s what we want. We want peace, not “stop and frisk.” But for that, it’s gonna take a long road, it looks like. 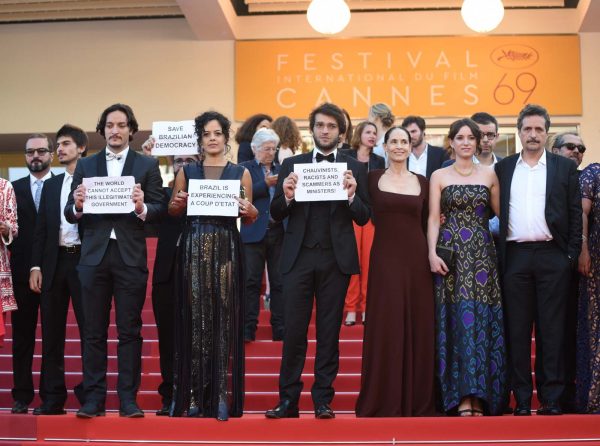 The Cannes red carpet was the scene of an unusual political protest as the cast and crew of the Brazilian film ‘Aquarius’ held banners denouncing the suspension of Dilma Rousseff as a ‘coup d’etat.’