Anthology of #LatinoLit Science Fiction/Fantasy to Take Off!

A new anthology featuring 21st-century Latino and Latina writers and artists helps imagine a our past, present and future. Latin@ Rising: An Anthology of Latin@ Science Fiction and Fantasy, published by Wings Press, will come out in February 2017. The book’s editor, Matthew David Goodwin, successfully used Kickstarter to publicize the book and pay writers and artists for their contributions. 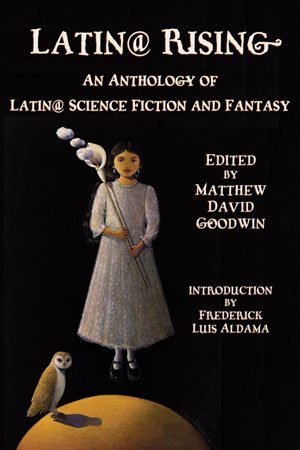 The 23 authors and artists included in this anthology come from all over the U.S. and from eight different national traditions. They include well-known creators, such as Kathleen Alcalá, Ana Castillo, Junot Diaz, Daniel Jose Older, and Giannina Braschi, as well as new voices, such as Alejandra Sanchez and Richie Narvaez, well worth hearing.

Goodwin, who teaches Latino/a literature at the University of Puerto Rico in Cayey, writes in his introduction:

“In his essay ‘Racism and Science Fiction,’ Samuel R. Delany warns against the use of narrow categories like ‘African-American science fiction.’ The separateness which such categories enact is congruent with the separateness of racism, as he puts it clearly ‘… what racism as a system does is isolate and segregate the people of one race, or group, or ethnos from another.’ … What we hope to do in this anthology is to counter the separateness of Latin@ science fiction and fantasy by presenting a thrilling multiplicity of writers and stories, and by demonstrating that these writers have been part of the genres all along.”

Latin@ Rising: An Anthology of Latin@ Science Fiction and Fantasy is slated for release in February 2017 through the San Antonio publisher Wings Press. To pre-order books click here.