PARK CITY, UTAH — “Carpinteros” (Woodpeckers), written and directed by José María Cabral, was the first feature film from the Dominican Republic to debut at Sundance in the World Cinema Dramatic Competition. The film showcases fresh Afro-Latino/Afro-Caribbean talent on the big screen. Outside of documentaries and away from the usual Euro-Latin representation of the Caribbean islands dominated by U.S. Cubans along with anti-Castro tales that permeate mainstream media, “Carpinteros” takes us to the land of Hispaniola through a modern tale of love in the unlikeliest of conditions. 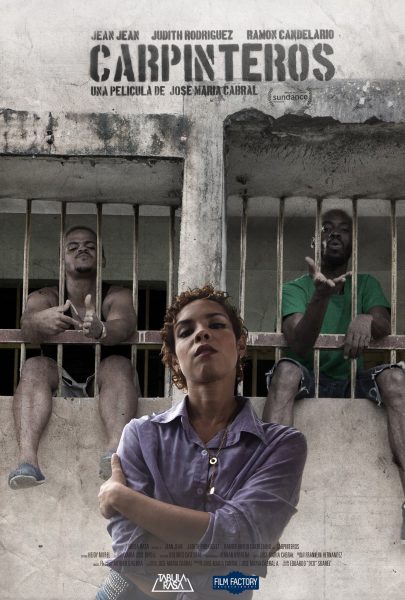 Cabral discovered a sign language of love developed between the male inmates of the Najayo Hombre prison and the women inmates of the Najayo Mujeres prison. Through a barred window, male prisoners use this sign language to communicate with their lovers located only 150 meters away adjacent to a field, developing relationships without ever having spoken or touched each other. Those who use this language of love are called “Carpinteros.”

“This inspired me to make this film because when I saw these prisoners living in unbearable conditions and a very terrible place in prison, they liberated themselves through love,” Cabral said. “And just seeing this was very emotional and based on real events.”

The feature is based on a love triangle formed between newly admitted inmate Julián (Jean Jean), who is chastised because of his Haitian blood but finds acceptance when he falls in love with the defiant alpha inmate Yanelly (Judith Rodríguez Pérez). Their bond forms after Yanelly’s petty criminal macho sociopath boyfriend Manaury (Ramón Emilio Candelario) extorts Julián into communicating with Yanelly through the window for him after he’s sent to solitary confinement. Yanelly, however, is quick to drop her deadbeat boyfriend and falls in love with Julián, seducing him to overcome an array of risks to get to her side of the prison—all through ‘woodpecking.’ Her violent and narcissistic ex stops at nothing to avenge his sense of betrayal.

Through this ironic and comedic quest for true love, the Dominican 28-year-old director also takes the audience into the actual prisons where the sign language was developed, exposing the hard conditions of overcrowding, heat and prison rioting. Aside from his lead principal actors, he also casted the inmates and guards from the prisons—all of which were monetarily compensated. He spent nine months inside the jails researching and developing relationships with the inmates and training with the actors. Inmates nicknamed him “El Preso Libre” (The Free Prisoner) for coming back and forth to the prisons every day. We got a chance to hang out with the director at a noisy bar at Sundance after his premiere. Check out his interview here:

At the start of the film, Julián gets his chemically straighten ponytail cut off as he checks into prison and is later told he was “perdido” (lost) for having a Haitian mother. Although there isn’t a heavy emphasis on the character’s background, this taps into the current social climate of the island when in 2013 a law passed by the Dominican constitutional courts stripping citizenship status away from Haitian immigrants and children born to foreign parents after 1929 creating stateless people with no access to health and education.

Professional actor and producer Jean Jean immigrated from Haiti to the Dominican Republic with his mother at the age of three and was left stateless. He describes playing this role as a form of activism pouring his personal experience into the character who he describes having gone through a process of reform inside the prison ridding of his own ignorance and finding self-validation through his crusade for love. 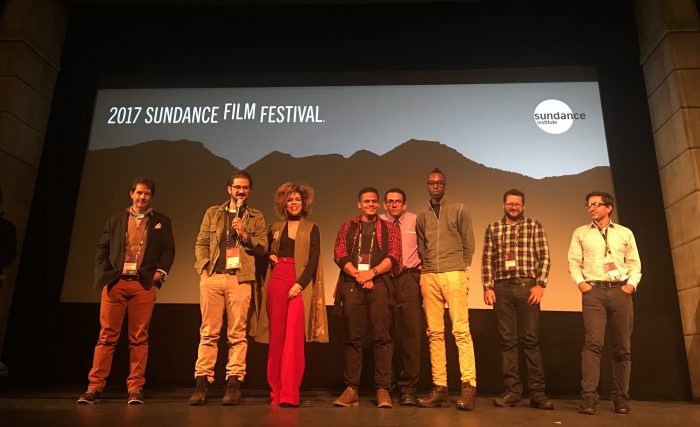 The “Carpinteros” team at Sundance. (Photo by Sharis Delgadillo)

You can hear Jean Jean politic on being stateless, women’s incarceration, and who Yanelly really loved in an interview he gave to Latino Rebels in Spanish:

We also got to chat in Spanish with actor Ramón Emilio Candelario about prepping with the inmates and representing at Sundance:

The movie has not been picked up for distribution but will continue showcasing throughout the film festival circuit including the Guadalajara International Film Festival.

Sharis Delgadillo is the co-host of Latino Rebels Radio. She tweets from @laxaris.