A Message From the Latinas Who Made the ‘White Girl, Take OFF Your Hoops’ Mural

Editor’s Note: We received the following statement via email and are publishing it in its entirety. 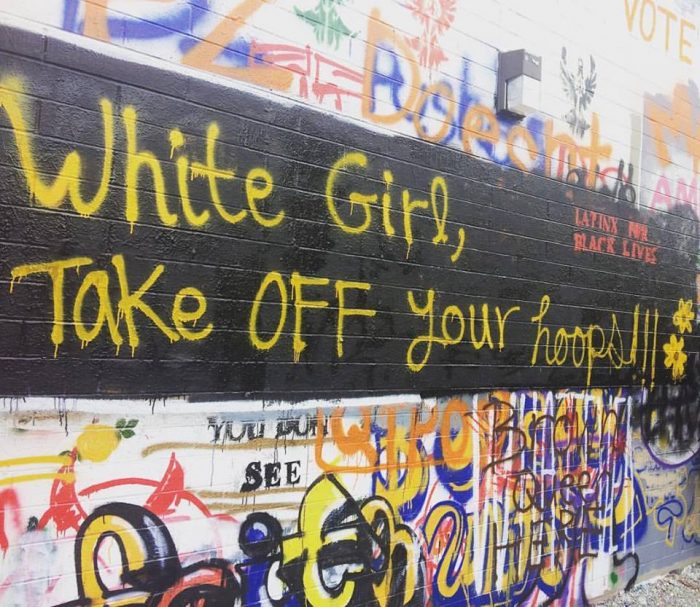 On Saturday March 4, Pitzer College students Alegria Martinez, Jacquelyn Aguilera and Estefania Gallo-Gonzalez took a stance against cultural appropriation perpetuated by white upper-class elite women by writing “White Girls, take OFF your hoops” on the campus free speech wall. The mural, a free speech piece of art, was not about banning white people from wearing hoop earrings but rather highlighting how women of color feel about cultural appropriation and the invisibility of institutional issues they face. The true meaning of the mural was to reflect the discrimination that women and nonbinary femmes of color face on college campuses when they are rendered invisible. The mural was not meant to police white women but serve as a form of education.

The article, “Pitzer College RA: White People Can’t Wear Hoop Earrings,” published by The Claremont Independent (a conservative student-run intercollegiate newspaper), takes the situation out of context, sensationalizes the mural and puts young women of color in danger. It seems that their writer has released students’ emails and identities to the larger community, violating their rights to privacy as students. Also, the publishing of students’ names and affiliations has endangered the students outside of the institution. They now are facing harassment from ultra right-wing groups and individuals, including a death threat through Facebook messenger.

This oversimplification of the mural’s message to “White women cannot wear hoop earrings” mirrors how misunderstood and invisible women and nonbinary femmes of color are at Pitzer.

Within higher education, women of color are robbed of their “aesthetic” through stigmatizing our historical Pachuca presence as “ghetto.” Latinx women are forced to assimilate into academia to be respected while their struggles remain invisible to the institutions. While navigating educational settings that automatically view us as unprofessional and unintelligent, women and nonbinary femmes of color are stripped of our hoops and our browness. As long as we conform to their standards, our existences can be legitimized, our voices can be heard and our contributions can be deemed as worthy by the white classmates and faculty that dominate academic spaces.

If we don’t conform, it becomes difficult to access campus resources, find job opportunities and create professional networks. Despite erasure, institutions knowingly label forced assimilation as a process of “professional socialization” rather than a process that violently strips identities and culture from women and nonbinary femmes of color.  On the other hand, white upper-class elite women are able to appropriate fashion created by marginalized groups with no consequences to their well-being, social acceptance, and academic success.

Pitzer College prides itself for its diversity and commitment to social justice; however, the constant trivialization of the concerns of students of color on campus further perpetuates the silencing of women of color, queer women of color, and nonbinary femmes of color within academic spaces. For those that discard this as an issue of jewelry, we ask that you remember the ways in which covert racism manifest itself with the support of deceivingly “diverse” institutions. Using women of color to promote diversity through publicizing our achievements for institutional benefit, Pitzer College is obligated to provide us with reciprocal support. Examples of changes Pitzer can implement to better support women and nonbinary people of color are:

In order for Pitzer to fulfill their core values of social responsibility and intercultural understanding, they rely on the work of women students, and faculty of color. The few classes that are taught by women and nonbinary people of color are the only courses that center the intersections of race, gender, class and queerness. Through personal agency, students of color must create their own support groups and networks to compensate for the lack of institutional support. Pitzer College then advertises the academic and social activism of students and faculty of color as an asset and reflection of its core values. The institution must ensure that women and nonbinary people of color are adequately compensated for the labor put into maintaining the college’s social justice oriented image. The treatment of the Latinx artists who created the mural is representative of the struggles faced by fellow women and nonbinary people of color at the college. Higher education clearly has an institutionalized issue in securing the rights and well-being of marginalized students.

Within a national context, white upper-class elite women feeling oppressed for being pressured to remove their hoop earrings is minuscule, compared to the daily political burden being placed on the backs of women of color, queer women of color, trans people of color, and nonbinary femmes of color under the current Trump administration.

This statement was written by the artists (Jacquelyn Aguilera, Alegria Martinez, and Estefanía Gallo-Gonzalez) and a fellow woman of color (Gabriela Ornelas) who have been affected by these issues. Support these artists and writers in their efforts to increase the visibility and safety of women and nonbinary femmes of color on campus. Share your thoughts using the hashtags #ExposeHigherEd #EndTheCI

3 responses to “A Message From the Latinas Who Made the ‘White Girl, Take OFF Your Hoops’ Mural”