College Protesters: Picking Up Where Others Won’t 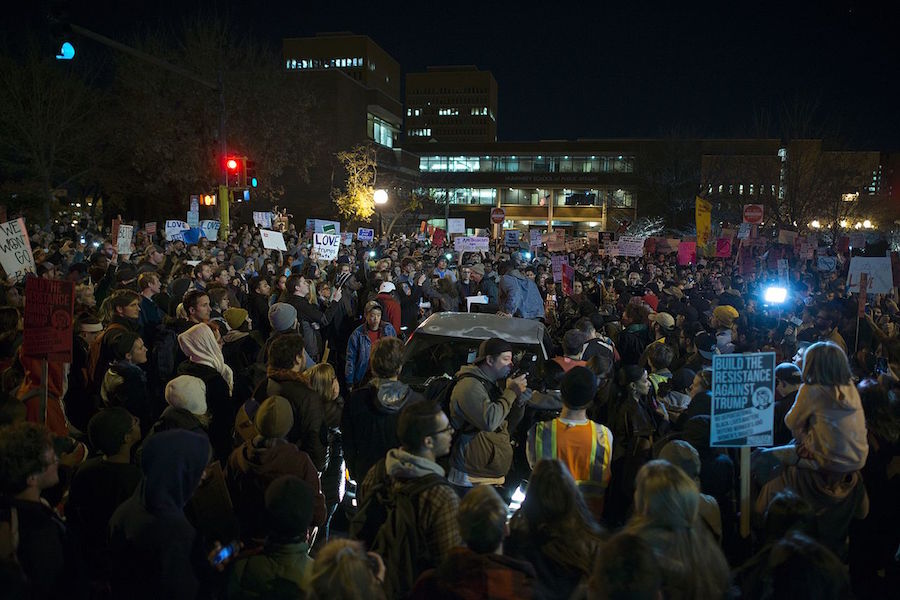 Alarms have been ringing at college campuses, with doomsday concerns over the demise of freedom of speech. None garnered more mainstream media attention than the modern-day tragicomedy of Milo Yiannopoulos, who was scheduled to speak at Berkeley—until enraged protesters went so far as to cause $100,000 in damage. Donald Trump even threatened to cut off federal funding to Berkeley for not allowing free speech and for practicing violence “on innocent people with a different point of view.”

If U.C. Berkeley does not allow free speech and practices violence on innocent people with a different point of view – NO FEDERAL FUNDS?

While the violence is undoubtedly condemnable, by exercising their own right to free speech, student protesters are confirming that free speech is alive and well at college campuses.

To borrow from the 1975 film, Network, college student protesters from Berkeley to Middlebury are mad as hell and they are not going to take it anymore. But make no mistake about it, they are also well-informed. They know the difference between social media jesters who belong on The Jerry Springer Show and individuals who have well-informed, intellectual perspectives worthy of college platforms. And they know the difference between provocative scholarship of privilege that offers nothing new and scholarship that offers something fresh. There is no doubt that protesters go too far when they use violence, but we cannot give all our attention to what they have broken without examining what is already broken.

Student protesters have been educated in public school systems that have stressed that only certain words should be read and heard, and they have had enough. They have seen states like Arizona ban ethnic studies in 2010 and have seen the state’s legislators consider a 2017 bill that would have doubled down on the ban by expanding it to colleges and universities. Had it passed, the bill would have banned “COURSES, CLASSES, EVENTS OR ACTIVITIES THAT … ARE DESIGNED PRIMARILY FOR STUDENTS OF A PARTICULAR ETHNIC GROUP … ADVOCATE SOLIDARITY OR ISOLATION BASED ON ETHNICITY, RACE, RELIGION, GENDER OR SOCIAL CLASS.” But even if these protesters were fortunate enough to have been raised outside of the Grand Canyon State, they are products of public school systems that provide token representation at best of ethnic figures and ethnic history.

It’s no wonder that so many Americans don’t recognize the name James Baldwin, the feature in the Oscar-nominated film I Am Not Your Negro, and coincidentally, the author of Nobody Knows My Name.

Baldwin is not alone. Names like César Chávez, Dolores Huerta, Junot Díaz, Sandra Cisneros and Esmeralda Santiago, for example, mean very little to most high school graduates. By the time they have gotten to college, these protesters know that they’ve been cheated one too many times and that they have an obligation to exercise their right to be heard. They can only take so much of that one-sided same old, same old disguised as something revolutionary.

Bear in mind these protesters have entered a higher education system that shows little promise of improving on its own. Colleges and universities are no meccas for diversity, and these student protesters refuse to be passive worshippers. A 2017 Inside Higher Ed survey of Chief Academic Officers revealed that “58 percent of CAOs strongly agree or agree that student groups’ demands related to curriculum should be turned over to faculty bodies for review and action, rather than administrators acting on the demands.” Not surprisingly, 1 in 3 CAOs does “not widely endorse adding support for departments that study minority groups.” With most of those in charge of academic programs preferring not to take action, the responsibility for change and equity falls squarely on students. And they’re showing that they’re willing to do what deans and presidents won’t.

With commencement season upon us, the call to disinvite speakers amidst protests gone wild is sure to make headline news yet again. If colleges want to avoid such scenes, they need to be honest with themselves about why they approve and endorse such speakers in the first place, and they need to condemn more than the violence. After all, freedom of speech is not reserved for laureates of hate and privilege. College students who take their civic responsibilities seriously and defend their own rights to free speech by protesting are keeping campuses from becoming safe havens for such impostors and they are reacting to a broken educational system. Until that system is fixed, I say carry that sign, brother, carry that sign, sister.

José B. González, Ph.D., is the Editor of LatinoStories.Com and the author of Toys Made of Rock.