I think it’s important to preface this piece by acknowledging that my direct connection to Mexico could be considered, at least by some standards, somewhat attenuated. As a third-generation Mexican American, it would be difficult for me, for example, to locate or even identify any relatives of mine currently residing in Mexico. English is my first language, and, although I do speak Spanish, I do so imperfectly and, as I am often told, with a slight but clearly discernible American accent. I guess that, in some respects, I could be considered an exemplar of (at least, functional, if not ideological) assimilation into American society.

I’d also like to make it abundantly clear from the outset that, as a U.S. citizen, I possess a strong and unwavering sense of loyalty to the United States of America and to the indelible promise of its democratic ideals. That’s not to say, however, that my sense of patriotism hasn’t been tempered to an extent by a nuanced understanding of the historical and contemporary realities of American society. And, while my version of patriotism is admittedly somewhat complicated, what I can say with complete certainty is that it is definitely not the unthinking variety of jingoism that is apparently being insisted upon these days by many Americans. 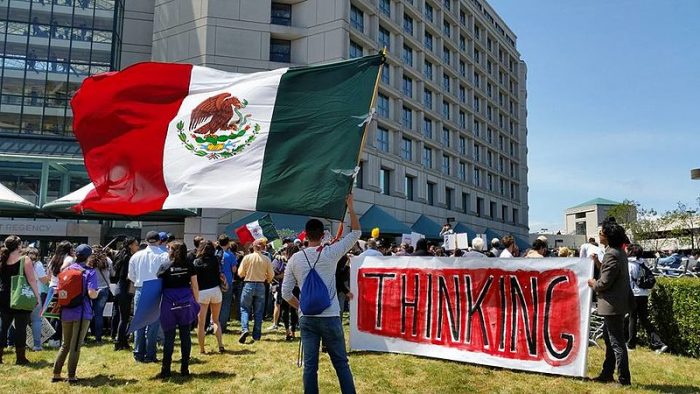 Protestors at California GOP convention in 2016. Photo by Aidan Maese-Czeropski

My sense of loyalty to the United States has always coexisted with a sense of solidarity with the people of Mexico. I find it difficult, for example, not to be concerned about the devastating effects of Mexico’s brutal drug war on Mexican society and by the pervasive and seemingly intractable corruption that continues to corrode aspects of the Mexican political, judicial, and law enforcement systems. It’s disappointing to acknowledge the deeply ingrained social and economic inequalities that continue to lacerate Mexican society, and I am alarmed by the often life-threatening challenges that Mexican journalists regularly face.

I can’t help but to feel a sense of indignation when Mexican immigrants are scapegoated, targeted and denigrated by American political figures at the highest levels of the U.S. government, and I’ve also always found it particularly difficult to just stand by and allow Americans, at times even my fellow Mexican Americans, to disparage and malign Mexican nationals.

In short, I have always intuitively recognized an enduring and immutable connection to a people with whom I share an ethnic and historical experience regardless of how attenuated my immediate or direct connection to Mexico might, by some standards, appear.

One of the unfortunate corollaries to my sense of solidarity with Mexico, however, has been an increasing awareness of the double standard that is often applied to Mexican Americans when it comes to appraising their loyalty to the United States. This double standard, which I refer to as the narrative of division, is defined by a dichotomous logic that equates any interest in or active support of Mexico by a Mexican American as an act of disloyalty towards the United States. I have personally found myself, for example, subject to various forms of admonishment, for among other things, wearing a Mexican national soccer team jersey, showing an interest in Mexican history and politics, displaying a Mexican flag, or, for daring to contradict some piece of conventional wisdom, however misinformed, regarding Mexico. More recently, I have had my loyalty to the United States scrutinized because of my outspoken and categorical condemnation of Trump’s anti-Mexican rhetoric and policies.

On a broader level though, I am reminded of the reaction to the immigration rallies that occurred in 2006 in cities throughout the United States. The fact that many of the demonstrators participating in these rallies were Mexican American and dared to wave Mexican flags provoked a firestorm of outraged hysteria in the national media. Syndicated columnist and Fox News contributor Robert Novak, for example, pointed out that “brandishing the Mexican flag” signaled a “divided loyalty to a foreign power.” Bill O’Reilly cited the display of the Mexican flag during the rallies as evidence of an incipient “race war,” while Patrick Buchanan, in one of the more extreme and bizarre manifestations of this thinking, discerned a vast and nefarious plot to reconquer the Southwestern United States in the “sea of Mexican flags” he observed during the rallies. 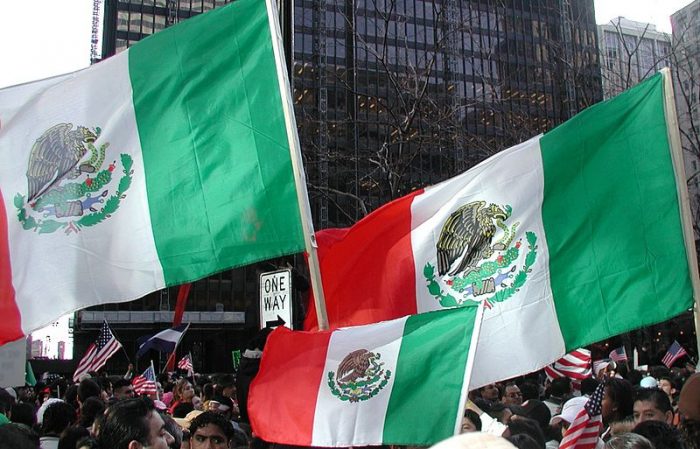 From the 2006 immigration rallies in Chicago. Photo by Michael L. Dorn

During the presidential campaign, Trump expressed a similar attitude towards Mexican American activists when he described the demonstrators waving Mexican flags at a particularly heated anti-Trump protest in Albuquerque in May of 2016 as “thugs” and “criminals.” Fox News quickly echoed this view referring to the protestors as “anti-Trump goons-waving the Mexican flag.”

It’s difficult to imagine any other American ethnic group being subject to such virulent attacks for simply expressing solidarity with the people of their ancestral homeland. Other U.S. citizens of various ethnic backgrounds maintain and promote ongoing cultural, political, and economic connections with their ancestral countries with apparent impunity. There’s the Cuban American National Foundation, for example, whose stated organizational mission is to “bring freedom, democracy, and respect for human rights to Cuba.” The organization also works “to promote international awareness about the political, economic, and social conditions currently taking place in Cuba.” It’s also worth noting that when Fidel Castro died many Cuban Americans openly brandished Cuban flags in the streets of Little Havana and other neighborhoods in the Miami area. To date, I haven’t heard any accusations from any source that these demonstrators were engaging in some form of subversion or expressing their loyalty to some foreign power.

There are also, of course, a multitude of Jewish American organizations that espouse ongoing cultural and political connections to the state of Israel. There’s the American Jewish Congress , the Simon Wiesenthal Center , the American Israel Public Affairs Committee, and the American Jewish League for Israel , to name just a few. The stated objective of the American Israel Public Affairs Committee, for example, is “to strengthen, protect and promote the U.S.-Israel relationship in ways that enhance the security of the United States and Israel.” The American Jewish League for Israel, an independent Zionist membership organization, is dedicated to, among other things, strengthening “the ties that bind Jews in the United States to Jews in Israel.”

By the way, each of the organizations mentioned above have developed websites which prominently feature the Israeli flag in one form or another. Many Jewish American college students have also openly brandished Israeli flags in their ongoing efforts to oppose organizations that are critical of Israeli policies like the Boycott, Divest, and Sanction movement. To date, I am unaware of any backlash or criticism against these particular groups for espousing these positions and engaging in these displays.

It’s certainly not my intention, however, to single out Cuban Americans and Jewish Americans. A range of American ethnic groups including Irish Americans, Italian Americans, Arab Americans, Armenian Americans, Polish Americans, and German Americans, among others, are actively involved in promoting cultural, political and economic connections to their country of ancestral origin. In fact, there are so many organizations involved in these type of activities currently operating within the United States that it would be difficult to complete even a cursory survey of these groups in an article of this length.

The point to be noted is that, as far as I have been able to determine, these organizations are rarely, if ever, confronted with the levels of criticism that Mexican Americans are regularly subjected to for displaying even the slightest form of solidarity with Mexico. including something as innocuous as waving a Mexican flag during a demonstration. And, as far as I know, members of these organizations have never been accused, at least not openly, of being anti-American for recognizing and promoting a connection to their countries of ancestral origin.

I’d like to be clear, however, that I am in no way taking issue with any of the organizations referenced above. On the contrary, while I may not agree with every position espoused by these organizations, the truth is I admire them, and applaud the rationale behind their formation and continued operation. What I am taking exception to is the double standard that Mexican Americans are apparently subject to when they engage in similar expressions of solidarity with Mexico.

Why is it acceptable, on the one hand, for Cuban Americans or Jewish Americans, for example, to actively promote a connection to Cuba or Israel respectively but not acceptable, on the other hand, for Mexican Americans to seek a deeper and more active connection to Mexico? As the obvious and logical answer to this question reveals, there is, in fact, nothing unacceptable about Mexican Americans engaging in acts of solidarity with the people of Mexico. And, contrary to the orthodox position on this issue, there is no inherent contradiction between being loyal to the United States, and simultaneously supporting the people of Mexico in their struggle for economic and political justice. In fact, supporting the democratic reform of Mexico along with the equitable treatment of Mexican nationals on either side of the border actually strikes me as a quintessentially American thing to do.

Ultimately, what is clearly unacceptable is for Mexican Americans to continue to allow themselves to be subject to and constrained by the narrative of division. As Mexico confronts the most anti-Mexican president in modern American history, Mexico is going to need the strategic cooperation of Mexican Americans more than ever.

Nicolás Mena recently founded a non-profit organization called Mexican Americans In Solidarity With Mexico. You can follow him on Twitter @solidaritywmex.