I had said Friday was the worst day of Donald Trump’s presidency. I was wrong. It is today.

Scarborough was referring, of course, to FBI director James Comey’s March 20 confirmation of an investigation into Donald Trump and his team’s connections with Russia. It’s almost like emails, except it’s a thousand times worse.

But folks like Trump continue to paint pretty pictures of themselves, and pretty horrid pictures of everyone else. Merriam-Webster defines propaganda as “the spreading of ideas, information, or rumor for the purpose of helping or injuring an institution, a cause, or a person.” (Emphasis added.)

Now, the Trump administration released more propaganda, but it wasn’t about the Russians.

Section 9(b) of Executive Order 13768 (the one best described by the hashtag #ICERaids) mandated a weekly report from U.S. Immigration and Customs Enforcement (ICE) on the number of declined detainers. Called the “Declined Detainer Outcome Report” (DDOR), it lists the jails that allegedly failed to honor detainers—requests by ICE to hold over detainees for up to 48 hours until ICE could come pick them up and begin the deportation process. 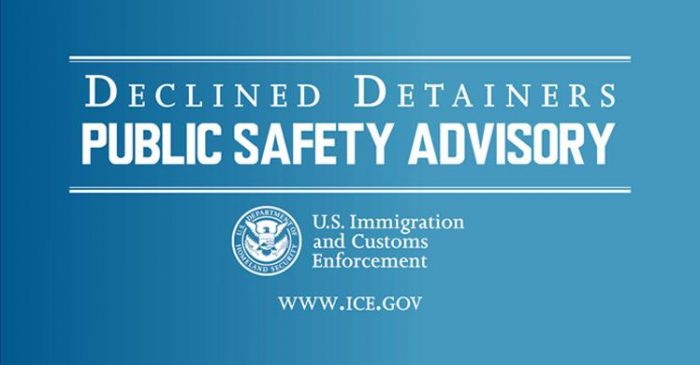 That costs taxpayers additional money on what is already an extremely expensive process. It turns jails into deportation pipelines and exacerbates (many times for very minor violations) the traumatic effect of deportation on children, family and employers. In addition, the report uses really fuzzy math to paint a false picture of crime-infested communities being overrun by immigrants. More simply: it’s not a local police officer’s job to enforce federal immigration law. ICE continues to complain they aren’t getting any help, but Trump is giving them 10,000 more ICE agent. ICE knows there is no way to deliver on a campaign promise to deport millions of undocumented people. So, crowdsource. Make others do your job and protest if they don’t. It’s like complaining about your bad grades because the smart kid didn’t help you.

Trump didn’t come up with this on his own. At least as far back as July 2015, the right-wing think tank Center for Immigration Studies urged Congress to mandate local cooperation with ICE detainers, running through the same type of numerology seen in the DDOR. For those who may not be familiar, CIS began as an “independent” offshoot to FAIR, the Federation for American Immigration Reform. CIS began as a FAIR program, which was started by Dr. John Tanton, a far-right white nationalist who believed Latinos were not as educable, saw immigration as a threat and whose organizations have now grown to wield considerable influence in the current White House. (Remember the Jason Richwine debacle from 2013? That had Tanton-like beliefs all over that story.)

That the CIS report from 2015 and the new DDOR report from ICE are barely distinguishable speaks to the root of the problem: xenophobia rooted in white nationalism is informing the immigration policy of the United States. And it goes without saying that the moment the DDOR was made public, CIR had a new “analysis” published about the report.

It’s not a coincidence.

And the propaganda rises all the way to the White House. For example, this past Monday, at the start of the first White House press briefing since Trump’s health care bill Friday loss, Attorney General Jeff Sessions was quick to cite the DDOR propaganda:

Note that the DDOR lists people who were both charged and convicted. This is because ICE wants to count people charged but not convicted as people “released” by uncooperative law enforcement. That the charges may have been dropped (or pleaded down; the DDOR does not clarify) is of no import: under the new administration, they are all top priorities for deportation. (In fact, even being charged isn’t necessary; just that ICE believes you committed an act that would be chargeable as an offense, and if not that, just being a threat to public safety, which includes merely overstaying a visa, which is not even a crime.)

The DDOR is an attempt to shame jails into doing ICE’s job. Jails that don’t perfectly comply are broadly labeled as “uncooperative jurisdictions.” And, of course, it lists cherry-picked data clusters of mostly low-level offenders and lists their country of nationality. It even counts as “declined detainers” where the jail did inform ICE of the presence of a foreign national, but not quickly enough. Acts of terror perpetrated by white nationalists, or crime committed by those born in the United States is simply not reported (yes, those crimes are still happening). Coupled with Trump’s misguided VOICE office (singling out victims of crime committed by immigrants) and other reports on immigration benefits issuance broken down by country, the administration seeks to continue the process of building a state-sanctioned alternative factual narrative correlating immigrants and crime. 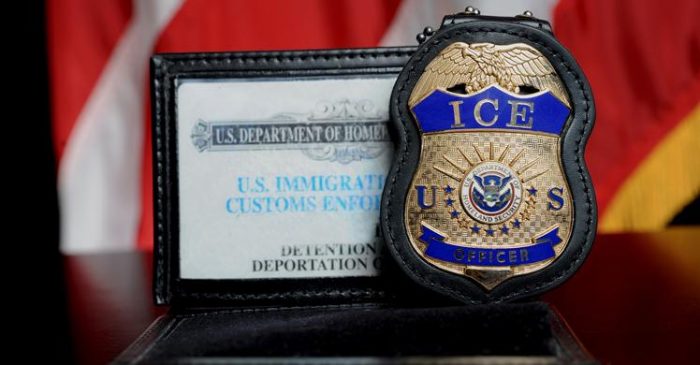 The ICE raids and the Muslim ban have taken up a lot of response time. But alternative factual narratives do much greater, long-term damage. We’re being told this is about transparency, but we’re only being shown one pane in the window. If we see it and call it the propaganda it is, we can engage in counter-propaganda, which is done by building bridges, strategic partnerships and relentlessly discrediting the credibility and motives of the propagandists.

Hassan Ahmad, Esq., is an immigration lawyer in Northern Virginia and has spent time volunteering at Washington-Dulles International Airport in the wake of Trump’s travel bans, as well as being a vocal opponent of the administration’s deportation policies. He tweets from @HMAesq.