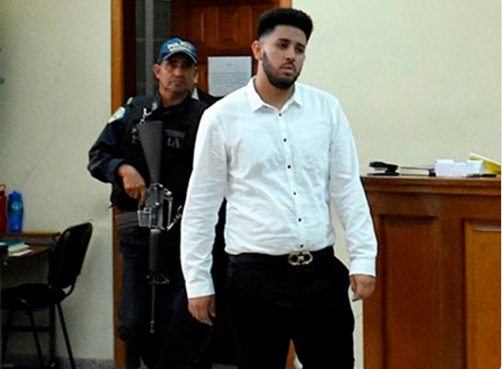 Hondurans recently took to social media to express outrage over the results of Honduras’s most controversial prisoner—Kevin Solórzano, a young college student found guilty of murder. To say that many Hondurans were upset and saddened by the court system would be an understatement, but in order to properly understand this reaction, it’s necessary for us to go back in time.

More Than Two Years in the Making

This all began in November, 2014. On November 11 in a small community named El Chimbo located just kilometers outside of Tegucigalpa, a former prosecutor was walking his children to his car when they were stopped by young criminals. Depending on whose witness testimony you want to consider, Edwin Eguigure and his children were intercepted either by two or by three individuals who immediately aggressively assaulted Eguigure. According to an autopsy report, Eguigure would die due to 40 stab wounds and two shots to his body. The first reports of his murder began circulating within hours on Honduran newspapers like La Prensa. A few of them include the original witness testimonies which specified two individuals who approached Eguigure and his children, not three.

Eguigure was married to Maria Auxiliadora Sierra, a controversial figure herself in this court case due to her claims later on. At the time of Eguigure ’s murder, numerous people and groups expressed frustration, citing statistics from the Honduran National Commission Of Human Rights that before the time of his death, 84 lawyers were killed in Honduras between 2010-2014. Eguigure would be victim 85.

On November 20, a breakthrough occurred and newspapers began reporting that a prime suspect had been captured. It was Kevin Solórzano, a 19-year-old college student. Honduras’sInter-Institutional National Security Force (FUSINA) arrested Solórzano. On November 21, Solórzano declared that he was innocent, saying that he’ll prove his innocence. The following day, Solórzano and the rest of the country were informed that he would be placed in the National Aurelio Soto Penitentiary for a few days while the government decides where he will be spending the time until his court case. Members of his family begin to appear on national media days later, calling for his freedom.

One of the first controversies about this case happened on November 26, 2014, when the press got their hands on a video showing Solórzano at his university very early in the morning, at 7:05 a.m. specifically. The video is from November 11, the same day Eguigure was murdered an hour later. However, the distance from El Chimbo to Tegucigalpa, as some articles note, is just 11 kilometers, definitely close enough that the distance can be traveled in a short period of time, but the video is compelling to Kevin’s supporters.

After November, things began to slowly intensify. In February of 2015, Eguigure’s widow returns to the public eye after making a controversial video where she claims they were attacked by three individuals who didn’t cover their faces because they intended to murder everyone. It is never explained why they didn’t cover their faces.

The arguments which took in the trial by April of 2016 were featured in an article by El Heraldo. They said that the prosecution used a socioeconomic study and a phone as part of their arguments and the defense used expert witnesses and testimonies.

Throughout this entire process, Hondurans used social media to talk about Solórzano. Entire social communities emerged, creating content either for or against Solórzano. His older sister, Melissa Hernández, became a key leader of support base that organized marches throughout the country. One social community dedicated to helping Solórzano began to get attention, even some from Univision. Non-Hondurans began talking about this case.

By December, the case started coming to a close. Nonetheless, throughout the trial, numerous suspicious events have taken place, including problems with the witness list, replacing members of the tribunal designated to oversee the court case, changing the prosecutors and even scrapping witness testimonies. Early in December, Solórzano realized that he would be spending another Christmas behind bars, but evidence demonstrated that Solórzano got a ride from a friend to his university, helping his alibi that he was never in El Chimbo the day of Eguigure’s death. In addition, stunning testimony emerged, suggesting that Eguigure’s wife was the mastermind behind the crime. A woman from a gang claimed that Auxiliadora Sierra paid the gang to murder Eguigure. Was it a crime of passion? Miriam Gonzales, the person behind this testimony, also said Solórzano was not involved in the crime.

This past January, more witnesses came forth to testify for Solórzano, including his neighbor and a classmate (two separate people) say that Solórzano was not in El Chimbo at the time of the crime. Days later, a sketch-artist from the DPI (one of Honduras’ law-enforcement agencies) said that the descriptions of the perpetrators provided by witnesses did not match Kevin’s facial features. Apparently, the person responsible for these descriptions was one Eguigure’s children, and this specific statement was later ignored by the tribunal who declared Kevin’s guilt. Weeks later, on February 8, Honduras is rocked by the tribunal’s judgment. It found Solórzano guilty of Eguigure’s murder and also guilty of the attempted murder of Auxiliadora Sierra and her surviving family.

At the end of the day, the tribunal said that Auxiliadora Sierra’s testimony was the only one it viewed as credible. Additionally, the tribunal admitted that Solórzano was at the university as true, but it did not view that fact as evidence that he didn’t commit the crime.

Although Solórzano was found guilty, no one can deny the popularity of the movement to free him. His legal battle has captivated the attention of the Honduran public and resulted in dozens of articles across numerous Honduran publications but nothing in English, aside from my own translations and documentation of Solórzano’s trial.

The prosecution wants Kevin’s sentence to be 40 years in prison, the minimum sentence for murder and the maximum sentence for attempted murder, although an explanation from El Heraldo stated that prosecutors are seeking 23 years for murder and 17 for attempted murder. The defense is fighting for 30 years in prison, stating that they are seeking the minimum penalties for both crimes (which is actually 33 years not 30, according to information from an online copy of the Honduran penal code.

Currently the exact date Kevin’s sentence will be determined is unknown, although it was originally supposed to be on March 15.