A few days ago we shared the news of a hunger strike happening at the Northwest Detention Center in Tacoma, Washington. This afternoon, we received the following media released from NWDC Resistance: 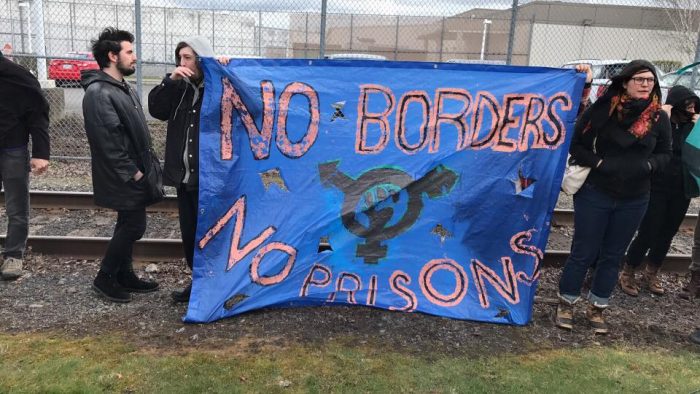 Tacoma, WA — Immigrant women caged at the Northwest Detention Center confirmed that they have joined the hunger strike that has grown at the facility since this past Monday in protest of conditions inside the immigration prison. Supporters continued an outside encampment, receiving constant updates from people detained.

The women’s pod at the Northwest Detention Center got news out that they had joined the strike… One of the women described conditions that led them to join the hunger strike, which include delayed court proceedings, and being given terrible food, and dirty, used underwear. The hunger striker, whose court proceeding has been rescheduled four times, stated, “We came here fleeing from our countries so that we could be heard and to ask for help…but we have been forgotten here.” She explains that the hunger strikers are being told that there is no outside support for their efforts, but that they nonetheless vow to continue their protest.

The strike comes as the Trump administration awards its first contract to a build a new detention facility to GEO Group, the private prison company that runs the Tacoma immigration prison. The deal for the construction of a new 1000 bed, $110 million immigration prison in Conroe, Texas, to be run by the GEO Group, brought extra urgency to protest. “People are risking their health and their lives to bring to light the abuses of ICE and GEO Group. For the government to continue to expand GEO Group’s capacity to cage immigrants at this time only highlights the need for the hunger striker’s protest,” stated Maru Mora Villalpando of NWDC Resistance.

A solidarity rally is planned for 6 p.m. tonight, with video from a hunger striker and band member from Raza Obrera singing an original protest song, and statements from family members of hunger strikers. For live updates, visit https://www.facebook.com/NWDCResistance/.

Yesterday,  NWDCResistance said that more than 750 immigrant detainees were participating in the hunger strike:

It also posted photos of some of the strikers:

ICE shared the following statement Thursday night through a spokesperson: