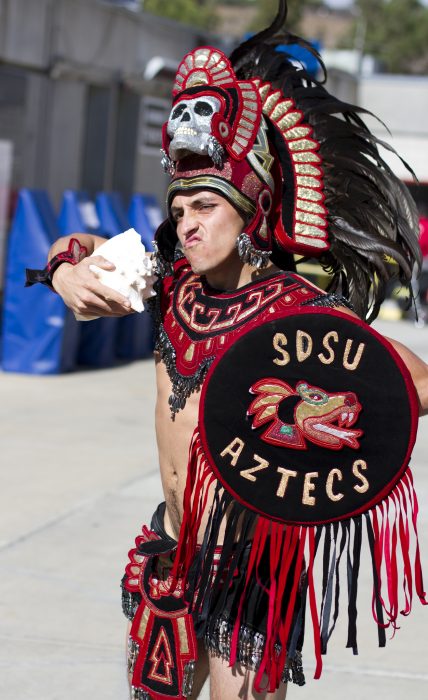 The following resolution, which will be voted on Wednesday by San Diego State University’s Associated Students Council, is calling for the university to no longer feature its Aztec Warrior mascot (H/T to Remezcla for providing a good summary).

Here is the complete text:

WHEREAS, people of all cultures, ethnicities, and religions have a right to be treated with dignity and respect; and WHEREAS, Title VI of the Civil Rights Act of 1964 states that: “It prohibits the discrimination on the basis of race, color, and national origin in programs and activities receiving federal assistance;”1 and

WHEREAS, in accordance with Title VI of the Civil Rights Act of 1964, programs and activities that receive Federal funds must operate in a non-discriminatory manner; and

WHEREAS, Executive Order 1097 from the Office of the chancellor of the California State University system states: “The California State University (CSU) is committed to maintaining an inclusive community that values diversity and fosters tolerance and mutual respect”, and further goes on to state that “The CSU strives to be free of all forms of Discrimination, including Harassment, because of a Protected Status. It is CSU policy that no Student shall be excluded from participation in, or be denied the benefits of, any CSU program or activity because of any Protected Status,”2 with examples of Protected Status including race or ethnicity; and

WHEREAS, the United States Commission on Civil Rights, by Resolution dated April 13, 2001, called for an end to the use of American Indian images and team names by schools: “The stereotyping of any racial, ethnic, religious or other groups when promoted by our public educational institutions, teach all students that stereotyping of minority groups is acceptable, a dangerous lesson in a diverse society. Schools have a responsibility to educate their students; they should not use their influence to perpetuate misrepresentations of any culture or people;”3 and

WHEREAS, in 2005, the American Psychological Association called for “the immediate retirement of all American Indian mascots, symbols, images and personalities by schools, colleges, universities, athletic teams and organizations,” based on “a growing body of social science literature that shows the harmful effects of racial stereotyping and inaccurate racial portrayals, including the particularly harmful effects of American Indian sports mascots on the social identity development and self-esteem of American Indian young people;”4 and

WHEREAS, San Diego State University’s institutional identity is, at present, comprised in large part of the “Aztec” moniker and the “Aztec Warrior” mascot based on a racialized stereotype of Native Americans; and

WHEREAS, the research featured in a San Diego State University graduate student’s thesis, entitled, Fail Montezuma!: The Last Vestiges of an Obscured Yet Stubbornly Persistent Culture of Racism at San Diego State University, reveals the history of how white supremacy, racism, and ignorance in general shaped the formation of SDSU’s present-day historically inaccurate institutional identity, and how that institutional identity causes some students and faculty to become “accidental racists” when they perform acts of “redface” in the name of “school spirit”;5 and

WHEREAS, Associated Students has inadvertently promoted the use of “redface” and other derogatory stereotypes of Native Americans that portray Native Americans as a violent people (“savages”), an example of which can be found in an accepted 2014 Homecoming Commercial competition video submission; and

WHEREAS, San Diego State University’s Policy file, in section 4.4 states: “The university shall cultivate a campus climate that promotes human dignity, civility, and mutual appreciation for the uniqueness of each member of our community. Because the university’s educational goals are founded on the values of intellectual honesty, appreciation for diversity, and mutual respect, it is critical that our academic and co-curricular programs, scholarships, courses, workshops, lectures, and other aspects of campus life reflect diverse perspectives. Freedom from discrimination, harassment, and violence against persons or property is a basic right and is requisite for learning…. By the same token, the campus community shall denounce and confront acts of intolerance, abusive behaviors, and the beliefs and past events that have separated us as a people; and

WHEREAS, in 2005, the NCAA adopted a policy to prohibit NCAA colleges and universities from displaying hostile and abusive racial/ethnic/national origin mascots, nicknames or imagery at any of the 88 NCAA championships and San Diego State University eluded the ban by committing an act of intellectual dishonesty, specifically when then-President Stephen Weber said “the Aztecs are not a Native American or American Indian culture…However, the Aztecs are central to the cultural heritage of Mexico,”6 thereby claiming that Mexico is not part of North America; and

WHEREAS, between 2010 and 2012, San Diego State University employed the use of a separate mascot, Zuma the Jaguar, as a “sidekick” to the “Aztec Warrior” to entertain children at football and basketball games, and so precedent exists of employing an alternate mascot identity;7 and

WHEREAS, San Diego State University’s Diversity and Inclusion Pledge calls on students, faculty and staff to pledge “To embrace the diversity of all individuals respecting such attributes as their sex, gender, race, ethnicity, age, class, citizenship, marital status, sexual orientation, nationality, socioeconomic status, religion, physical ability, mental ability and expression; To strive toward social justice for all people in order to create and sustain a safer, more productive, and inclusive campus environment; To refrain from using derogatory terms or statements that are harmful and disrespectful to others; To not contribute to stereotypes or make generalizations about individuals but rather to use my own experiences and interactions to better understand and embrace all people; To educate myself about cultures other than my own; To engage in and contribute to the diverse world around me; To actively honor this pledge within my everyday life;”8 and

WHEREAS, Native American students, faculty, administrators and staff are members of “our community;” and so

LET IT BE RESOLVED, that San Diego State University immediately acknowledge the history behind its institutional identity, how it was shaped by white supremacy and racism, that Mexico is on the continent of North America and so Aztecs are native Americans, thus this institutional identity is completely incongruent with its professed ideals and principles, and that San Diego State University and all its auxiliary and affiliated organizations will put an end, “with all deliberate speed,”9 to the intellectual dishonesty of historical inaccuracy and cultural misappropriation of the Aztec civilization and culture through ceasing the use of the term “Aztec” in any and all future naming, promotional materials, events and efforts henceforth; and that the “Aztec Warrior” mascot and moniker be authentically and immediately retired.

LET IT BE RESOLVED, that the San Diego State University president create a planning group or committee of San Diego State University students, faculty, and staff to phase out over three to five years all current names, symbols, signage and references which stem from the misappropriation of the “Aztec” and Aztec culture in 1925 (such as the names of residence halls, Calpulli Health Center, events such as Templo del Sol, conference rooms and halls such as Templo Mayor and Montezuma Hall, and “Aztec” branded programs, including but not limited to: Aztec Nights, Aztec Proud, Aztec Mentor Program, Aztec Achievement Awards, Aztec Dance Marathon, and others).

LET IT BE RESOLVED, that San Diego State University choose and accept a new, non-human mascot, such as an animal indigenous or well-known to this region of California10 during that planning group or committee.

LET IT BE RESOLVED, that San Diego State University prepare educational material which outlines the truth of the history behind this institutional identity, and why it had to be retired, and offer it for free to the public.