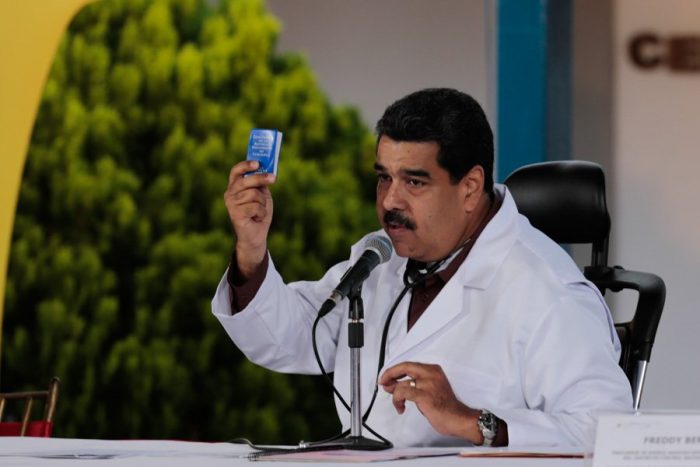 By LUCAS KOERNER of venezuelanalysis.com

Caracas, April 20, 2017 (venezuelanalysis.com) – Countries across the globe responded to Venezuela’s mass pro- and anti-government marches Wednesday that left one National Guard sergeant dead and dozens wounded in the latest round of opposition violence.

Speaking at a press conference on Wednesday, U.S. Secretary of State Rex Tillerson expressed “concerns” about the unrest in the South American country and accused the Maduro administration of violating constitutional norms.

“We are concerned that the government of Maduro is violating its own constitution and is not allowing the opposition to … organize in a way that expresses the views of the Venezuelan people,” he said.

“The world and Venezuela are deeply concerned about the recent US-launched bombs on Syria and Afghanistan,” the top diplomat fired back.

“Venezuela is likewise concerned about the immigration policies against Latin American citizens in the U.S. and institutionally promoted racism,” she added.

The European Union likewise expressed concern for the rising tensions between the Maduro administration and the right-wing opposition.

“We call on all Venezuelans to come together to de-escalate the situation and find democratic solutions in the framework of the constitution,” said EU Foreign Affairs spokeswoman Nabila Massrali, who also urged “an investigation into the deaths and acts of violence that occurred during the demonstrations, and for those responsible to be held accountable.”

The call to de-escalate tensions was echoed by the United Nations.

“We call on the Government of Venezuela and the opposition to engage sincerely to reactivate dialogue efforts,” UN spokesman Stéphane Dujarric said in a press release.

Meanwhile, a string of countries and social movements voiced solidarity with the Venezuelan government in the face of opposition efforts to oust the elected president.

The Cuban diplomat went on to warn other countries to “avoid any and all interference in [Venezuela’s] internal affairs that encourage coups or violent ends”.

“The [U.S.] empire’s plan is to overthrow the constitutionally elected president of Venezuela, Nicolas Maduro, as a warning to anti-imperialist governments,” the head of state stated via his official Twitter account.

“On this 207th anniversary of the cry of independence in Heroic Venezuela, spiritual power of Our America, we embrace you with affection, solidarity, and great faith in the victories to come,” Ortega said in a statement.

In addition to regional governments, social movements and civil society groups in over 20 countries held events in solidarity with Venezuela on Wednesday.

“I will use all of my power to convene in the following hours and days, with chivalry and honor, dialogue with those sectors of the opposition who want to sit down to talk about the future of the country,” he declared.

The head of state also said that he had appointed Foreign Minister Delcy Rodriguez, Education Minister Elias Jaua, and El Libertador Mayor Jorge Rodriguez as the government’s official spokespeople in any future talks.

On Thursday, Maduro indicated that sectors of the opposition had replied to his invitation to relaunch talks by way of messages relayed by “presidents, ex-presidents, and international personalities.”

“Today they [the opposition] have responded by four different channels that they are inclined to sit down for dialogue,” he announced on national television.

Nonetheless, the right-wing Venezuelan opposition coalition, the MUD, has yet to issue an official response to the president’s call. On Thursday, opposition leaders convoked fresh anti-government demonstrations, which reportedly saw further clashes between police and reduced numbers of protesters.

MUD spokesperson Marialbert Barrios announced that the coalition would “remain in the streets” until the government conceded to a motley of demands, ranging from release of those it terms “political prisoners” to early presidential elections.

Vatican-sponsored talks between the Venezuelan government and opposition broke down in December after the MUD walked out, accusing the Maduro administration of allegedly failing to comply with joint agreements.

This story was originally published on April 20, 2017 on Venezuelanalysis.com