Ever Since Trump Won, Morning News Shows Have Made Latinos Even More Invisible & Numbers Prove It

We have always suspected that ever since Donald Trump won the election last November, cable news was regressing in its attempts to diversify its audience, particularly with Latinos. Case in point, days before the election, everyone seemed to be talking about the Latino voter surge. Then, Trump won and there was a sudden pivot to the plight of the white working class. And who has lost out?

Take exhibit A from Media Matters, which released a new report of morning cable news show last week. The conclusion?

A Media Matters analysis of morning shows on cable news networks from January 1 to March 31 found that white men make up an overwhelming percentage of guest appearances on CNN, Fox News, and MSNBC’s morning shows. The study found that black, Latino, Asian-American and Middle Eastern voices are critically underrepresented, and women make up only a quarter of guest appearances. 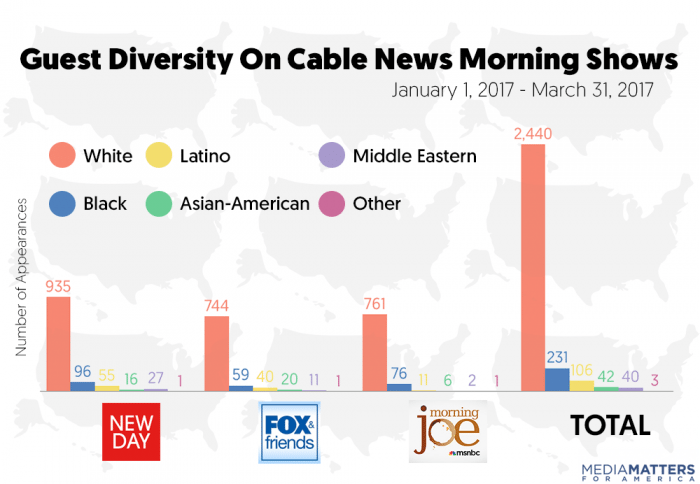 And when it comes to Latinos, Media Matters said this:

Latinos, who according to the census make up 17 percent of the population, were notably absent on morning shows. Just 5 percent the total guest appearances on New Day were Latino; Fox & Friends had 4.6 percent, and Morning Joe had less than 2 percent Latino representation.

Why are we not surprised?