After Rep. Steve King Mocks Latina on Twitter, She Visits His DC Office and Facebook Lives It

Earlier on Tuesday, Iowa Rep. Steve King (R) tweeted the following in response to a tweet from Vanessa Marcano-Kelly, who is from Des Moines, Iowa and is a member of Iowa Citizens for Community Improvement. According to Marcano-Kelly, she had a meeting scheduled with King in DC, and after realizing that the meeting wasn’t happening, she tweeted our her reaction and then King tweeted this: 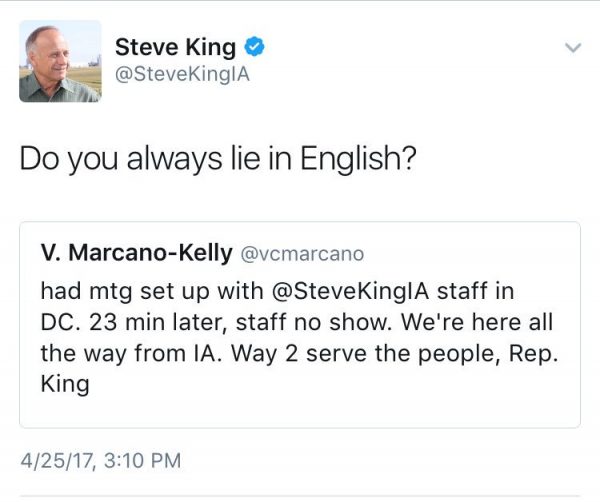 Hours after the tweet, Marcano-Kelly and other members of Iowa Citizens for Community Improvement went to King’s DC office and live streamed what happened. Watch Marcano-Kelly at the beginning of the video. It gets intense. Then it gets a bit weird (see the guy with the colorful socks). And finally, King’s staff tries to patch it all up.

Marcano-Kelly had shown up to ask for an apology from King and also why his staff didn’t meet with Iowa Citizens for Community Improvement. Eventually, King’s staff apologized for the meeting mixup but then said that it could not speak for King and what he tweeted. His staff also confirmed that it does not tweet for King, but that King himself composes all his tweets.

As for Marcano-Kelly, she does tweet in both Spanish and English, although her earlier Tuesday tweets were in Spanish only. Her Twitter profile says this: “healthcare & certified court SPA-ENG interpreter. translator | feminista. global citizen. secular. Venezuelan. | i love me some @liberalbastion.

About 30 minutes after the livestream ended, King tweeted out the following: 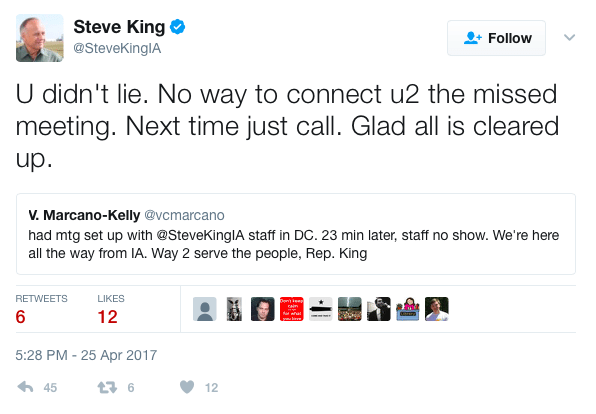