Delivered at the Second Annual Stars of the Future Gala for undocumented students, University of California, Irvine on April 8, 2017 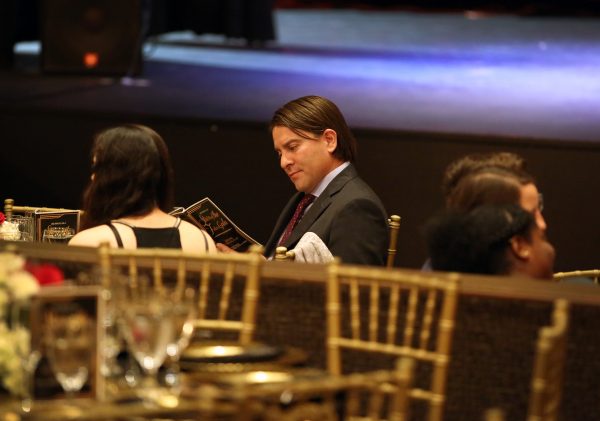 A photo of Joseph Morales, the night he gave the following speech. (Photos by GREG ANDERSEN & KAREN TAPIA)

Thank you for the opportunity to speak here tonight. It’s an honor for me—both personally and professionally.

I’m blessed to work at UCI. But like most of you, my story didn’t begin here.

In my journey through education, one thing is crystal clear to me: Anti-immigrant laws can affect families for generations. Their effects go on.

In my journey, I’ve seen ripple effects that are dark and tragic. These stretch back generations in my family. But I say to you tonight: We can turn the tide.

In you, I see pathbreakers. You are breaking ground for a far more equitable future. Your journey through education is unprecedented. You are all —truly— Stars of the Future.

My father is a high school dropout. His parents never went to school. My mother, defying the odds, graduated from high school. Her parents went to segregated Mexican schools outside Phoenix in Arizona.

I have no doubt my parents’ education was shaped by my grandparents’ racial and immigration status. They were Mexican, and they were undocumented.

When I say all my grandparents were undocumented, you may think they were all immigrants. But this isn’t the case.

My Dad’s mother, who I used to call Nana, was stripped of her U.S. citizenship, despite the fact she was born and raised in the U.S.

Her life story is not that uncommon. She was born in Southern California, got married, and together with her husband, worked and raised a family.

But, taking a closer look, her story is tragic. She was born in a work camp for Mexican railroad workers. Thanks to a law meant to test the patriotism of U.S. women, she lost her citizenship when she married a Mexican migrant.

For most of her life, my Nana was undocumented —a woman without a country— all while living and working in her own state, the state of her birth, California.

In theory, she became a Mexican citizen by marriage. In truth, she was, in her heart and mind, an American (or at the very least, a Mexican American).

She was one of the many women who were treated as disposable citizens under a turn-of-the-century expatriation act. The statute, which deprived women of independent citizenship, reads: “Any American woman who marries a foreigner shall take the nationality of her husband.”

I don’t take lightly this special opportunity to finally give my grandmother a voice. Her life story shows no one is safe. Whoever thinks progress in civil rights is a given needs to think again.

At the same time, her life story shows how unjust U.S. immigration and citizenship laws can be. For my Nana, her own country’s laws must have felt like a disheartening maze of xenophobia and gender discrimination.

My Nana would see the U.S. enter WWI, WWII and the Korean War before calling the INS to ask about her lost citizenship. (As you know, this took courage.)

In a letter dated December 28, 1951, an official wrote back to her with a perplexing sentence: “If the facts related by you are correct (i.e., that you have lived continuously in the United States since your marriage), it would appear that you again became a citizen of the United States on July 2, 1940, in accordance with legislation effective that date.” 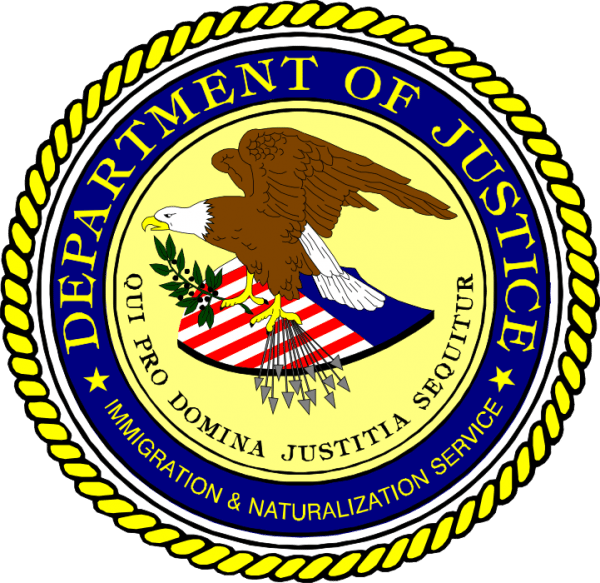 The fact is: My Nana never changed. The laws changed on her.

By that time, she had already lived through several waves of anti-immigrant attacks, including the infamous deportation raids in LA County during the Herbert Hoover administration. In her home, the same as in many other homes, President Hoover was cursed for scapegoating immigrants. 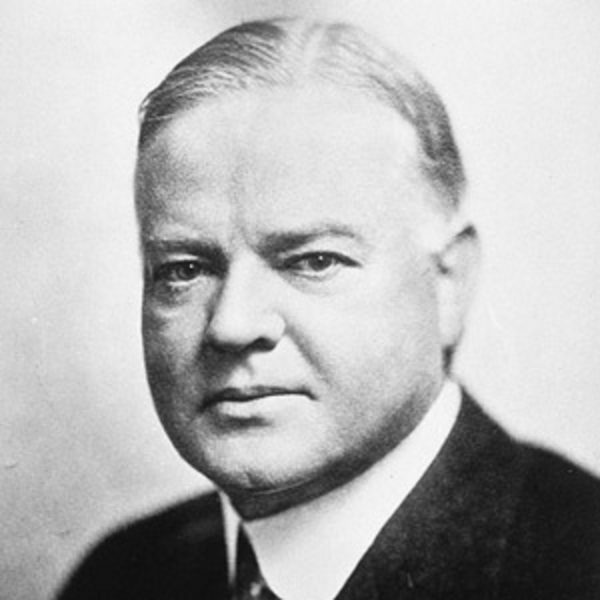 My Nana kept this letter from the INS in her purse. It was her only proof of any citizenship.

Years ago, after my Nana passed away, my father came to visit me while I was a visiting scholar at Stanford University.

This was a defining moment for me. It showed me how, in many ways, our lives don’t begin when we’re born.

Of course, there were the anxious discussions typical to any first-generation college family. In my case, my father was afraid to shake hands with my colleagues because, as he put it, they would see his tattoo of the Pachuco cross.

“These are professors at Stanford,” I told him. “Chances are when they see you’ve a tattoo for ‘mi vida loca’ on your hand, they’re going to be afraid of you.”

But the definitive moment —when I realized the depth of pain caused by my Nana’s undocumented life— came when he asked me about Stanford’s most visible architectural landmark, the Hoover Tower.

Most parents would feel proud if their child were at a prestigious university. Yet, as I explained that the tower was named after Stanford alumnus Herbert Hoover, my father became upset and said: “That #$@&%*! tried to deport my mother!” 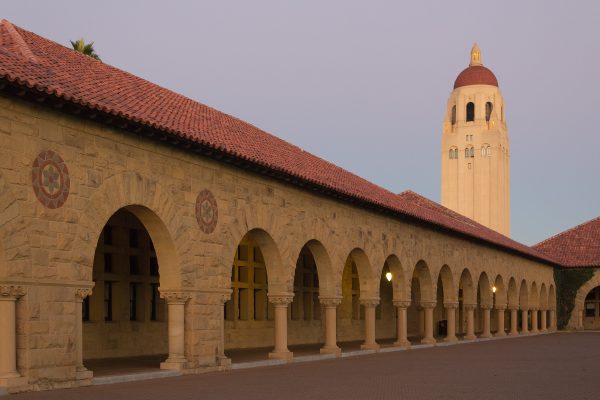 Striking is the length of time my grandmother was forced to live without a citizenship. She was legally expelled for 26 years plus another 11 years while she didn’t know her status.

Even more insulting, had her husband been racially eligible for citizenship, the Cable Act might have cut her expulsion to only eight years.

Getting an education was impossible for my Nana. When my father dropped out of high school, it must have seemed natural, considering neither of his parents had ever gone to school.

My father’s birth certificate lists his place of birth as “Labor camp #4.” When he was eight years old, he worked for a dollar a day, nailing lids on lettuce crates.

He flunked kindergarten because he didn’t know English. When he tried to check out books from a public library, he was told he couldn’t because “his family didn’t own property.”

When my grandfather heard this, he had my father go back to tell the librarian they owned a house in Watts—one of the few places in LA County where people of color could have a house. My father went home with the books.

This is a slice of my history, the history that shapes me as a person, a scholar, and an administrator.

The difference between my life, my parents’ and grandparents’ is:  I was born after the Civil Rights Movement.

This was a time of hope. When I went to school, I carried my parents’ and grandparents’ dreams with me. Getting an education changed my life, and by extension, changed my family’s life.

This isn’t to say it was easy. I’ll be honest. It wasn’t. When I went to college, I had no idea what I was doing. How could I?

After high school, I worked at a car wash. When I finally went to community college, I ended up on academic probation.

This changed when I realized:  Some of the people I knew who had gone away to four-year colleges weren’t exactly the shiniest apples in the bunch. Yet, there they were.

Maybe, just maybe, I thought, they were there because they had had someone, like their parents, to guide them. Maybe, I wasn’t there because mine couldn’t—even if they had wanted to.

Luckily, I transferred to UC Santa Barbara. I was amazed to find a global village of intellectuals just an hour away from the “factories in the field” that was my hometown, endless rows of lettuce and strawberries.

The faculty at UCSB guided me to graduate school. Thanks to them: I went on to the University of Chicago, a visiting post at Stanford, a doctorate at Berkeley and a second visiting post at Harvard, where I finished my dissertation.

The University of California changed my life. I believe it can change your life too.

Last December, thanks to UCI’s Dreamers Resource Office, I became an ally for AB540 and undocumented students. Seeing today’s post-election climate through my family’s history, it was important for me to learn how to support you, our students.

Today, when I look at our world, it seems some things have improved—while others are worse.

When I was growing up, it was only the mayor of my hometown and the governor of California who were openly anti-immigrant. Today, the same as during my grandparents’ lives, it’s the President of the United States.

My grandfather used to go to Calexico to wave to his sister across the border in Mexicali. He was afraid of getting too close to the border. Today, the border still divides friends and families.

After the election last fall, campuses across the nation vowed to support undocumented students. This is new. It took my family three generations to reach the University of California.

We know Trump wants to deport people. He has a narrow view of who is and is not an American. We know this misguided pipe dream has the potential to harm families for generations.

The question is:  What can we do? How can we step up to ensure equitable access to education?

For answers, I look to my family’s history of struggle. But the truth is: I look to you too.

I thank you for the opportunity to share this part of my life. The ripple effects of anti-immigrant laws stretch back generations in my family.

But I believe you can turn the tide. Your presence here at UCI is unprecedented. You do what many only dreamed of doing.

Despite what some may be saying, like all students at UCI, you have succeeded in life just by being here. But let’s face it. You have more to be concerned about than finals or crazy roommates.

All UCI students need help at one time or another to keep succeeding. You too may need help and yet more help. I encourage you to seek it out and hold people accountable.

Keep in mind: You are students at the University of California. That’s an amazing achievement.

On top of that, you have presence as campus leaders. To highlight only a few examples: You are the face of UCI as campus reps in Admissions (not an easy job to get). You have represented the White House (under the Obama Administration) as ambassadors to the Asian American and Pacific Islander community. You are artists, transfer students, mentors for local students who aspire to college.

You are turning the tide. Setting a new precedent.

Jacques Derrida, a famous 20th century UCI scholar, theorized that the future has a past. You are creating new pathways, the historical moment, that will set a precedent for a better future.

Instead, I’d like your children and grandchildren to tell stories about how your success is the reason they are in a good place.

To get there, I’ll do my part. And I know you’ll do yours.

Joseph Morales specializes in critical race and ethnic studies. He earned a PhD from UC Berkeley, has held research and teaching positions at UC Irvine, and has published articles and opinion pieces in peer-reviewed journals, at The Huffington Post and Education Week.