UPDATE, May 16, 7:15amET: The board of the National Puerto Rican Day Parade issued the following statement to the press. The statement makes no mention of a letter from Goya Foods or that the company stopped its sponsorship because Oscar López Rivera was leading the 2017 parade: 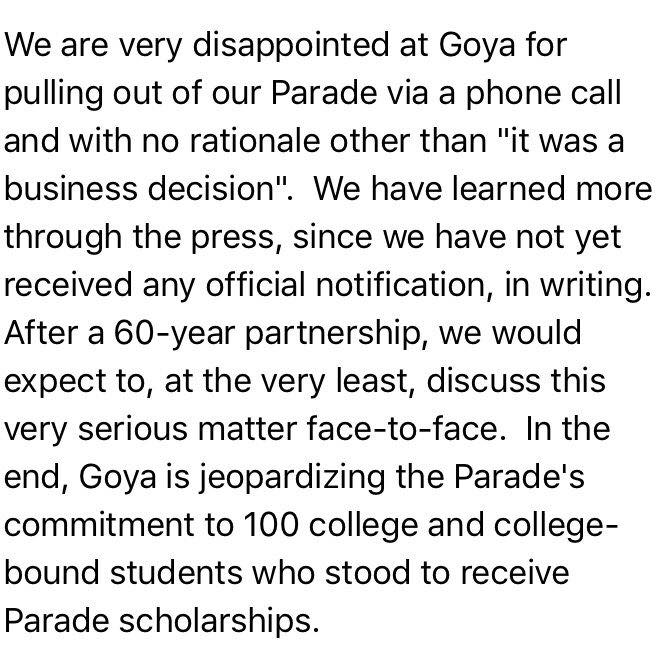 On Monday morning, our friends at the National Institute for Latino Policy (NiLP) sent one of their regular emails that linked to a May 15 post from New York state senator Ruben Diaz. According to the South Bronx Democrat’s post, Goya Foods is no longer sponsoring the National Puerto Rican Day Parade. Here is what Diaz wrote (it is also on his Facebook page):

You should know that after so many years as one of the principal sponsors, Goya Foods has decided to end its contribution and participation in the National Puerto Rican Day Parade.

Those voices on the cutting edge of our community tell us why Goya is exiting the National Puerto Rican Day Parade. They foretell the very dangerous downfall that the Parade faces if Goya leaves, and some of them blame this on New York State Attorney General Eric Schneiderman.

Diaz was referring to a 2015 investigation that eventually led to the termination of the parade’s previous board. In 2014, Latino Rebels had a lengthy interview with Madelyn Lugo, the parade’s former chair, that raised serious questions about how the parade was funded and organized.

The senator’s post also claimed Schneiderman has “neglected his duties to supervise and oversee the decision” of the new parade board.

“Without proper oversight,” Diaz wrote, “companies such as Goya Foods will retreat and end their association with the National Puerto Rican Day Parade.”

Diaz also suggested that JetBlue might also pull sponsorship of the parade (he cites no proof) and called for Goya to reconsider its decision.

Latino Rebels reached out to both the National Puerto Rican Day Parade and Goya Foods to comment about Diaz’s claims. As of this posting (screen grab from 11:40amET May 15, 2017), Goya Foods was still listed as a sponsor for the parade: 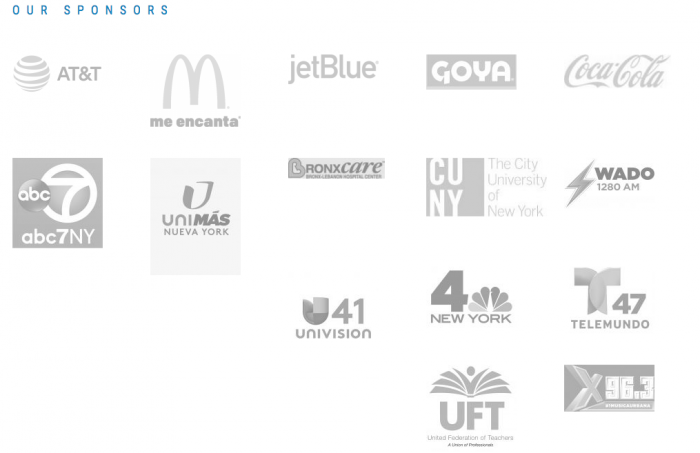 A few hours later, when Latino Rebels checked the sponsorship again at 1:45pmET, the Goya logo was no longer on the site: 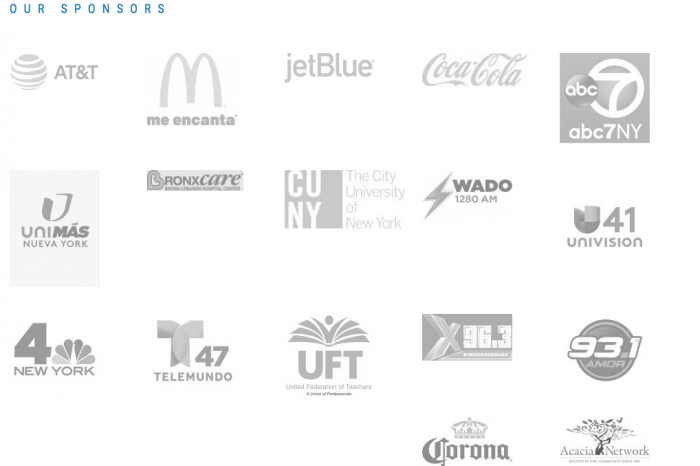 In 2014, Goya Foods announced on its company site that it had supported the parade since 1958, saying that “Goya has always been a staple in the Puerto Rican Day Parade since the very beginning.” Goya also featured the following video, where Goya’s Rafael Toro said the brand was “synonymous” with the parade.

Some Puerto Ricans are celebrating Goya’s decision because the parade was honoring Oscar López Rivera, whose federal sentence was commuted by Barack Obama earlier this year. An online petition from mostly Puerto Rican statehood supporters that has been circulating since early May against the parade was partly a reason why this has gotten some attention. 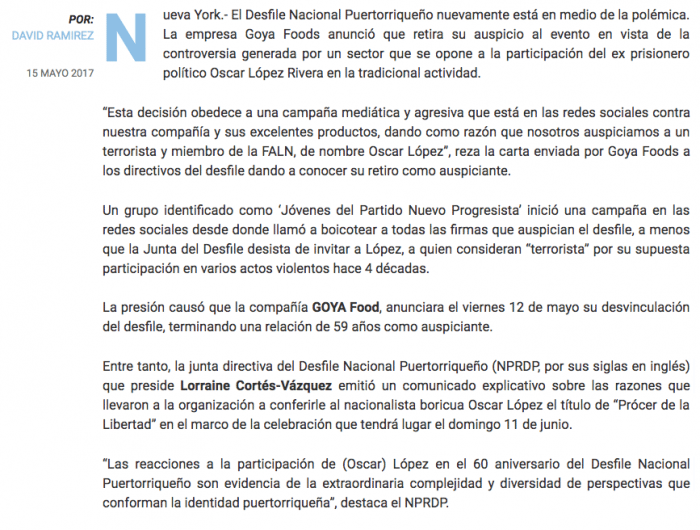 The reference to the letter is no longer in the El Diario story. And on May 16, Toro, the same Toro who appeared in the 2014 video about Goya and the parade, is now telling the media the following: “It was a business decision. We make business decisions all the time.”

Also on May 16, Goya Foods issued a statement in Spanish that was shared with the Puerto Rican press about why it had decided to pull sponsorship from the parade. Here is Latino Rebels’ translated version of a part of the May 16 statement that was published in Spanish:

The decision taken by Goya Foods to stop sponsoring the June 11 National Puerto Rican Day Parade in New York was strictly a business decision and based on its corporate policy of non-confrontation. Goya does not endorse or participate in events or activities that are controversial to the public or that polarize the opinions of the interested parties for or against, as has unfortunately happened on this occasion.

Our company has always been characterized by maintaining the highest ethical and moral standards, both in its business relationships and in the initiatives for the communities we serve as part of our social responsibility.

In the same May 16 statement, Goya Foods also specifically mentioned the El Diario story, saying that the report presented an “alleged letter sent to parade organizers from a representative in our company” that called for the elimination of sponsorship. Goya Foods called the letter and the allegations in that letter “false and contentious.”

El Diario acknowledged Goya’s new statement in a May 16 article.

The company told HuffPost “the letter was false and NOT written by Rafael Toro… or any employees or affiliates of Goya Foods.” El Diario has since removed any mention of the letter in their report.