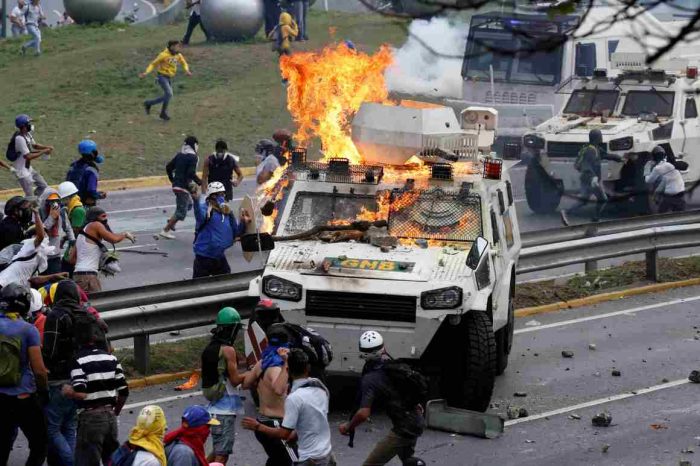 CARACAS, May 17, 2017 (venezuelanalysis.com) — A local police officer and a civilian have been arrested in connection with the murder of 17-year-old Carlos Moreno in April, while two police officers have been indicted for the killing of opposition protester Luis José Alviarez Chacón (18) this past Monday.

On April 19, bystander Moreno was shot dead while in the vicinity of an anti-government protest in San Bernardino, Caracas, by a group of men on motorbikes.

Civilian Alexander José Linares (40) and a municipal police chief, Jonathan Ramón Camacho Delgado (35), were arrested for the murder earlier this week, the public prosecution has confirmed.

According to the state body, Moreno was near to a public square, “where a demonstration was developing when a group of men on motorbikes threw tear gas and then opened fire on those present”.

Both men have been charged with first-degree murder, while Camacho has also been indicted for causing serious injury to a 48-year-old bystander, who was shot in the leg in the fray.

Camacho worked as a police chief for the Sucre municipality’s local force in the state of Miranda. PoliSucre falls under the control of the Mayorship of Sucre, which is currently held by opposition Justice First politician, Carlos Ocariz. It is unclear whether Camacho was on duty at the time of the murder, although Interior Minister Nestor Reverol has stated that the police chief had “infiltrated” the San Bernardino march, several kilometres away from PoliSucre’s jurisdiction.

In the aftermath of the murder, the opposition immediately blamed “armed pro-government collectives” for having opened fire on the demonstration. More recently, private media such as Caraota Digital have attempted to link Camacho to armed collectives in response to news of his arrest. Nonetheless, the media outlets have presented no evidence to substantiate the accusation.

As of Wednesday, authorities are also investigating the death of 15-year-old José Francisco Guerrero, who was shot near to an anti-government protest in San Cristobal, Tachira, at around 4pm Tuesday and died the following day.

According to statements from his family, Guerrero was on his way to buy flour when he was shot in the vicinity of an opposition demonstration. His sister has blamed the National Guard for his death, which brings the number of fatalities to 50 since anti-government protests turned violent on April 4.

The Public Prosecution has also indicted two officers from the National Bolivarian Police, Wilfredo Casanova and Carla Sayago, for the murder of Luis José Alviarez Chacón (18) who was killed while taking part in an opposition demonstration in Táchira on Monday.

The body has also assigned district attorneys to investigate the deaths of Diego Arrellano (31) and Yeison Mora (17) —also killed near to opposition demonstrations earlier this week— as well as the non-fatal shootings of three police officers in Carabobo and four in Barinas.

This past Monday, the opposition called on its supporters to carry out a nation-wide “sit-in” and block at least 50 freeways across the country. The sit-in was the latest initiative in more than six weeks of nation-wide anti-government demonstrations aimed at forcing the national government to step down. It was followed by a “nocturnal march” called for this Wednesday evening at 5pm.

The latest round of demonstrations have given way to escalating levels of violence. On Wednesday morning, Interior Minister Nestor Reverol confirmed that eight “violent protest focos” were registered in Miranda and in the Colombian border state of Tachira on Tuesday night, while several police headquarters had been attacked.

The minister also revealed that six alleged Colombian paramilitaries had been captured in relation to the incidents in the border state.

According to Reverol’s statements, the paramilitaries were contracted by members of the Venezuelan opposition and were caught wearing presumably stolen national police uniforms. The alleged paramilitaries had reportedly published a photo on social media pretending to be “anti-government protesters” holding two national police officers hostage in order “to sow panic” amongst the population.

Defense Minister Vladimir Padrino Lopez confirmed Wednesday morning that some 2000 National Guard troops had been sent to Tachira to quell the violent unrest, although they were not authorized to use lethal weapons.

“I ask the opposition leaders calling for protests that they rectify and that they stop calling their people to the streets,” said the minister.

He continued: “We are responsibly making a call, on behalf of the government, for the violence to end, that those political actors calling, underhandedly, for peaceful demonstrations, while they know and we know that behind that lies a hidden violent destabilization plan to topple the legitimately elected government, we will not allow it!”.

Originally published on May 17, 2017 at venezualanalysis.com.