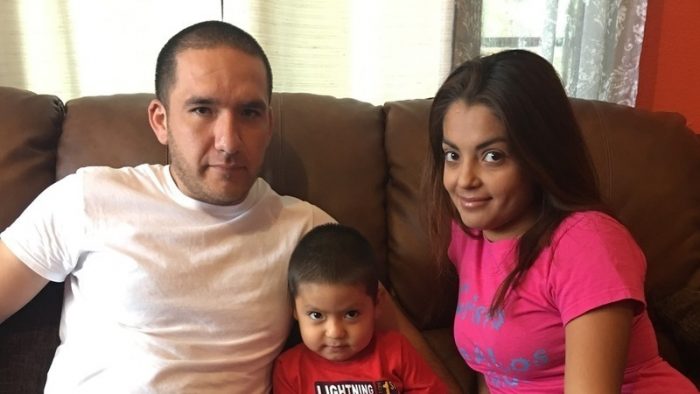 Noe with his parents. (Photo provided by the author)

Noe Martinez is a three-year-old U.S. citizen in need of surgery in August to prevent him from losing kidney function completely. If he does not have the surgery, he will have to go on dialysis and ultimately will need a kidney transplant. In order to obtain that surgery, Noe’s parents, Noe and Wendy, asked U.S. Citizenship and Immigration Services (USCIS) to grant them “Deferred Action Based on Humanitarian Reasons” so that they can transport him to and from the hospital through border checkpoints without fear that they will be detained and deported. USCIS Field Office Director Norma A. Limon denied the request without explanation, a departure that appears to exemplify the new level of heartlessness of immigration policy under the Trump Administration. On Thursday, the family’s attorney, Norma Sepulveda will be submitting a new request for deferred action for Noe’s parents.

Noe was born with a myelomeningocele, the most serious form of spina bifida and a neurogenic bladder. He is currently under the care of a team of surgeons, doctors, therapist and specialists working in collaboration to provide him the best treatment and care. Noe has already undergone 10 surgeries. He is unable to walk, eat a normal diet, drink anything other than water or go to the bathroom. He is 100% dependent on his parents, who love him dearly. Even though Noe has significant physical disabilities, he is a loving, playful boy who is full of joy. He has previously undergone medical procedures without his parents present, and it is incredibly stressful and traumatic for him.

Noe’s parents, Noe and Wendy, were in the United States on vacation as tourists while Wendy was pregnant. She started having contractions, and her sonogram revealed that baby Noe’s head was larger than normal and that he had other abnormalities. Wendy had prenatal care in Mexico and was never made aware of any issues. She had an emergency c-section, and baby Noe was airlifted to the hospital. After Noe’s birth, his parents remained in the U.S. to be close to the medical care that Noe requires. They were able to travel to Corpus Christi regularly to obtain Noe’s surgical and medical care, showing their tourist visas and appointment letters. Last October, Noe’s parents were stopped at the checkpoint in Sarita and told that they needed a travel document in addition to their visas to go through the checkpoint, for which they immediately applied (and were ultimately denied after many months and after having provided extensive evidence).

Amy Maldonado is an immigration attorney. She tweets from @AmyMaldonadoLaw.