On Monday morning, Latino Rebels received the following image from a reader in Idaho. According to our reader, it is a photo he shared after coming out of a gas station and finding notes on his windshield. The notes are simple printed pieces of paper with the national federal government hotline for the “deportation of illegals.” It also called for people to “report illegals and the criminals that employ them,” asking to “take back our country and our jobs.” It ended with the following: “Manditory [sic] jail time for those who employ illegals.” 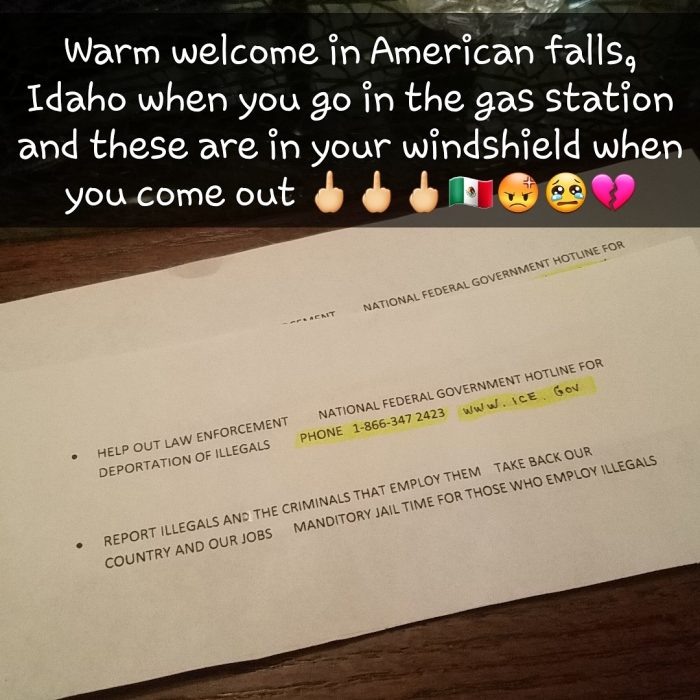 When we asked our reader the origin of the photo, this is what he wrote to us:

Good morning. Last night while inside the gas station, someone left these notes on my windshield. What’s important to note, is that the community of American Falls, Idaho, is that of immigrants making a living off the local agricultural economy. (You know, Idaho potatoes) The majority of the population around American Falls, and all the other farm towns all around Idaho are filled with migrant workers and their families who have made Idaho their home. Even the local police in the past have been immigrant friendly when choosing not to notify immigration for most petty crimes and traffic infractions, like driving without a license.

I feel that this an intimidation tactic against our community and a violation of basic human rights. This information needs to be disseminated upon a larger platform than I can reach, such as yours. And I would greatly appreciate it if you can bring attention to this and to our community of hard-working immigrants.

After reconnecting with our reader, he told us that the original image with the captions came from the Facebook page of Ritchie Lucero.