Stand With Hunger Strikers at the Adelanto Detention Facility

By Kristina Shull and Alfonso Gonzales 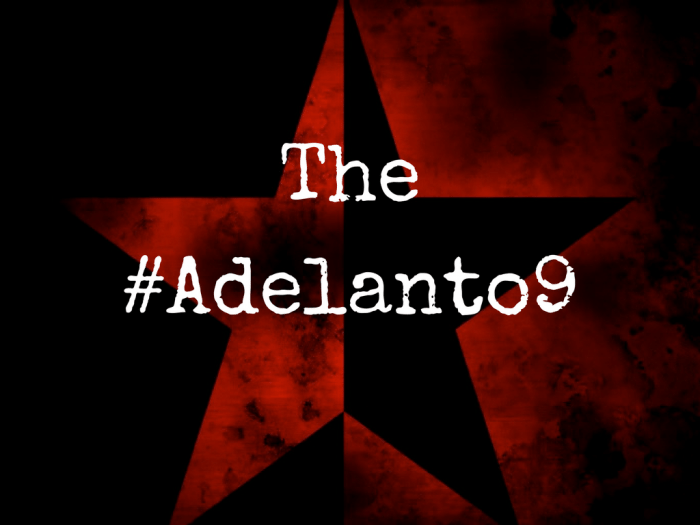 As most of us spend our summer enjoying the outdoors, firing up the barbecue and spending time with our families, the men and women being held at the Adelanto Detention Facility, operated by the GEO Group, are relaunching a hunger strike to demand their safe release and to protest inhumane conditions.

The recent protest should make us think about the crisis of democracy that we are facing under President Donald Trump. This is now the third hunger strike by detainees at Adelanto. What started off as the #Adelanto9 —nine men who were part of a refugee caravan that arrived at the U.S./Mexico border in May seeking political asylum— has gained momentum and now includes roughly 50 strikers.

The Adelanto 9 first announced their hunger strike on the morning of June 12. Two days later, 33 women launched a hunger strike of their own. Their demands include better medical care, fair bond amounts, to be reunited with their children and families, and to be treated “like humans, not animals.”

The names of the #Adelanto9 (asylum-seeking hunger strikers detained at Adelanto; 1 of whom has already been deported) being read at @CHIRLA pic.twitter.com/YpZTSktD5D

The Adelanto 9 have been subjected to abusive and arbitrary forms of punishment for exercising the most basic rights that one would expect to have in a democracy. Three deaths have occurred at the Adelanto Detention Facility since the new year, and human rights groups have been tracking ongoing egregious conditions and medical neglect.

The American Civil Rights Union (ACLU) noted that the detainees were cuffed and pepper sprayed for their peaceful protest in a clear act of retaliation. One striker was deported as the remaining eight were separated into four groups; and GEO guards mocked them and threatened to tell the immigration judge about the strike to undermine their cases.

ICE and GEO have not only denied the existence of the hunger strike, but have actively sought to destroy the growing solidarity movement around the Adelanto 9 and the plight of refugees in the U.S. For instance, on World Refugee Day, ICE turned away over 60 faith leaders and community members that traveled to Adelanto to visit loved ones, including those taking part in the hunger strike. In retaliation, GEO and ICE shut down visitation and locked everyone out, including lawyers and families with children.

As hunger strikes have resumed this week, the facility is still denying quality medical care, obstructing attorneys from visiting clients, and once again denying visitations. Because of this, both groups of women and men have resumed their strikes to demand good faith negotiations from ICE.

These are troubling times under the Trump presidency. Democracies are characterized by due process, fairness, freedom of speech, assembly and protections from unusual searches and seizures. Most importantly, they are supposed to be characterized by protection from the abuses of authority and government tyranny.

The repressive actions by GEO, ICE and ultimately of the Trump administration against the hunger strikers are a clear violation of the most basic constitutional guarantees and of the spirit and letter of the 1952 Refugee Convention.

The convention says that states are not to penalize those seeking refuge and should instead provide them protection. Yet, in Trump’s America, asylum seekers are increasingly being detained in immigration gulags that routinely violate their most basic constitutional and human rights.

In the first three months of Trump’s administration, immigration arrests increased by 38 percent. Under Trump’s watch, there have been changes to administration of immigration law, and court room practices that make it harder for asylum seekers to win their cases. There have also been well-orchestrated attacks against undocumented activists, including Dreamers, a Border Patrol raid on the Doctors Without Borders and intimidation tactics used against legal advocates.

We applaud California for defying Trump by providing for state-level oversight of detention conditions in its budget, and for introducing Senate Bill 29, the Dignity Not Detention Act, which will codify detention standards into state law for the first time. But these are only first steps. It is up to our Congressional leaders to show some leadership on this issue, as the hunger strikers at Adelanto are showing us the way.

Kristina Shull, Ph.D., is a Soros Justice Fellow at Community Initiatives for Visiting Immigrants in Confinement (CIVIC) and is the Editor-in-Chief of IMM Print. She also teaches History at UC Irvine.

Alfonso Gonzales, Ph.D. is an Associate Professor at the University of California Riverside and the author of the book Reform Without Justice: Latino Migrant Politics and the Homeland Security State (Oxford 2013).