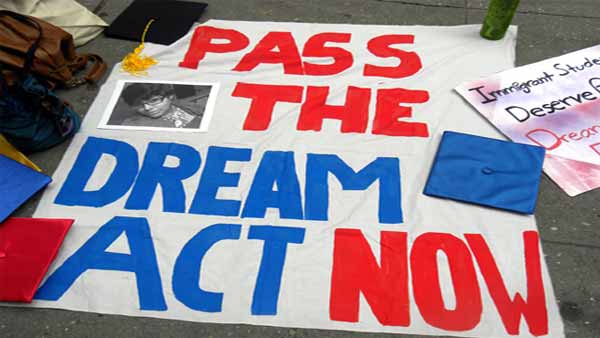 In response to a Monday report from McClatchy that senators Dick Durbin (D-IL) and Lindsey Graham (R-SC) are working on a new version of DREAM Act, one of the country’s top immigrant rights groups has created a petition, asking the Trump administration and Republicans to immediately co-sponsor the bill.

Here is the copy of the petition text from Dream Activist:

I write to you today to ask that your administration urge Republican members of Congress to immediately co-sponsor and pass the DREAM Act. Your administration has spoken out in support of Dreamers, and now is the time for action.

Since being first introduced in 2001, the DREAM Act has had widespread bipartisan support. This bill would allow the over 65,000 undocumented youth who graduate from American high schools each year a chance to finally be able to give back to their country. With the DREAM Act, these students will be able to study and work to contribute to the process of Making America Great Again.

Your administration has an opportunity to continue to make history and do what others have failed to, including President Obama who initially promised to pass the DREAM Act in his first 100 days in office. I urge your administration to push for the immediate passage of the DREAM Act and to call on congressional Republicans to support this effort.

Other groups have also shared their reactions to the news of a new DREAM Act. Here is what Kamal Essaheb, policy and advocacy director at the National Immigration Law Center, said via a statement:

Five years ago, the DACA program unlocked the door for immigrant youth who had previously been unfairly shut out from many of the opportunities enjoyed by their peers. Hundreds of thousands of DACA recipients are now going to school, working, and contributing more fully to our communities. DACA is hugely successful, and President Trump must keep it, regardless of any legislative prospect for a longer-term solution.

Since Trump took office, his administration’s doublespeak on DACA has forced immigrant youth to grapple with uncertainty and fear. The renewed introduction of the Dream Act, which has always enjoyed broad, bipartisan support, underscores the urgency of continuing to protect immigrant youth and to keep in place policies that allow them to thrive. Anything short of that would not only be morally wrong, it would be disastrous for communities and the economy.

As the president has said, the future of DACA is his decision to make. In making his decision, he can’t succumb to bullying by anti-immigrant hardliners trying to force his hand, and he must not forget that the lives of hundreds of thousands of people and their families hang in the balance. It’s past time for the president to stand definitively by the DACA program.

This is what United We Dream’s Greisa Martinez Rosas, a DACA beneficiary, said via her statement:

Today, 800,000 immigrant youth are protected from deportation and can work because of the DACA program and hundreds of thousands are protected by the TPS program. Both of these protections are under threat because of extremist anti-immigrant politicians who must be stopped.

United We Dream calls on all people of conscience and political leaders who support immigrants to organize and protect the DACA & TPS programs now.

The vision of United We Dream is to win permanent protection, citizenship and equity for all of our communities and our leaders will continue working steadily toward that goal. The news of a possible new Dream Act does not change our goal: to protect our families.

Legislation or not, we must organize to protect immigrants and Secretary Kelly and the President must keep the DACA promise.