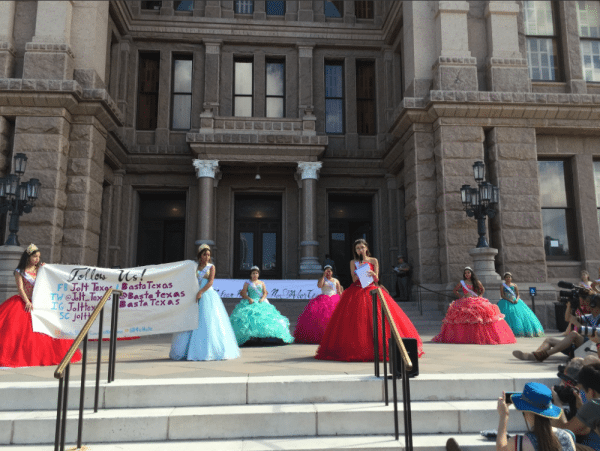 A Quinceañera took place at Texas State Capitol in Austin on Wednesday morning, but there was no cake or people waiting in line holding a rose to dance. Instead, there were 15 teenage Latinas, ages 15 and 16, holding signs that said, “No Hate, No Fear, No Profiling, No SB4 for Texas” and “Love for our family, for our community, for our Texas brings us together.”

This Quinceañera event, organized by Jolt, was a protest against the SB 4 “show me your papers” Texas anti-immigration bill signed by Governor Greg Abbott on May 7.

The SB 4 law will go into effect on September 1. It will allow local police officers to enforce federal immigration laws. In other words, a police officer can stop anyone just to ask for their “papers.” In addition, the law will require the state of Texas to stop executing sanctuary laws that protect detainees to be questioned by the local police about their immigration status.

“In Latino culture, Quinceañera is an important tradition to bring families together, to unite communities, to unite culture. Today, we do that to protest SB4,” Magdalena Juarez, one of the Quinceañeras said, as she stood at the stairs of the Capitol wearing a red dress.

During the protest, the 15 young Latinas wore the traditional colorful dresses used at a Quinceañera party. But besides the beauty of what a Quinceañera party can bring, these young women stood strong to tell Governor Abbott that this law is “the most discriminatory and hateful law in recent history,” Juarez added during her speech.

Latinos are 40% of Texas' population. We deserve respect & representation, not the discrimination that #SB4 promotes. #15ContraSB4 pic.twitter.com/fhQyMSwAlh

Each Quinceañera stood in front of the microphone to say why they do not support the law. In between speeches, these Latinas performed songs that have a pro-immigrant message.

Among them were “Immigrants (We Get the Job Done)” and “Somos más americanos”.

Many immigrant experts say this law will not only discriminate Latinos but will create fear among the community. Several lawsuits have been filed against SB 4.

We are standing up against hate and celebrating Latino culture here on the south steps of the Capitol! #15contraSB4 #resist pic.twitter.com/CQ0BUGEQg4

“SB4 discriminates the Latino community. It violates Latinos rights based on their color of skin. This is an attack to our community but we will fight back,” Emelyn Macias, another quinceañera said.

Viridiana Sanchez was the last one to speak up against the law.

“Repeat after me so Donald Trump and Greg Abbott can hear us,” Sanchez chanted. “We are proud and beautiful and we won’t back down, because we are Texas.”