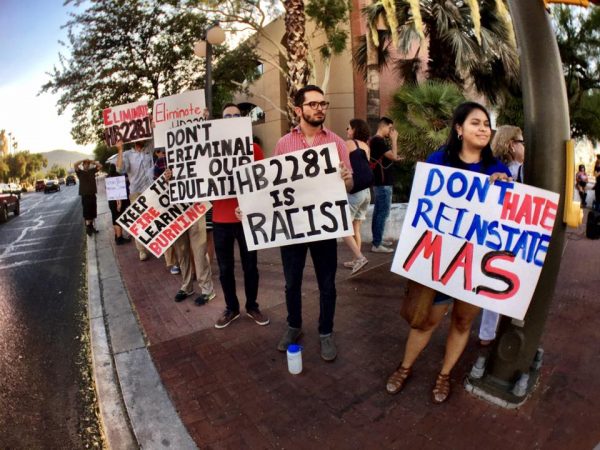 Students outside the court in June. (Photo by Bryan Parras @highTechAztec. Used with permission by photographer.)

On Friday, the Mexican-American studies (MAS) trial in Tucson concluded without a ruling. U.S district Judge Wallace Tashima will make a decision in the next few weeks on whether the law was intended to discriminate against Latinos.

The 2010 law currently prohibits public schools to include ethnic studies in their curriculum that “promote the overthrow of the United States Government, promote resentment towards a race or class of people, are designed primarily for pupils of a particular ethnic group or advocate ethnic solidarity instead of the treatment of pupils as individuals.”

This was the second part of the two-week trial.

Former Attorney General Tom Horne testified on Tuesday, maintaining his position to keep the 2010 law that bans the MAS program and hoping it eliminates all ethnic studies at Arizona public schools, according to a story by HuffPost’s Roque Planas.

Horne was one of the authors of the law, along with former Superintendent John Huppenthal, who testified in June during the first part of the trial.

Lawyers defending MAS argued that Horne and Huppenthal specifically targeted the program unlike other ethnic studies.

During the trial, the state questioned the program and its teaching of Che Guevara, according to witnesses in the courtroom.

Academic expert Dr. Angela Valenzuela, a professor at the University of Texas, testified in support of the MAS program. She spoke about the benefits that the classes bring to students. She mentioned research, showing students who took the MAS program performed better that those who did not.

People from around the country went to Arizona to support advocates of the MAS program.

Dr. Cesar Cruz Teolol drove from Los Angeles with his eight-year old son Amaru. During a phone interview with Latino Rebels, he said that “these programs should be championed. As an educator, it matters that every kid has the opportunity to learn their history and where they come from.”

Judge Tashima did not specify how many weeks it will take to make a final decision on the ban. He will be ruling in the “next few weeks.”