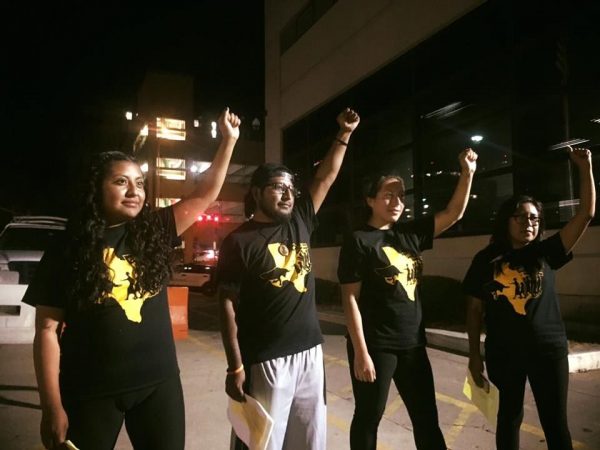 (Photo by Movimiento Cosecha/Used with permission)

“I want to say that I know if I did not have DACA, I would be in a very different situation right now. And my parents, my friends, my brothers and sisters in the struggle deserve permanent protection, dignity and respect. It is time for the United States to recognize the immigrant community, and that it depends on us.” said Jose Luis Santiago, one of the DACA recipients released, to a crowd of supporters outside of the jail.

Immigrant youth from across the country converged in Texas on Wednesday to participate in a civil disobedience action and pledge their renewed commitment to winning permanent protection, dignity and respect for all eleven million undocumented immigrants. Texas has become the battleground state in the struggle for immigrant rights in the Trump era. It leads the country in mass deportations and recently passed SB 4, the most anti-immigrant statewide law. It was Texas Attorney General Ken Paxton who spearheaded the call for the repeal of DACA. The immigrant community in Texas and across the country are confronting these attacks head on.

“With DACA under threat, we know that some will put their hope in DC politicians. But we also know that we won DACA not because of any politician, but because our community took fearless action. We marched, we walked-out, we stopped deportations and shut down detention centers. We took risks and put our bodies on the line to tell the people of this country that we were ‘Undocumented, Unafraid, and Unapologetic,’” said Maria Fernanda Cabello, a DACA recipient and spokesperson for Cosecha. “For the last 20 years, Republicans and Democrats have failed to deliver on promise after promise to the immigrant community.  We will not put our trust in them. We are putting our faith in our people. Taking brave action has been the only thing that has never failed us.”

“I want my community to know that politicians do not get to decide who is deserving of dignity and who is not,” said Catalina Santiago, a DACA recipient arrested in today’s action. “DACA is under attack while my parents, who are farmworkers, were never even given the temporary protection DACA provides.  I am getting arrested today to tell my parents, my community, and the rest of the 11 million that no matter what politicians say, you are worthy and we will not settle for the crumbs they offer us in exchange for being the economic and labor force that sustains this country day in and day out.”

“While I was in jail, all I was thinking about is how badly I want this for my parents.  I chose to do this for my parents, my community, and for everyone that is fighting, for everyone that is risking it all because they believe in the possibility of a better life,” said Miriam Zamudio another DACA recipient who participated in the action. “My reassurance came from knowing in my heart that I am on the right side of history. It was a hard decision, but I know I can’t sit back and watch.”