Reactions to Trump’s Possible Pardon of Arpaio: ‘He Has Shown He Is Racist and Against Our Community’ 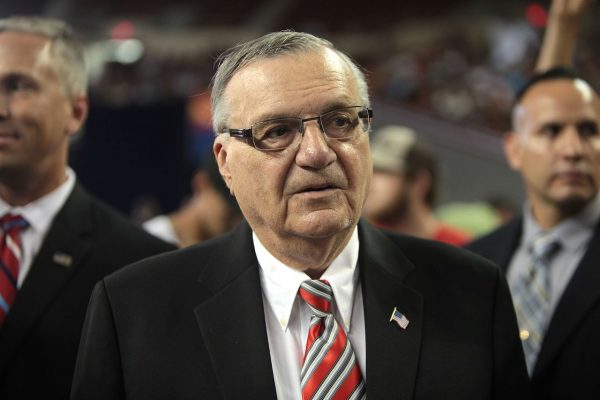 President Trump will be holding a rally in Phoenix next Tuesday, August 22 after announcing during a Fox News interview on Sunday that he “is seriously considering pardoning” former Maricopa Country sheriff Joe Arpaio, who was found guilty of criminal contempt last month.

“[Arpaio] has done a lot in the fight against illegal immigration” Trump said on Sunday. “He’s a great American patriot and I hate to see what has happened to him.”

Not surprisingly, Arizona’s Latino community and allies are not happy about Trump’s words or the upcoming rally.

By pardoning Arpaio, “he [Trump] is throwing a bone to the KKK, to the Nazis and to the white supremacists who are the biggest supporters of him,” community leader Salvador Reza said during a press conference organized by the Arizona Barrio Defense Committee on Tuesday.

“He has shown he is racist and against our community,” Reza added.

A federal judge declared on July 31 that Arpaio was guilty for ignoring what Judge G. Murray Snow had ruled back in 2011 to prohibit Arpaio and the Maricopa County Sheriff’s Office “from detaining persons for further investigation without reasonable suspicion that a crime has been or is being committed.” Arpaio continued racially profiling people to detain them and take them to the Border Patrol. He could face six months in jail.

Organizations across the country have already responded to the Trump’s pardon suggestion.

The ACLU has created a petition to demand the administration to not pardon Arpaio.

Make no mistake: Trump pardoning Arpaio would be an official presidential endorsement of racism. Sign the petition: https://t.co/PmJDAXz41Y pic.twitter.com/leSILeDdkg

Puente Arizona is already organizing to resist Trump’s visit. The groups will gather at the Phoenix Convention Center where the rally  will take place at 6pm to “send a very clear message that we will not pardon white supremacy the way he has done so with #Charlottesville and now with Joe #Arpaio,” the statement said.

Phoenix Mayor Greg Stanton also reacted to Trump’s rally and his intention to pardon Arpaio. “If President Trump is coming to Phoenix to announce a pardon for former Sheriff Joe Arpaio, then it will be clear that his true intent is to enflame emotions and further divide our nation,” a part of Stanton’s statement said.

My statement on Trump's August 22 event at the @PhoenixConvCtr. pic.twitter.com/nPYIHX5eVg

After Trump’s announcement, Arpaio told Fox News he “would accept the pardon because I am 100 percent not guilty.”

Arpaio endorsed and was a surrogate for Trump during the 2016 presidential campaign. It is unclear when exactly Mr. Trump will make a decision on Arpaio.

Arpaio is scheduled to be sentenced on October 5.