Editor’s Note: Earlier this week, Latino Rebels received this email from Cape Coral, Florida. We decided to publish it. 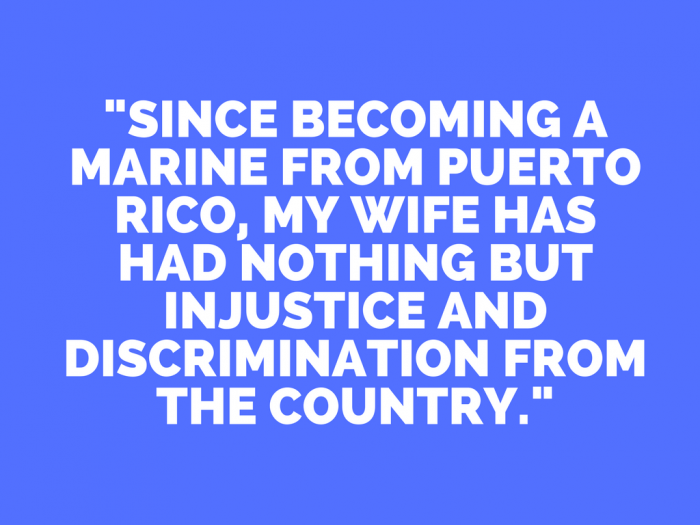 Since becoming a Marine from Puerto Rico, my wife has had nothing but injustice and discrimination from the country. She has had people walk all over her and treat her unfairly. She is however, a voice that will not go unheard. Below is only a recent form of injustice that she has experienced:

On August 20, 2017 my wife was tasered by the Cape Coral Police. Before this happened, my wife was on the phone with a Veteran Crisis hotline (Be There). She would call this hotline to vent, let out anger, and to lower her anxiety. She has PTSD (Post-Traumatic Stress Disorder). The night that she was talking to the Be There hotline, the police were called on her. My wife, who was outside in the front of the house, was telling the hotline that she feels that somebody was watching her. She couldn’t take it any more and needed to investigate. The lady my wife was speaking with hung up the phone and shortly thereafter the phone died. My wife plugged the phone in to charge, grabbed a cigarette and a lighter. She could see something moving, in the shadows, from the empty house across the street. This is when she cautiously went to investigate.

My wife went to the front of the house first, and then to the side. Since she could not see, she lit her lighter and was searching for a few seconds. All of a sudden she felt like she was having a heart attack. This was because the police officer just tasered her, without no prior warning. The police officer did not state he was there, nor did my wife know. The way that the police officers parked their squad cars—you couldn’t see the, from our house. Right after she got tasered, that is when she was ambushed. Police came from our house, they had our house surrounded, and also, to where she was at. This is when they turned on their flashlights. The officer that tasered her said “You’re a fu*king weirdo”. Another officer was telling her to stop resisting, while she was still on the ground. My wife informed the female officer that she is not resisting. This information was deleted from the Police Body Camera footage. Another office said, “You’re flexible!”

There were other comments made that were offensive to my wife. Also, a female officer came over to my wife and tugged on the front of her shirt, pulling on the taser bolt that was between her chest. My wife, out of pain from this action, said “OUCH!” The female officer, sarcastically said “Aww, did that hurt?” Eventually a different female officer removed both the tasers bolts, one between her breasts and the other on her inner thigh (Medical personnel are supposed to remove these bolts, but not police, from what I have been informed). EMS would show on the scene to check her vitals (finger prick and blood pressure).

I was inside during the incident. I heard the door leading to the garage open and figured it was my wife, until I heard a dog panting. A Cape Coral police officer came inside, with his dog. No knock or anything. He informed me that my wife has been tasered and guarded the door. Shortly thereafter, around six other officers came inside. None of them were talking to me.

My wife was taken to Salus Care in Ft. Myers under the Baker Act (an involuntary psychiatric examination). Once at Salus Care, she would stay for 48 hours. This is not the first time that my wife has been taken in because of the Baker Act. She has called different crisis hotlines for help, only to have the police called. She has tried to get psychological help from the Cape Coral VA (Veterans Administration), but the last time she was there this did not end up nicely.

On June 26 2017, I called the Cape Coral VA Clinic to see if Mental Health could see her that day. They stated that she has an appointment on the 29th, but if I can get her in the car then she can be seen. With that in mind, I take my wife to the clinic to be seen by her psychologist. The wait time was less than five minutes. While she waited, she went downstairs to smoke a cigarette outside. A VA Police Officer gave my wife a hard time and she said a rude comment to him that he did not like. He then proceeded to tell my wife that she couldn’t be a Marine because she is fat (which she is not). After smoking, she proceeded back upstairs to Mental Health. Once my wife was called, VA Police made their way to where she was. I informed the nurse and a VA designated police officer that this is not going to help her situation. She has been taken in because of the Baker Act before and it does nothing for her. She needed to see her doctor one-on-one and receive the proper care. They did not listen. My wife’s doctor only told her that she is going to be going to be taken in because of the Baker Act.

My wife, obviously, did not like this and was taken into custody by multiple police officers. She was thrown to the ground twice, landing head first both times. She received a busted lip, multiple bruising, and now additional pain in her back where she forced their knees (we are monitoring her back pain). The same officer that my wife had the altercation with, was the same one that forcibly placed his hand over my wife’s mouth and noise—to shut her up. Because of the blow to her head, she started to vomit, but was forced to hold it in. A nurse stated that she can not breath and the officer let his hand go. This resulted in blood and vomit coming out of her mouth and noise. After that she got a face mask placed on her. During this whole situation, with the police, our oldest son (11) witnessed everything from outside the hallway. My wife was telling our son that everything is okay, and blowing kisses. The officers did not see who she was talking too and thought she was crazy.

My wife did not receive the proper mental health and is now distraught with the VA and the police. She will not go back to the VA or speak to them because they tricked us into thinking they were going to help. Also, because of the situation with the police, she has a strong resentment towards them. This is also due in part to the fact that previous to this matter, she got was taken in because of the Baker Act when speaking to a suicide crisis line and the three police officers (Cape Coral Police) presented themselves with weapons pointing at her, while in our house. The officers have been to our house multiple times—only after speaking with a Veteran crisis hotline. Some of them have been here, more than once, and know the mental situation of my wife.

I have had to tell them a couple different times that we do not have weapons, and that this is not necessary. She means no harm to herself or to others. She is only frustrated and upset that many different people and organizations have gotten away with things that they have done to her. Because of the situation, my wife is now not able to receive the proper mental health care. Also, our oldest son should not of had to witness this happening to his mother. I have contacted the Patient Advocate in the VA, but have not been successful. I feel that, while Susan Billington does take my information, she is only blowing us off. I have requested from her that an investigation be done for the actions from the VA Police Officers, and the reason why my wife was taken in because of the Baker Act that day.

I have contacted their Executive Office to inform them of the situation and to get clarification as to why this happened. I have also reached out to her psychologist, Dr. Leone with no response. We have also contacted many different lawyers, none have yet to help us. My wife feels hopeless, insignificant, unsafe, humiliated, abused, and not well. She demands, and deserves, justice for these actions towards her.

She is simply a Marine Veteran looking for help‚only to be tossed around and ignored. The level of excessive force that the police used was not acceptable by any means. Being a Veteran myself, it disgusts me to see how Veterans are treated. Especially by the Police and the VA themselves. Veterans have sacrificed so much, only to be treated less than human.