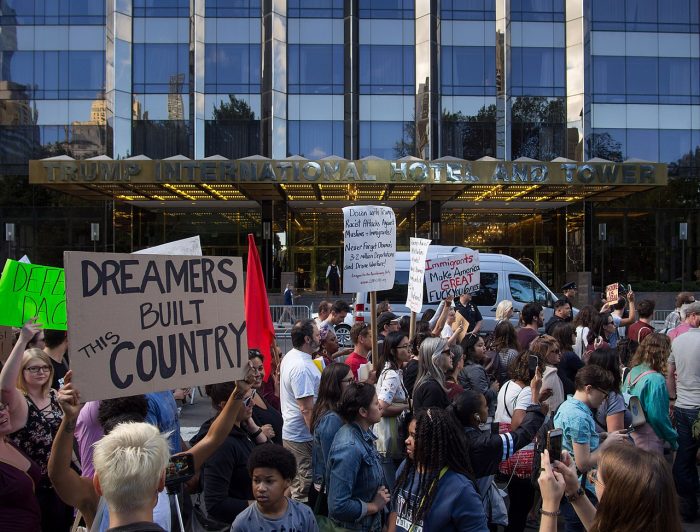 March and rally/protest in response to the rescission of Deferred Action For Childhood Arrivals (DACA) in New York City on September 9, 2017. (Photo by Rhododendrites/Creative Commons Attribution-Share Alike 4.0 International license)

Until I was nine years old, I lived in the United States illegally. I told no one and only revealed it in my first book, released this summer. Even after my status was legalized and I became an American citizen a month before the 9/11 attacks, I never discussed this secret aspect of my past with anyone, not even my closest friends and colleagues or the people I dated.

Although my status as an undocumented immigrant from Mexico was a source of tremendous private stress and even shame, I still managed to study sociology at Yale and Columbia, carry out research projects abroad, and now teach at New York University. But those facing the consequences of President Trump’s move to end (or now restore?) DACA won’t have the luxury of staying silent. In the coming weeks, factional bickering among Washington’s governing classes will have massive consequences for 800,000 young people who live next to us as neighbors and sit in classrooms like mine.

The fall semester is therefore starting off with an air of fear and protest. On the first day of classes, the commute to my classroom began with news of where activists fighting to save DACA were organizing rallies and sit-ins in Manhattan with a #SinMiedo (“without fear”) battle cry. Across the country, university presidents, Fortune 500 CEOs, celebrities, and others have quickly defended the students and employees facing the anxiety of what lies ahead as DACA is rescinded.

New York shows up to #DefendDACA! Chanting “the people, united, will never be defeated!” pic.twitter.com/Ok65QpDgZL

Part of my own American dream has been to explore and document the magic and mania of New York City’s downtown nightlife. My research delved into the scene’s exclusivity—all those legendary velvet ropes that have guarded the city’s most fabulous spaces, from Studio 54 and Limelight to Marquee and The Box. I try to realistically articulate how nightlife can be as much about keeping out certain people—including, at the start of my research, me—as it is about celebrating spectacle, glamour, and theatricality within

In a sense, exclusion and exclusivity abound in New York. Fashion Week has just ended, after triggering intense FOMO, or Fear Of Missing Out, as the city’s creative classes scurried to make sure that they and their plus-ones made it onto the best show and after-party lists. Fussing and pouting inevitably ensued. Grievances were aired and tweeted. But this kind of exclusion was almost a cruel caricature of what those facing the DACA decision now encounter. Disgruntled Fashion Week partiers probably ended up at some other incredibly chic event. But deportation will mean returning to a country that many immigrants barely knew and a loss of the lives that they have steadily built in this country.

When allowing someone into a party, seasoned door people seek out “the right look.” The venue’s gatekeepers want people who will contribute positive energy, aesthetic value, and yes, money, to the space inside. The goal for the best nightlife operators has always been what they consider the right mix: a true blending of races, genders, classes, and backgrounds on their dance floors. The ability to meet, mingle, flirt, drink, and dance with very different social types is what has always made America great and cities like New York so special. It’s the rocket fuel of rowdy urban scenes and nightlife all over the world. The mix makes parties fun, communities vibrant, economies dynamic, and polities like ours strong.

But President Trump, who met the First Lady at a Manhattan nightclub during Fashion Week in 1998, seems intent on erecting a massive velvet rope around the country, albeit one that better approximates chain-link fencing or barbed wire. Already in the first months of his presidency, our bullying national gatekeeper has signaled to undocumented youth, people of color, women, Muslims, trans individuals, and others that they do not make America great. As writer Charles M. Blow tweeted:

Donald Trump is saying in every way possible that power in America is white, straight and male and all else are targets. #DACA

The president has triggered a mood that feels nothing short of a national trauma. In the weeks to come, classrooms, and maybe fashion shows too, may offer respites from the regime of rejection that Trump has revved up, but they should also remind us of the power of a truly American mix.