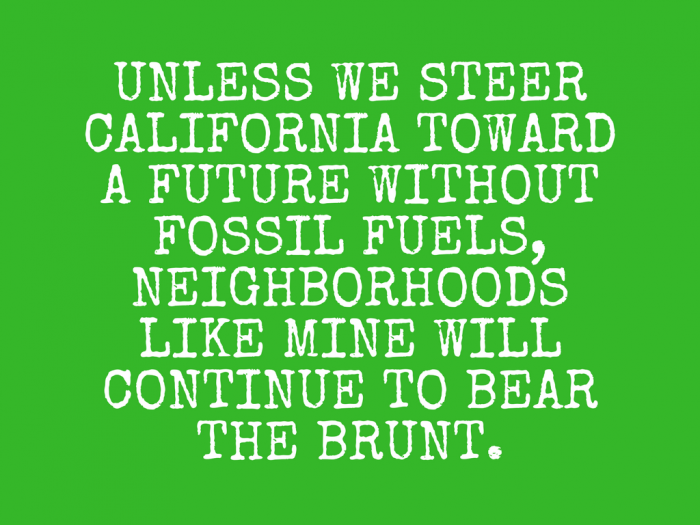 I live in a neighborhood known as Ghost Town in Wilmington, California. We are less than half a mile from the Tesoro oil refinery, and there are a total of five refineries in our community. Multiple freeways crisscross the area, and busy ports are nearby too. Almost all of my family lives on our same block, and most of us suffer from asthma. Under my roof, we could easily confuse our inhalers, but fortunately the one I tuck in my purse every morning is a different color than the one my mother carries and the one my 16-year-old daughter attaches to her backpack.

Our community is nearly 100 percent Latino with a sizable immigrant population. Earlier this year, the local air district approved Tesoro’s plan to merge with the neighboring BP refinery in Carson. When completed, the facility will be the West Coast’s largest oil refinery.

That’s why they call our neighborhood Ghost Town. When we ask for help —from the police, from local officials, from the air district— hardly anyone answers our call.

This week, we finally see signs of hope—a beacon that could even reach Ghost Town. SB 100, sponsored by Senate pro Tem Kevin de León, would set California on a path toward 100 percent clean energy. Friday is the deadline for the bill to either advance or fail.

SB 100 is the relief we desperately need. We need local Assemblymembers like Ian Calderon, Patrick O’Donnell, and our own Mike Gipson to be our voice in the legislature and say yes to clean air for not just Ghost Town but for the LA region and California as a whole. We need Ghost Town to get the same attention and respect as San Pedro and Rancho Palos Verdes.

Unless we steer California toward a future without fossil fuels, neighborhoods like mine will continue to bear the brunt. We already have filters in our bedrooms to clean the air we breathe when we sleep. With the refinery expansion, we know things will get worse.

Out of necessity, my neighbors have found creative ways to control their asthma. They’ve installed sensors inside their homes to track local air quality. They close windows and doors when pollution peaks—even when it’s so hot because they can’t afford air conditioning— knowing an asthma attack could send anyone to the ER.

But still, with harmful toxins in the air we breathe, there’s only so much we can do to safeguard our families from harm. In one house on our block, three generations were wiped out by cancer: the grandmother, the father, and then the son. In another home nearby, a mother died of cancer, leaving young kids behind, and they lost their home as a result. My aunt was also treated for cancer. She survived but eventually had to move out of California.

People in all California neighborhoods should be able to thrive and live their lives with dignity. What we want is simple: to be able to open the window on a nice day and to let our kids play outside without falling ill. Too many Californians, especially low-income families, breathe in unhealthy air that causes senseless suffering and robs us of long life.

With SB 100, California can begin to correct years of injustice. But first, we need our local Assemblymembers to have our back.

Magali Sanchez-Hall lives in Wilmington and is a member of Communities for a Better Environment.